John Chiang
stated on March 23, 2017 in a speech:
"In the first two years and a couple months (as California treasurer), I have saved taxpayers and ratepayers over $5.2 billion."

State Treasurer John Chiang, a candidate for California governor, listens to a question during a gubernatorial candidates forum in 2017. AP Photo/Rich Pedroncelli

California Treasurer John Chiang is known as a fiscal watchdog. But has he saved state taxpayers more than $5 billion?

Chiang made that claim on March 23, 2017 at a Sacramento forum for candidates in the 2018 California governor’s race.

"Today, as your state treasurer, I am your banker. And so, in the first two years and a couple months (as treasurer), I have saved taxpayers and ratepayers over $5.2 billion."

Chiang’s office made a similar statement in a March 9, 2017 press release. It said a recent "refunding of existing bonds at a lower interest rate" had pushed the "total savings to the general public, including taxpayers, from bond refunding (to) approximately $5 billion since Treasurer Chiang took office in January 2015."

That’s a lot of money, even in California where the state budget is nearly $180 billion.

We wondered if Chiang’s claim at the forum was right, and whether there was more to this fiscal story? 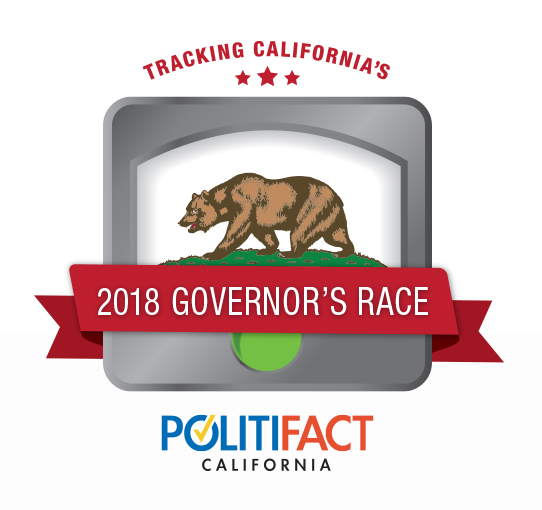 At the forum, Chiang did not explain his claim or offer evidence that he’s saved taxpayers $5 billion. So, we asked his office.

Deputy Treasurer Tim Schaefer told us that large figure represents future savings from refinanced state debt, not an existing pot of $5 billion. The total savings won’t materialize immediately, but rather will add up over decades as bonds are paid off at lower rates.

Still, he said, Chiang "has been very aggressive since he was sworn into office in January 2015 to take advantage of a very favorable interest rate environment."

The treasurer’s office also produced the chart below adding up the future savings, which it puts at $5.5 billion, based on action taken through mid April 2017. 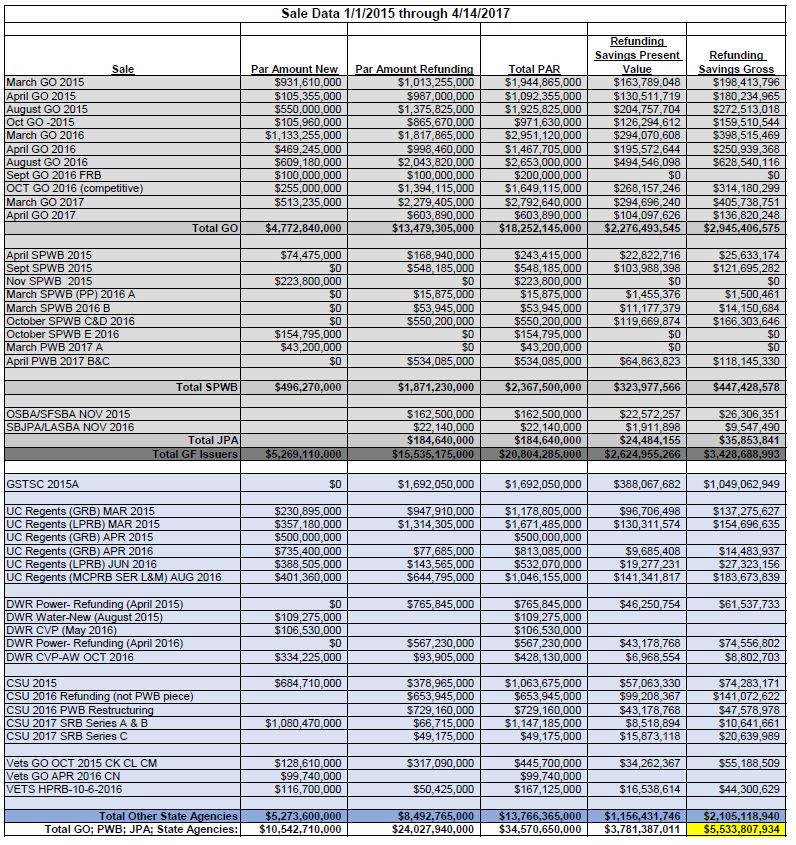 Schaefer compared the treasurer’s efforts to homeowners refinancing a mortgage.

"The fact that it’s over time doesn’t make it any less real," Schaefer continued. "The $5.5 billion that’s not being spent on interest costs and debt service to investors and to big Wall Street firms is $5.5 billion that will be available over time to Californians to provide the services and facilities and programs that they’ve said they need."

We spoke with several finance experts who said Chiang’s number is realistic, though his refinancing efforts aren’t unique.

"Given the scale of California's financings and the continued low interest rate environment, it seems plausible that the state saved over $5 billion gross over many years into the future," Darien Shanske, a UC Davis law professor who has worked as a finance consultant to local governments, said by email.

Jon Coupal, president of the fiscally-conservative Howard Jarvis Taxpayers Association, also said Chiang’s numbers are realistic, though he could not independently verify them.

"Through refinancing, you can save substantial amounts of money just like when you’re refinancing your home mortgage," Coupal said, adding that Chiang has been "a good steward" of California’s tax dollars.

At the same time, he said Chiang’s actions are no different from what any responsible treasurer would do.

California Treasurer John Chiang, a 2018 candidate for governor, recently claimed: "I have saved taxpayers and ratepayers over $5.2 billion," since being sworn into office in January 2015.

And while experts say his number looks right, his timeline isn’t.

He’s taken action that will pile up savings over future decades, a worthy accomplishment. Over time, that will free up money for other uses.

Chiang is right about the total, but wrong to imply this huge amount of taxpayer money is already in the bank.

We rate Chiang’s statement Half True.

Politifact Rating:
Half True
"In the first two years and a couple months (as California treasurer), I have saved taxpayers and ratepayers over $5.2 billion."
John Chiang
California State Treasurer

Los Angeles Times, California's next governor: Who's running, who's on the fence?, March 14, 2017