Travis Allen
stated on February 13, 2017 in a press release:
"The Oroville dam failure was entirely avoidable: California passed a $7.5 Billion water bond in 2014 but Jerry Brown didn't spend $1 on new water storage or improvements to existing infrastructure like Oroville."

"The Oroville dam failure was entirely avoidable: California passed a $7.5 Billion water bond in 2014 but Jerry Brown didn't spend $1 on new water storage or improvements to existing infrastructure like Oroville," Allen said in a press release on Feb. 13, 2017. 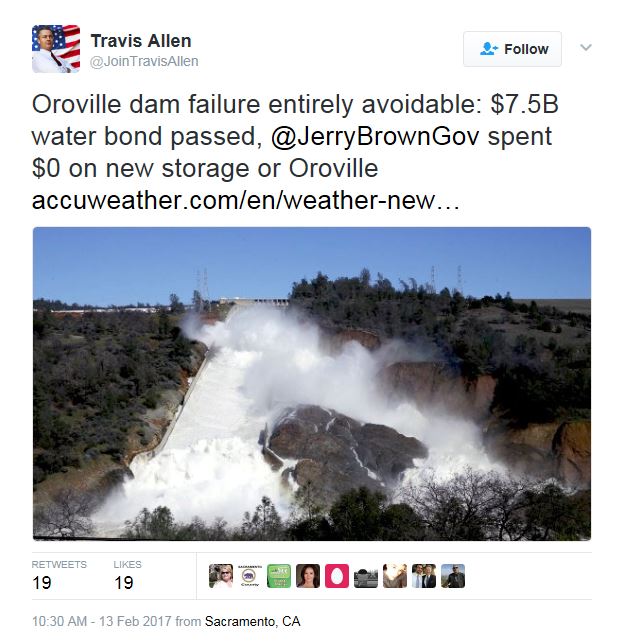 The problems at the Oroville dam are complex. And so is Allen’s claim. We’ll break his statement into parts and assess its overall accuracy.

Let’s be clear: The dam itself hasn’t failed. But its main concrete spillway developed a gaping hole in early February 2017 that led officials to dial back water flows to avoid further damage.

As stormwater and runoff continued to flow in, however, the reservoir overtopped its emergency spillway for the first time in its 48-year history.

The emergency spillway includes a concrete lip at the top and wooded hillside below without concrete fortification.

Rapid erosion took place on Feb. 12, 2017 as water rushed down that unprotected hillside, leading to fears of a major dam breach and forcing the evacuation of nearly 200,000 residents downriver. 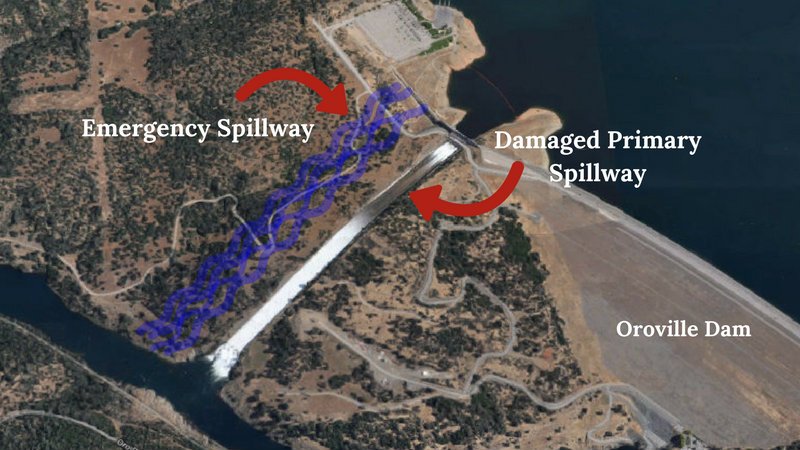 Authorities lifted the mandatory evacuation orders two days later, though concerns over the dam’s safety are expected to continue for months.

Environmental groups warned in October 2005, when the dam was up for a federal license renewal before the Federal Energy Regulatory Commission, that the emergency spillway needed to be armored with concrete to avoid a crisis such as the one that played out this week. And a November 2005 Sacramento Bee article quoted state water officials as saying "Our facilities, including the (emergency) spillway, are safe during any conceivable flood event."

The issue of fortifying that hillside "was brought up in the FERC proceeding," Lester Snow, who was director of the state Department of Water Resources from 2004 through 2009, told PolitiFact California this week. "And I believe FERC, as well as DWR engineers, looked at that and did not consider it to be the kind of threat that it has turned out to be."

"I guess (there’s) some credence," to the idea that the crisis was avoidable, Snow said. "(But) again, we would not have gotten there had it not had the surprising and dramatic failure of the (main) concrete gated spillway."

The main spillway had passed federal and state inspections and those who manage it "saw nothing that would have predicted such a failure in the concrete chute," said Nancy Vogel, a spokeswoman for the Brown Administration’s Natural Resources Agency.

California voters did, indeed, pass a $7.5 billion water bond known as Proposition 1 in 2014. It was approved at the height of the state’s severe drought with the goal of expanding California’s water storage capacity and improving water quality.

It included $2.7 billion for new surface and groundwater storage projects.

3) "But Jerry Brown didn't spend $1 (from the bond) on new water storage or improvements to existing infrastructure like Oroville."

Again, there’s some truth in this part of Allen’s statement. But there’s also a lot of context missing.

State officials said Oroville and other existing State Water Projects are not eligible for Proposition 1 money. Upkeep on the massive system of state reservoirs, dams and aqueducts is paid for by the 29 state water contractors who consume the water, including urban and agricultural water districts.

Asked about using Proposition 1 money for Oroville, H.D. Palmer, spokesman for the state Department of Finance, said: "You couldn’t have done it if you wanted to."

Allen’s additional claim that Brown hasn’t spent any of that bond money on new water storage is also problematic. A spokeswoman for Allen pointed to a state website that tracks Proposition 1 funding and shows none has been allocated for water storage projects.

Brown Administration officials countered that Proposition 1 was not intended to pay for projects overnight. It was a forward-looking measure that aimed to expand and strengthen the state’s water system for future droughts.

Vogel, of the state’s Natural Resources Agency, said Allen ignores the fact that "the storage funding section of the bond precluded any money being spent until December 15, 2016. Travis Allen should remember this since he voted for the water bond," in the Legislature. The bond passed the Assembly with support from all but two members.

Voters then approved it during the November 2014 election.

State officials say there was no indication of problems with the dam’s main spillway, which developed a huge hole this week as officials released large amounts of water from the dam. Officials did, however, have warnings about the integrity of the dam’s emergency spillway, which experienced rapid erosion this week, triggering mass evacuations below the dam.

Environmental groups warned in 2005 that the emergency spillway needed to be reinforced.

Given those warnings, there’s some truth to Allen’s claim that the crisis could have been avoided. But there’s no evidence, at this point, that state officials knew the dam’s main spillway was in jeopardy, something Allen does not point out.

Allen’s other assertion that Gov. Jerry Brown hasn't spent a single dollar from the state’s recent $7.5 billion water bond on Oroville also doesn’t tell the whole story. That dam, and all others along the State Water Project, are ineligible for those funds. Allen's additional claim that the state has yet to spend bond money on new water storage projects, ignores the fact that that money was precluded from being spent until December 2016.

There’s no doubt there’s been a massive failure at Oroville. But Allen doesn’t prove the emergency was "entirely avoidable," particularly given the restrictions on state water bond money.

Allen’s statement includes some aspect of truth. Overall, however, it overflows with misleading claims, ignores critical facts and context that would give a different impression.

Sacramento Bee, Here are answers to your questions about the crisis at Oroville Dam, Feb. 13, 2017