TheNewYorkEvening.com
stated on December 19, 2016 in a headline:
"Donald Trump dead from a fatal heart attack!"

A fake news website is posting a real image of President-elect Donald Trump and using it to draw a bogus conclusion.

"Donald Trump dead from a fatal heart attack!" screamed a Dec. 19, 2016, headline from a site called TheNewYorkEvening.com. The post came with a startling and real image of Trump sprawled out on the ground. The post and photo were flagged by Facebook users as part of the social media giant’s crackdown on fake news.

Obviously Trump is not dead. Reading a newspaper, turning on a TV or radio or going anywhere else on the Internet will prove that.

Bu where is that photo coming from? And is it real?

It is. It comes from Trump's 2007 appearance at WrestleMania 23.

Trump, who knows World Wrestling Entertainment kingpin Vince McMahon, had agreed to the Battle of the Billionaires. In that storyline, Trump and McMahon both chose a proxy wrestler to compete in the annual pay-per-view event, with the loser having his head shaved in front of the roaring crowd.

Facebook posts
stated on September 17, 2020 in a Facebook post
“CBS stole a photo from Latinos for Trump in Phoenix and tagged it as a Biden event.” 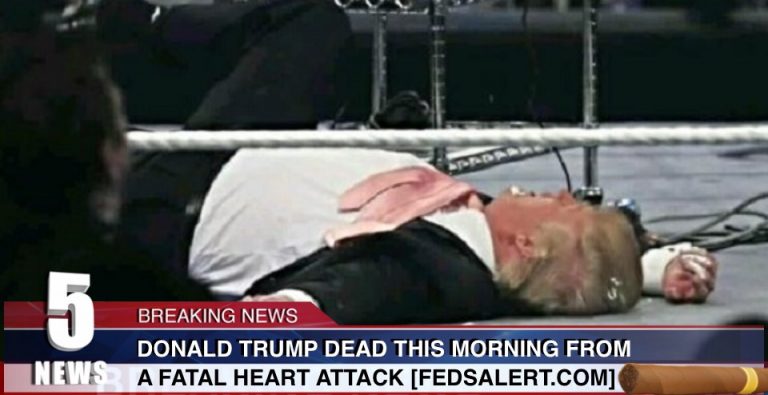 This screen grab of an image on fake news sites implied that it was taken after Donald Trump's imaginary heart attack, but it's actually Trump suffering from a Stone Cold Stunner during Wrestlemania 23.

At the match, Trump clotheslined McMahon prior to Trump’s wrestler winning the match. Trump then shaved McMahon’s head in the ring.

Notably absent from many online clips is what happened next: Guest referee Steve Austin delivered a Stone Cold Stunner to Trump, leaving Trump writhing on the mat. That’s the image being used in the fake news still.

Trump was involved with the WWE for several years after the match. One storyline in 2009 involved Trump buying the WWE’s Raw from McMahon, then selling it back to him for twice the price. Even though the sale was fake, it still caused WWE stock to drop 7 percent at one point.

Trump was inducted into the WWE Hall of Fame in 2013. Three years later, the president-elect tapped McMahon’s wife Linda McMahon, who donated $6 million to a Trump super PAC, to head the Small Business Administration.

TheNewYorkEvening.com seems to mix snippets of real stories, like a recent announcement that Ford Motor Company was abandonding plans to build a new plant in Mexico, with fake ones. The idea is likely to trick viewers.

This claim rates Pants On Fire!

Rolling Stone, "Donald Trump and WWE: How the Road to the White House Began at 'WrestleMania'," Feb. 1, 2016

Metro UK, "Watching Donald Trump get a Stunner from Stone Cold Steve Austin will brighten up your day," Nov. 9, 2016