Bloggers
stated on July 19, 2017 in a headline:
"Barack Obama tweets sick attack on John McCain, says he should have died."

The headline on a July 20, 2017, post on DailyThings.world read, "Barack Obama tweets sick attack on John McCain, says he should have died." Facebook users flagged the story here and on NewsFeedHunter.com as being potentially fabricated, in an effort to cut down on fake news.

The story included an image of a July 19 tweet from Obama that read, "John McCain is NOT a war hero. If there were any God in heaven, he would have died from that brain tumor." The post said Obama quickly deleted the tweet. 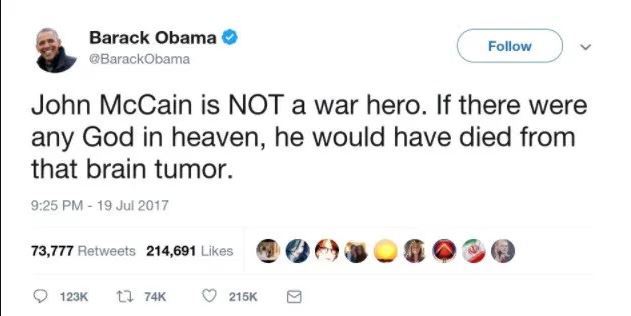 The story came on the heels of the announcement that McCain, R-Ariz., was diagnosed with a brain tumor called a primary glioblastoma. The American Brain Tumor Association said that a 2009 study showed almost 10 percent of patients may potentially live five years or longer. The 80-year-old is considering treatment options.

McCain returned to the U.S. Senate for votes on Republican health care reform, most recently casting a deciding vote against a last-ditch "skinny repeal" bill to end the Affordable Care Act.

But let’s be clear: This story is completely fake.

There was no such tweet for Obama to delete. It was no doubt the product of any number of websites that allow you to create a fake tweet that appears to come from another account.

The only thing Obama tweeted on July 19 were words of encouragement for McCain, whom Obama defeated in the 2008 presidential election.

"John McCain is an American hero & one of the bravest fighters I've ever known. Cancer doesn't know what it's up against. Give it hell, John," Obama wrote.

John McCain is an American hero & one of the bravest fighters I've ever known. Cancer doesn't know what it's up against. Give it hell, John.

The fake story originated the same day on OurLandOfTheFree.com, a parody website with hidden registration information. It appears to be affiliated with a network of websites run by liberal trolls who run fake news sites in an attempt to fool conservatives.

The footer note on OurLandOfTheFree.com said that the site makes "no guarantee that what you read here is true. In fact, it most definitely is not." It echoes the warning on its About Us page.

The story and the tweet it described appeared on multiple outlets, but sprang from a website devoted to writing absurd stories about liberals in an attempt to fool conservatives. Obama’s only tweet about McCain’s brain cancer was encouraging.