Claire McCaskill
stated on October 10, 2017 in a campaign statement:
Says Josh Hawley "broke his promise to create a Public Corruption Unit to crack down on the pay-to-play culture of Jefferson City."

Editor's note, Dec. 7, 2017: The Missouri Democratic Party asked us to take another look at the evidence after this fact check ran in November. The party’s spokeswoman provided us with examples of other units that Josh Hawley created with dedicated staffs. She argued again that the attorney general’s reference to a public corruption "team," rather than "unit," showed Hawley had not fulfilled his promise. We have added those examples, as well as more information from Hawley’s camp. After further review, our rating remains the same.

"He broke his promise to create a Public Corruption Unit to crack down on the pay-to-play culture of Jefferson City," Kirby said.

You can see the full statement below. 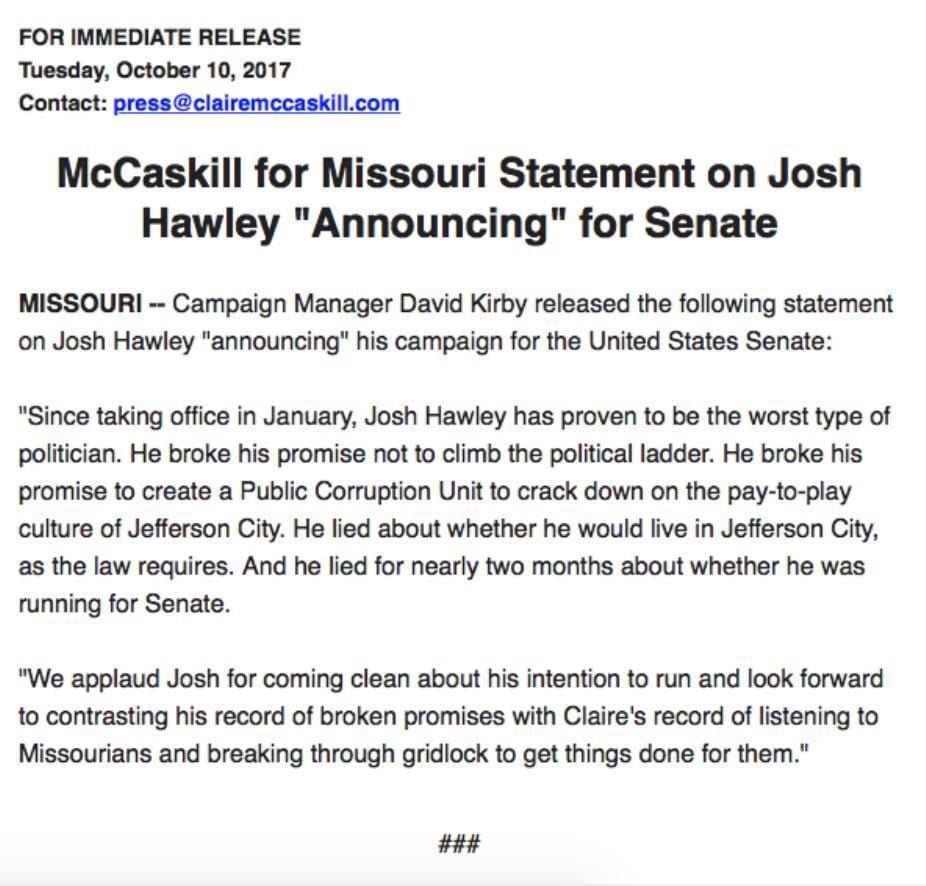 But Hawley’s office says he has kept that promise. Who’s telling the truth? Let’s find out.

During his attorney general campaign, Hawley promised to create a public corruption unit that would "take a more aggressive role in aiding local and federal prosecutors investigating allegations of corruption."

The page defines the group as a team that "actively investigates and prosecutes official abuses of power and other corruption to keep Missouri government honest and clean."

Hawley also referred to problems with "pay-to-play culture" in Jefferson City on the campaign trail. Pay-to-play is usually defined as money in exchange for services.

When we reached out to McCaskill’s campaign for evidence, it pointed us to the Missouri Democratic Party.

The party sent us language it said was from Hawley’s campaign website that specifically promised to use the public corruption unit to end pay-to-play in Jefferson City.

"In addition to a public corruption unit, my ethics reform plan would prevent public officials from getting rich off the system, increase transparency, attack the pay-to-play politics of Jefferson City and ban lobbyist gifts to employees within the A.G.’s office — a ban that should be extended to the Missouri Legislature."

We couldn’t verify that ourselves because that passage no longer exists on Hawley’s website, but the party also pointed us to a quote from a debate Hawley did on 93.9, the Eagle.

"I have a plan to clean it up. I've announced that I would create a public corruption unit in the office of the Attorney General to coordinate local law enforcement, federal law enforcement, to prosecute, investigate and prosecute these public corruption crimes that have come to characterize Jefferson City and it's time that we took these measures," he said on May 17, 2016.

Hawley’s website says he has a public corruption "team," not a "unit."

Meira Bernstein, a party spokeswoman, pointed us to six other units in Hawley’s office that have dedicated staff. They are the Federalism Unit, the Anti-Human Trafficking Unit, and four units in the Public Safety Division.

"There is absolutely no reason he would call the Public Corruption Team a ‘team’ rather than a ‘unit,’ other than the fact that it is different than a unit," Bernstein said.

Here’s where we have to go back to the original promise. Hawley did not promise to create a public corruption unit "with dedicated staff." He promised to create a public corruption unit to "take a more aggressive role in aiding local and federal prosecutors investigating allegations of corruption." Whether he calls it a team or a unit, Hawley’s office provided substantial evidence proving he has done that.

When asked about the team versus unit argument, Hawley’s deputy chief of staff Loree Anne Paradise said, "When you look up the word ‘team’ on Thesaurus.com, ‘unit’ is listed as a synonym."

Though Hawley made some indications he would use the group to address pay-to-play in Jefferson City, it doesn’t necessarily prove what Democrats are claiming.

Why? Because a public corruption team exists.

At the time of Kirby’s statement, the website page listed three cases the team has worked on. It now lists four cases, with the most recent press release dated December 1, 2017. Paradise said there are several other ongoing investigations that are not yet public.

Hawley’s office said they find these public corruption cases in three primary ways. They receive tips from government officials and law enforcement, find cases themselves by actively looking for them and receive complaints issued by the Missouri Office of Constituent Services.

After identifying a public corruption case, Hawley’s office said the investigation process requires complex analysis by a number of attorneys (depending on the case) and takes at least a couple of months.

Bernstein said the party made a Sunshine Request on July 12 for any emails regarding a public corruption unit. The next day, according to the Democratic Party’s timeline, Hawley sent a request that a page be created on his official website.

Paradise did not specify when the webpage was created but said the team was in play months before Democrats’ accusations.

The corruption team has prosecuted officials in Mississippi, Cooper and Cass counties. No state legislators or other Jefferson City officials have been prosecuted.

McCaskill’s campaign manager said Hawley "broke his promise to create a Public Corruption Unit to crack down on the pay-to-play culture of Jefferson City."

Although Democrats contest when it was born and say he hasn’t used the team to crack down on "pay-to-play" in Jefferson City, the bottom lineis Hawley has prioritized prosecuting public corruption and created a team to make it happen.

Regardless of whether the group is a team or unit, Hawley’s office still has a working group of lawyers who have already prosecuted four officials for public corruption.

Missouri Democrats Article, "ICYMI: Hawley Tries to Cover Up the Fact that He Did Not Create a Public Corruption Unit", Aug. 31, 2017.

Roy Blunt
stated on November 19, 2017 an interview on "Meet the Press":
"In the current law, if you report harassment, you're the one that has to go into 20 hours of counseling before you can decide whether you were really harassed."

Claire McCaskill
stated on October 10, 2017 a campaign statement:
Says Josh Hawley "broke his promise to create a Public Corruption Unit to crack down on the pay-to-play culture of Jefferson City."

Pete Hegseth
stated on September 17, 2017 a Fox News segment:
"The city (of St. Louis) is no stranger to violence. There were 5,762 violent crimes in 2015 alone, including 188 homicides. The highest rate per capita in the country, according to FBI crime statistics."

Claire McCaskill
stated on August 22, 2017 a town hall in Monett, Mo.:
"We’re the only developed nation in the world that doesn’t have paid maternity leave."

Derrick Johnson
stated on August 2, 2017 a travel advisory:
"African Americans in Missouri are 75 percent more likely to be stopped and searched by law enforcement officers than caucasians."