Derrick Johnson
stated on August 2, 2017 in a travel advisory:
"African Americans in Missouri are 75 percent more likely to be stopped and searched by law enforcement officers than caucasians."

The first travel advisory in the history of the NAACP was issued Aug. 2 for the state of Missouri over concerns about the safety of African Americans, and once again tensions between law enforcement officers, state officials and minorities were thrust into the spotlight.

The advisory, originally set to expire Aug. 28, was renewed, according to The New York Times. Missouri NAACP President Rod Chapel said it will remain in effect until at least late September.

"The numerous racist incidents, and the statistics cited by the Missouri Attorney General in the advisory, namely the fact that African Americans in Missouri are 75 percent more likely to be stopped and searched by law enforcement officers than Caucasians, are unconscionable, and are simply unacceptable in a progressive society," Johnson said in the statement.

The advisory was issued largely in response to SB 43, which requires employees who claim workplace discrimination prove bias is an explicit reason for being fired, rather than just a contributing factor. It was also in response to a "series of questionable, race-based incidents occurring statewide recently."

We wanted to look into Johnson’s statement about racial disparities in Missouri. Are law enforcement officers a full 75 percent more likely to pull over and search an African American?

When we reached out to the NAACP, communications director Malik Russell said Johnson may have gotten some of his numbers mixed up, since he didn’t have the data in front of him. But he emphasized the larger point, saying the difference between the numbers that he might have mixed up is small.

Russell didn’t give any additional evidence, but the statement announcing the advisory cited data from the attorney general’s office. 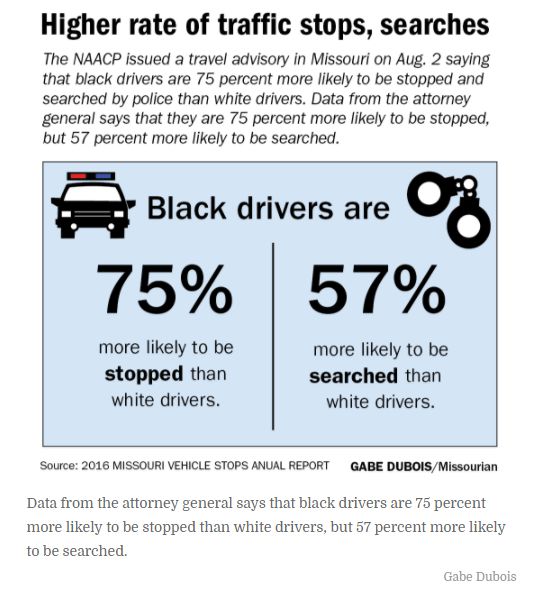 In 2000, concerns from both Missouri residents and the legislature prompted the passage of a law that requires law enforcement officers collect specific information, including race, for every traffic stop. Each agency must provide this data to the attorney general, who in turn sends it to the governor.

A team of researchers has been compiling this information for the attorney general since 2001.

The 2016 Vehicle Stops Report Executive Summary from the attorney general’s office breaks down the data related to vehicle stops last year. There were 21 agencies that did not submit the data by the required date and 58 agencies that reported no stops out of 682 law enforcement agencies in the state.

Richard Rosenfeld, a criminology professor at the University of Missouri-St. Louis, has been on the research team since 2001. 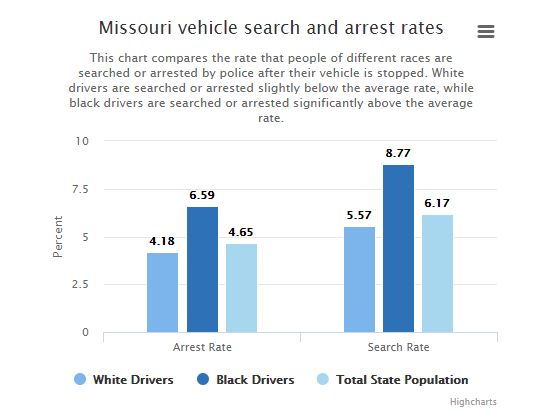 Researchers divided 1.65 by .94 to get 1.75, or a 75 percent higher stop rate for blacks than whites. This is the number Johnson used in his statement.

But stops and searches are different things.

Johnson stated that African Americans in Missouri are 75 percent more likely to be stopped and searched by law enforcement officers than caucasians.

Blacks in Missouri are 75 percent more likely to be stopped by law enforcement officers than whites, which is reflected in the attorney general data.

That’s not true about searches. Blacks are 57 percent more likely to be searched than whites. The discrepancy in searches is huge, but it’s not 75 percent.

We rate Johnson’s statement Half True.

Roy Blunt
stated on November 19, 2017 an interview on "Meet the Press":
"In the current law, if you report harassment, you're the one that has to go into 20 hours of counseling before you can decide whether you were really harassed."

Claire McCaskill
stated on October 10, 2017 a campaign statement:
Says Josh Hawley "broke his promise to create a Public Corruption Unit to crack down on the pay-to-play culture of Jefferson City."

Pete Hegseth
stated on September 17, 2017 a Fox News segment:
"The city (of St. Louis) is no stranger to violence. There were 5,762 violent crimes in 2015 alone, including 188 homicides. The highest rate per capita in the country, according to FBI crime statistics."

Claire McCaskill
stated on August 22, 2017 a town hall in Monett, Mo.:
"We’re the only developed nation in the world that doesn’t have paid maternity leave."

Derrick Johnson
stated on August 2, 2017 a travel advisory:
"African Americans in Missouri are 75 percent more likely to be stopped and searched by law enforcement officers than caucasians."