Jackie Speier
stated on February 10, 2018 in a tweet:
"3 American women are murdered every day by their husband or boyfriend."

The resignation of two White House aides accused of physically abusing their wives has shone a brighter spotlight on the scourge of domestic violence.

President Trump, who initially praised the work of one of the aides and wished him well, said one week after that he is "totally opposed to domestic violence."

Meanwhile, California Rep. Jackie Speier, a Democrat who represents the San Francisco area, weighed in through Twitter with an alarming statement:

"3 American women are murdered every day by their husband or boyfriend." 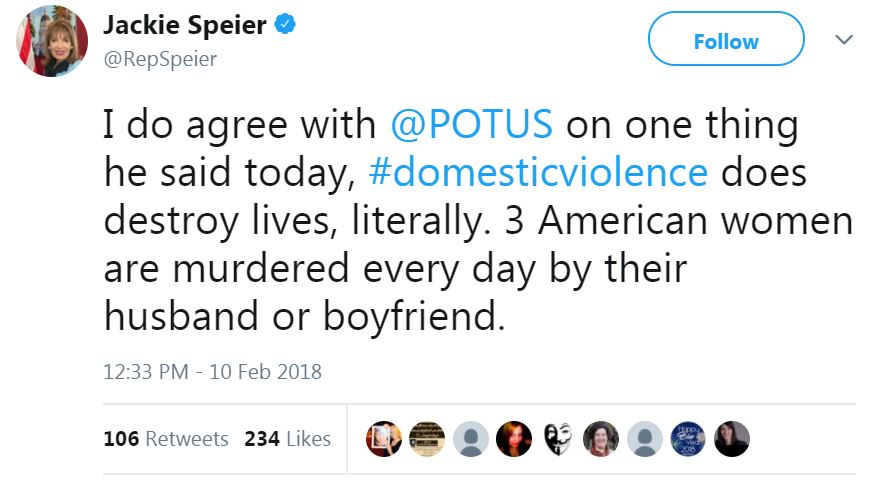 Domestic violence plagues all corners of the United States, no matter a community’s political leanings, economic status or demographic make-up. Still, we wanted to know whether the congresswoman’s provocative claim was accurate and what source of information she relied on.

We set out to fact check Speier’s sad statistic.

Rep. Speier, a survivor of gun violence, has been a strong voice for gun control and for stopping sexual assaults.

Her spokeswoman pointed us to an NBC news article which says "nearly three women are murdered every day in the U.S. by current or former romantic partners."

That’s slightly different from the congresswoman’s tweet, which did not specify former partners. But it’s fairly close.

The NBC article cited data from a 2017 Violence Policy Center report called When Men Murder Women. Representatives at the policy center could not be reached for comment. After examining the report, we found it somewhat supports Speier’s statement, with a few caveats.

It analyzed 2015 homicide data collected by the FBI. It found 928 female homicide victims were "wives or intimate acquaintances of their killers."

That works out to 2.54 female victims killed by an intimate partner on average per day in the United States. While Speier stated "women," ages were not specified in the report.

The report, which is the most complete and current we could find, indicates the assailants were not just husbands or boyfriends, but also ex-spouses and former boyfriends.

Several domestic violence prevention groups have cited the same "three women murdered" figure on their websites. At least two of these, the National Organization for Women and the American Psychological Association, cited data that’s a decade or more older from the Bureau of Justice Statistics, an office at the U.S. Department of Justice.

The National Organization for Women, for example, cited federal statistics from 2005 that show, on average, about 3.2 women were killed per day by an intimate partner in the United States.

Shari Miles-Cohen, senior director of the Women’s Programs Office at the American Psychological Association, said the statistic dates to a 2003 Bureau of Justice Statistics report, but also matches with more recent homicide findings, including from 2013.

We found a note of caution in a 2013 Bureau of Justice Statistics report on female homicides by intimate partners. It warned that the relationship between the killer and homicide victim was unknown for anywhere from a quarter to a third of the homicides in any given year. That’s because an offender was not identified or apprehended, according to the report, which examined the years 1993 through 2010.

Given that missing data, one could speculate the actual number of women and girls killed through the years by intimate partners would be marginally higher.

No matter which report is examined, Gretchen Shaw, associate director of the National Coalition Against Domestic Violence, said domestic abuse is all too prevalent and deadly in the United States.

"It’s much more common than people ever realize," Shaw said.

Speier said in a tweet that "3 American women are murdered every day by their husband or boyfriend."

Several domestic violence prevention groups make the same claim on their websites, though they cite data that in some cases is a decade old. We examined an analysis of 2015 homicide data by the Violence Prevention Center, and found that about 2.5 females were killed, on average, by an intimate partner each day in the United States.

Speier’s statement could have clarified that assailants include former intimate partners, as well as current ones. Also, her tweet references women, though the victims likely include some teenages.

Finally, we found a 2013 Bureau of Justice Statistics report that cautions the relationship between female homicide victims and their killers is unknown in as many as one third of the cases. This makes the actual number of women killed by intimate partners difficult to determine. One could argue the tally is higher than the studies show.

We found Speier’s claim is on the right track, but could have used a few clarifications.

NPR, CDC: Half Of All Female Homicide Victims Are Killed By Intimate Partners, July 21, 2017

The Trace, Once every 16 hours, an American woman is fatally shot by a current or former romantic partner, Feb. 9, 2016