Donald Trump
stated on January 2, 2018 in an email from the White House:
The new tax law is "kicking the American economy into high gear with $5.5 trillion in tax cuts."

In its "1600 Daily" email to supporters and members of the public, the White House touted the tax bill that President Donald Trump signed in late December as a highlight of 2017.

The email said that the new law would be "kicking the American economy into high gear with $5.5 trillion in tax cuts, 1.7 million new jobs, and more than 60 record highs for the Dow Jones index." 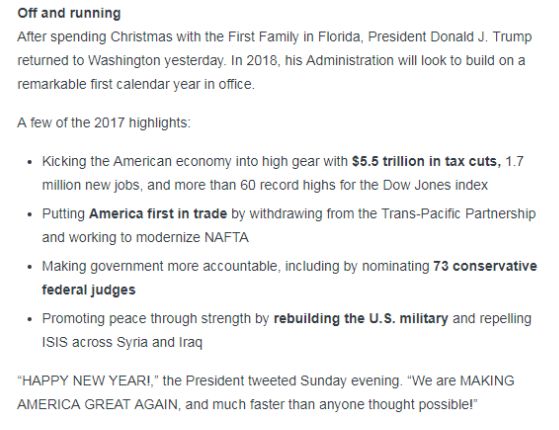 That $5.5 trillion figure caught the eye of a reader, who wrote PolitiFact to note that the figure most frequently applied to the bill in news accounts is $1.5 trillion. So what’s going on?

When we checked into it, we found that $5.5 trillion is a misleading number because it only focuses on one side of the ledger.

The law does include roughly $5.5 trillion in tax cuts over the next 10 years, which is the standard time frame for studying bills of this sort. (This just measures the cuts themselves without taking into account any possible economic growth spurred by the cuts.)

Facebook posts
stated on September 6, 2020 in a text post
Says Joe Biden “wants to put a 3% annual federal tax on your home.”

However, the law also includes roughly $4 trillion in tax increases. When you add the two numbers together, the net change is roughly $1.5 trillion.

So the White House is enjoying its dessert (the tax cuts) while ignoring the vegetables (the tax hikes). That provides a skewed version of the bills, tax policy experts say.

Patrick Newton, a spokesman for the Committee for a Responsible Federal Budget, said that the $5.5 trillion figure "is misleading if it’s the only one cited. If one figure was going to be cited, it should be the net cost of the bill — $1.5 trillion."

He noted, however, that the White House did use a more accurate formulation in a more detailed web page dated Dec. 21, 2017, that explains the bill’s provisions.

On that web page, the White House wrote that the bill "provides $5.5 trillion in tax cuts" but that it will also "raise $4 trillion in revenue to help offset tax cuts."

Email interview with Patrick Newton, spokesman for the Committee for a Responsible Federal Budget, Jan. 3, 2018

Michelle Obama
stated on August 17, 2020 a Democratic convention speech:
“In one of the states that determined the outcome” of the 2016 presidential race, “the winning margin averaged out to just two votes per precinct, two votes.”