Gavin Newsom
stated on May 8, 2018 in a campaign debate:
"In San Francisco, we were successful in reducing our street population 40 percent. We got 12,000 people off the street."

"In San Francisco, we were successful in reducing our street population 40 percent. We got 12,000 people off the street," Newsom said during a gubernatorial debate in San Jose on May 8, 2018.

The event was broadcast statewide on NBC and NPR stations.

Newsom is a Democrat and California’s lieutenant governor. He was San Francisco’s mayor from January 2004 through January 2011. Before that, he served eight years on the San Francisco County Board of Supervisors starting in January 1997.

Polls show Newsom is currently the favorite in the race to succeed Gov. Jerry Brown.

Whoever becomes California’s next governor will be faced with a growing homeless crisis, one made worse by a lack of affordable housing. Homelessness in the state shot up nearly 14 percent in 2017, as it remained flat nationwide, according to federal data and our recent fact check on the topic.

Given the importance of the issue, we wanted to know whether Newsom got his facts right.

Some might interpret Newsom’s statement as meaning the city’s overall homeless population dropped significantly during his time in office. That’s not the case. But because Newsom twice referenced "street population," we examined that category.

Though he doesn’t give a timeframe, we assumed Newsom was speaking mainly about his tenure as mayor. 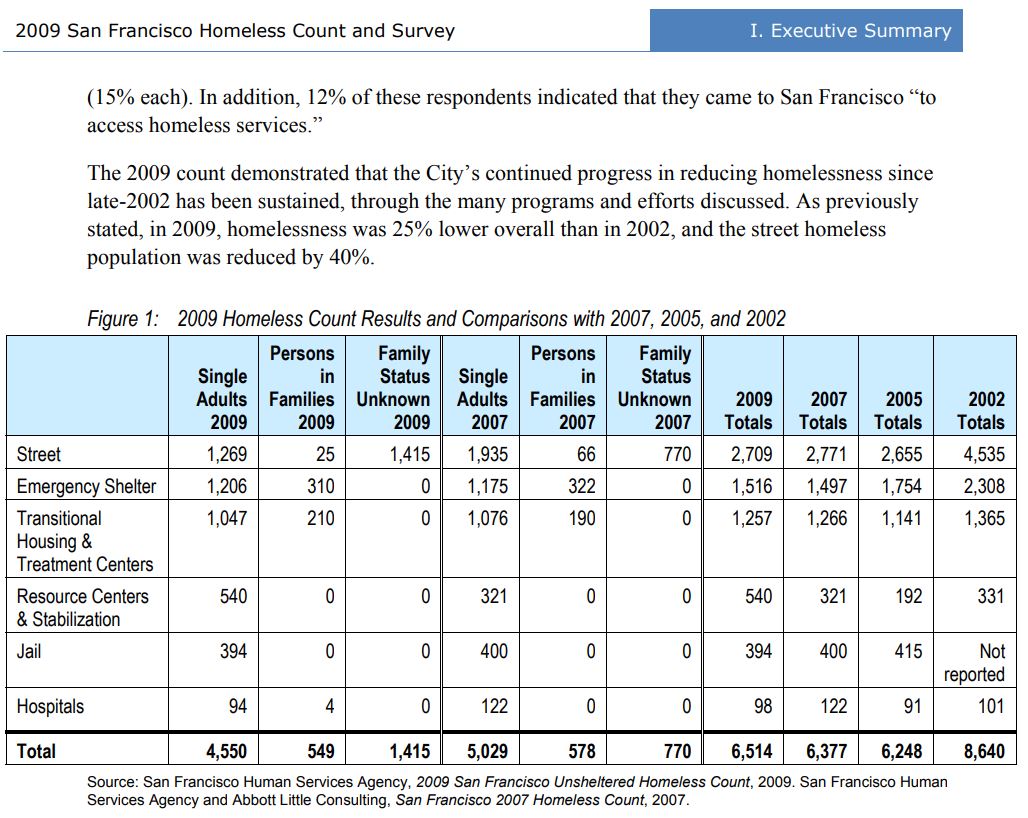 By 2011, however, the city’s street total climbed to 3,100, a gain of about 400 people over Newsom’s final two years as mayor, according to the city survey from that year.

Trent Rhorer, who served as Newsom’s homeless czar, has worked as executive director of the San Francisco Human Services Agency since 2000.

He said the increase during the last part of Newsom’s tenure took place "in the context of a massive recession" that forced many onto the streets.

Rhorer said it was also driven by the shuttering of several nonprofit homeless programs, including two drop-in centers, a shelter and a treatment program when private landlords sold buildings housing those services. Even considering the uptick in the last two years of Newsom’s term, the city’s unsheltered total still decreased by 31 percent from 2002 to 2011, he noted.

The executive director added that the city’s overall homeless population held steady from 2009 to 2011, hovering near 6,500.

"Is homelessness solved? Absolutely not," Rhorer said, but Newsom "got results."

Rohrer also explained the 12,000 figure. He said it represents the total number of people removed from the streets through two strategies from January 2004 through November 2010, a period that nearly spans Newsom’s time as mayor.

The city placed about 7,000 in permanent housing programs, while the remainder left the streets with a bus ticket through Homeward Bound, a program that’s been criticized by some homeless advocacy groups as simply moving the problem to another city.

Chris Herring, a doctoral candidate of sociology at UC Berkeley who studies homelessness, told The San Francisco Examiner in June 2016 the program "should not be used as a policy to boost up numbers or some vision that San Francisco is ending homelessness."

Rohrer described Homeward Bound as a well-vetted and voluntary program that connected homeless street people with caretakers who agreed to take them in. It included three follow-up phone calls by city officials, he said.

Newsom’s statement does not reflect the slight increase in San Francisco’s overall homeless population during his time as mayor. The first available report during his tenure, from January 2005, shows a total of 6,248. By January 2011, Newsom’s final month in office, that number was 6,455.

While the homeless crisis continues in San Francisco, Newsom has been credited as a leader on the topic. A 2010 San Francisco Chronicle article said Newsom had "moved more homeless people into supportive housing in his seven years in office than any other mayor in the city's history - and has one of the best track records of any mayor in the country on that score."

"Yet many of San Francisco's neighborhoods," the article continued, "remain plagued with panhandlers, and residents and tourists alike complain of feeling scared or just plain disgusted."

Candidate for California governor Gavin Newsom recently claimed at a gubernatorial debate that, "In San Francisco, we were successful in reducing our street population 40 percent. We got 12,000 people off the street."

His campaign spokesman pointed to a city homeless survey that shows for one selective window of time, 2002 to 2009, San Francisco reduced its homeless street population by 40 percent.

But that report ignores the last two years of Newsom’s tenure as mayor. Looking at those years, we found San Francisco’s homeless street population jumped by 400, diminishing the reduction Newsom described at the debate.

We interpreted his statement as reflecting his full tenure as mayor, not part of it.

Newsom also spoke of just one segment of the homeless population -- those on the streets, but not the overall total including people in shelters. The overall total has gone up, not down.

His claim that "We got 12,000 people off the street," is supported by statements from his former homeless czar. It’s important to note, however, that the city used Homeward Bound, a bus ticket program, to move about 5,000 of those people out of San Francisco.

Newsom’s overall statement is partially accurate. But the first portion uses a cherry-picked timeframe that ignores the last quarter of Newsom’s term as mayor. The second part of his claim leaves out some key context.

We rate Newsom’s claim Half True.

PolitiFact Rating:
Half True
"In San Francisco, we were successful in reducing our street population 40 percent. We got 12,000 people off the street."
Gavin Newsom
Candidate for California governor

Sacramento Bee, Here's what the candidates for California governor got wrong in last night's debate, May 9, 2018

San Francisco Chronicle, A decade of homelessness: Thousands in S.F. remain in crisis, accessed May 2018

The San Francisco Examiner, SF expanding program that has bused 10K homeless residents out of town in past decade, June 29, 2016