Steve Adler
stated on May 8, 2018 in an interview on KLBJ-AM:
Says Austin is "creating more jobs than any other city in the country."

Austin’s mayor made a best-in-the-nation claim about local job gains that made us wonder.

Steve Adler, who seeks a second term in November 2018, was asked on KLBJ-AM’s morning May 8, 2018, "Todd and Don Show" about ending "the red tape and paperwork that businesses have to go through just to expand in this city."

Adler replied: "You ought to minimize the bureaucracy as much as you can. But we’re doing something right in this city, you guys have to admit, right? We’re creating more jobs than any other city in the country. We have an economy that’s on fire. I mean, we’re doing something right," Adler said, going on to agree that he also wasn’t trying to take personal credit for the gains.

Some background: We recently found accurate an Adler tout of Austin’s jobless rate. From January through March 2018, Austin’s unemployment rate ran shy of 3 percent; the rate had mostly stayed under 3 percent since the start of 2017.

So, we wondered, is Austin flat-out growing more jobs than any other city in the country?

By email, Adler spokesman Jason Stanford told us the mayor made his job growth claim by drawing on U.S. Bureau of Labor Statistics data. Stanford included in his reply a chart from the Austin Chamber of Commerce indicating that between March 2017 and March 2018, the Austin-Round Rock-San Marcos metropolitan area--which takes in five Austin-area counties--saw greater percentage gains in nonfarm payroll jobs than nine other high-growth areas: 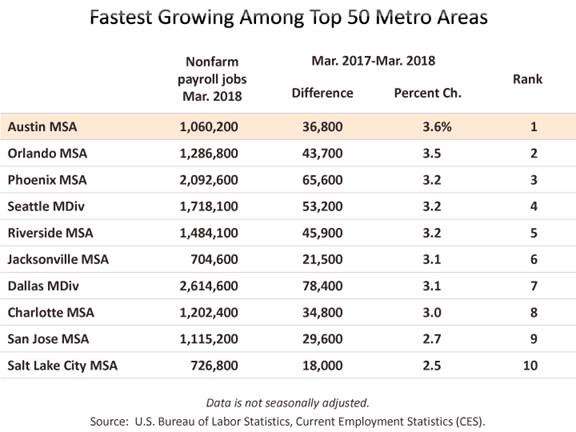 To our inquiry, a chamber expert, Beverly Kerr, pointed out the chamber’s April 2018 web post showing Austin’s No. 1 rank. Kerr also commented: "The mayor might better have said Austin is creating jobs faster than any other major metro, rather than creating more jobs, since some slower growing much larger metros are bound to actually be creating a larger number of jobs."

We sought to look over the figures. So Kerr emailed us what she described as her full fetch of job changes within 426 U.S. metro areas for the selected months, enabling us to conduct our own shake-outs.

We sorted all the figures by percentage gains in jobs--finding that Austin’s 3.6 percent growth placed the area in a national tie with the Idaho metros of Idaho Falls and Pocatello and behind 28 similarly less populous areas, including three in Texas. From March 2017 to March 2018, the Midland area saw a nationally leading 9.9 percent bump, gaining 8,900 jobs; the adjoining Odessa area had a gain of 6.6 percent, 4,700 jobs; and the College Station-Bryan area saw an increase of 4.3 percent with 5,100 jobs gained, the figures indicate.

We also sorted the provided figures by limiting our focus to the nation’s 49 metro areas that were home to 1 million jobs or more in March 2017. Among those areas, the Austin area’s 3.6 percent growth rate as of March 2018 placed it No. 1, we found, though 14 other areas recorded greater raw job gains.

Next, we queried the BLS directly about the mayor’s claim and backup information. By email, Dallas-based economist Cheryl Abbot confirmed that the figures behind Adler’s claim were rooted in the bureau’s supplemental table posted online gauging over-the-year job changes from March 2017 to March 2018 in total nonfarm employment in metro areas with a population of 1 million residents or more as of 2010.

Among the 51 areas clearing the declared population hurdle, Abbot wrote, the Austin area ranked No. 1 in percentage job growth. "And even on a net change basis, Austin ranked 11th on our table (jobs up by 36,800), competing with the likes of NYC, LA, DFW, and Atlanta, among others," Abbot said.

We also consulted Aaron M. Renn, an economist with the Manhattan Institute for Policy Research. Asked to provide a long perspective on the Austin area’s job gains, Renn emailed us a chart based on BLS figures showing that the Austin area topped 52 other metro areas--leaving out many--with a 51 percent uptick in nonfarm jobs from 2000 to 2017; California’s Riverside area placed second with a 46 percent increase. But among the selected metro areas, the Austin area’s raw gain of nearly 350,000 jobs over those years placed the area 10th nationally behind the metro areas of New York, Dallas-Fort Worth-Arlington, Houston, Washington, D.C., Los Angeles, Miami, Riverside, Phoenix and Atlanta, according to the chart.

Adler told the morning radio hosts that Austin is creating more jobs than any other U.S. city.

To the contrary, federal figures show the five-county Austin metropolitan area (not Austin alone) trails some other U.S. metros including the No. 1 Midland area for its pace of jobs gained and it lags more than 25 metro areas in raw jobs gained. It would be accurate to say the Austin area lately has enjoyed greater percentage job gains than other metro areas of 1 million residents or more.

We rate this Adler claim False.

Supplemental table, "Over-the-year change in total nonfarm employment for metropolitan areas, not seasonally adjusted (with a Census 2010 population of 1 million or more)," Bureau of Labor Statistics, last updated May 2, 2018 (accessed May 10, 2018)