Mark Harris
stated on October 10, 2018 in a tweet:
"In our debate, Dan McCready doubled down on his support for Pelosi’s liberal agenda of … impeaching our president."

Elections across the United States have become a referendum on President Donald Trump, and the same is true in North Carolina.

"In our debate, Dan McCready doubled down on his support for Pelosi’s liberal agenda of gun control, disrespecting our flag, and impeaching our President," Harris tweeted after a televised debate on Oct. 10. The tweet was shared more than 160 times.

Is that really what McCready said?

Let’s look at the tape.

The full debate is available on the Charlotte Observer website. Part of the debate is also available on c-span.org, which also has a partial transcript to make the candidates’ comments more easily trackable. (C-Span missed the first few minutes of the debate because it was broadcasting other news)

For this fact check, PolitiFact is choosing to focus on the most specific claim, that McCready wants to impeach Trump.

If you watch the debate, though, you’ll see that McCready said he favors "common sense" gun background checks, without elaborating on what that policy might look like. And McCready said he stands for the flag but added that he understands that someone who’s faced discrimination may kneel "because he or she doesn’t feel heard." 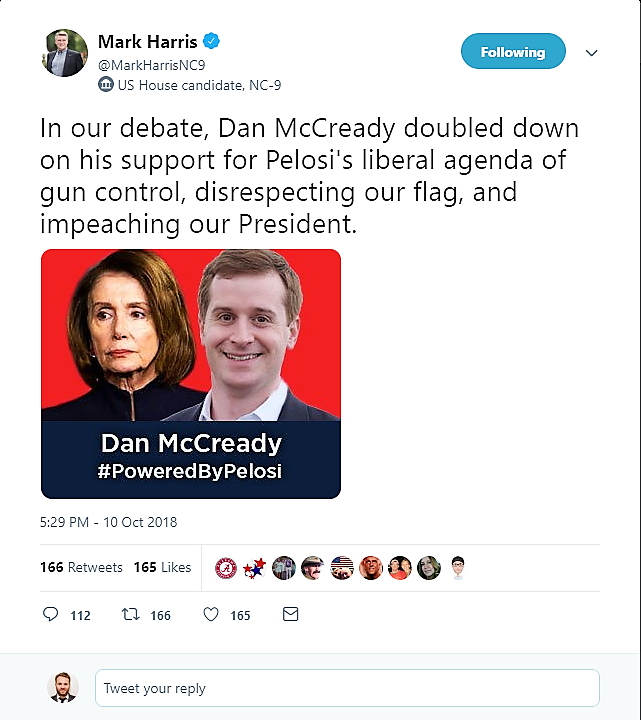 McCready has repeatedly said he won’t vote for Nancy Pelosi as speaker if Democrats gain control of the House. Harris, for his part, pushed back against McCready’s claim that he won’t support Pelosi as speaker, arguing that McCready’s individual vote for House speaker wouldn’t matter in the grand scheme of things.

"There’s a certain naivete, if you will, to think that you’ll go to Washington as a Democrat and not support Nancy Pelosi who frankly is spending that $350,000 ... to run negative ads against me," Harris said. "There’s a reason for that. If Mr. McCready is elected, he just represents a number that would move the Democrats toward a majority." If that happens, "Nancy Pelosi has already done the math. She will become the speaker."

The back-and-forth occurs between the 27- and 30-minute marks of the C-Span video.

Speaker or not, Pelosi herself hasn’t committed to impeaching Trump.

Republicans this election season have raised the possibility that Democrats might impeach the president. But, as our friends at FactCheck.org noted in March, Pelosi hasn’t called for Trump’s impeachment and has voted to table two attempts at impeachment, effectively stopping them. With the election nearing, Pelosi has maintained her position that impeachment isn’t a priority, but she hasn’t ruled it out.

Richard Hudson
stated on January 12, 2023 in a tweet
“Joe Biden’s war on American energy caused this crisis and his only response has been to drain our strategic petroleum reserve to its lowest level since 1983.”

McCready in the debate

So what about McCready? Did he say in the debate that he’d vote to impeach Trump?

Just before the 26-minute mark of the C-Span video, a moderator notes that Democrats could gain control of the House in this year’s elections. If that happens, some Democrats might try to impeach Trump.

"If you get elected, would you support that or would you not?" the moderator asks.

McCready didn’t offer a yes or a no.

Harris didn’t press McCready on impeaching Trump and the conversation moved on.

The Harris tweet says McCready in the debate "doubled down" on his support for impeaching Trump. But PolitiFact could find no evidence of McCready declaring that desire previously.

In fact, several news articles noted that McCready is noncommittal about the prospect of impeachment, specifically. And he’s been criticized for being "too vague."

In August, the Charlotte Observer quoted him saying the same phrase, "I don’t deal in hypotheticals," that he used in the debate. Also in August, the New York Times wrote that McCready "has shown little appetite to talk about impeachment."

The Times story noted, however, that California billionaire Tom Steyer, "who has led a national pro-impeachment effort all year, has pledged $500,000 to aid" McCready.

Harris tweeted that in his Oct. 10 debate with McCready, McCready "doubled down on his support for Pelosi’s liberal agenda of ... impeaching our President."

McCready has consistently distanced himself from Pelosi. Regardless, neither Pelosi nor McCready has committed to impeaching Trump. By not opposing impeachment, they’ve left the door open to the idea. But that’s not the same as publicly stating it’s part of the Democratic or McCready agenda. We rate this claim False.

Video and story by the Charlotte Observer, "Harris, McCready debate in closely watched House race," published on Oct. 7 and updated on Oct. 10, 2018. Story, "A true centrist of too vague? NC congressional candidate plays it down the middle," posted on Aug. 30, 2018.

Story by the New York Times, "Democratic split on impeachment talk: officials avoid it, but voters are eager for it," posted Aug. 24, 2018.

Story by the Associated Press, "Impeaching President Trump 'not a priority' for Democrats, Pelosi says," posted online by the Boston Globe on Aug. 22, 2018.