Martha McSally
stated on August 23, 2018 in a campaign ad:
"While we were in harm’s way in uniform, Kyrsten Sinema was protesting us in a pink tutu and denigrating our service."

Republican U.S. Rep. Martha McSally in a campaign ad paints herself as a stark contrast with Rep. Kyrsten Sinema, her Democratic opponent in the race for Arizona’s open seat in the U.S. Senate.

Side-by-side pictures show McSally in military uniform and Sinema in a pink tutu.

The ad highlights McSally’s service as a U.S. Air Force fighter pilot and portrays Sinema as unpatriotic and out-of-touch with global threats.

"Everyone remembers where they were on 9/11. I was deployed to the Middle East. Led airstrikes against the Taliban and was the first woman to fly a fighter jet in combat. I know the price of freedom.

"While we were in harm’s way in uniform, Kyrsten Sinema was protesting us in a pink tutu and denigrating our service. The world is a dangerous place. We need strong leaders who understand the threat and respect our troops. Kyrsten Sinema fails the test."

PolitiFact wondered about McSally’s claim that Sinema protested troops in a pink tutu, "denigrating our service."

McSally retired from the Air Force in 2010 after 26 years of military service that included six deployments to the Middle East and Afghanistan.

Sinema was a law student at the time who participated in a series of vigils and anti-war protests in Arizona. In at least one of those instances, she wore what looks like a pink tutu. The 2003 event coincided with Women’s International Day, included live music and dancing, and other attendees also wore pink outfits. Sinema described the event as "an expression of creativity and of self."

Sinema’s pink tutu photo has been used against her in previous races for public office, and it’s a real photo. But we didn’t find evidence that Sinema denigrated the service of military members, as McSally’s ad claimed. 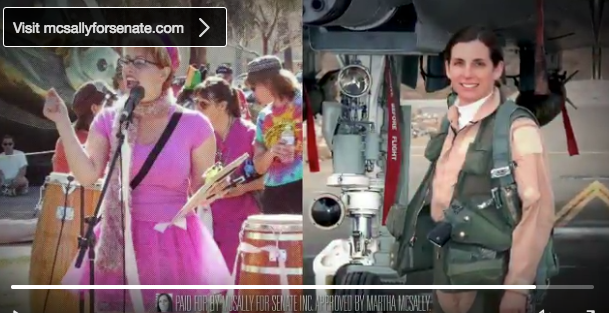 Sinema was a law student at Arizona State University when she was quoted in student newspaper articles as an organizer of protests against the Iraq, which former President George W. Bush ordered March 19, 2003.

The article said Sinema wore "a neon-pink shirt and something resembling a pink tutu."

Sinema told the newspaper, "You protest when you feel like you're not being heard. To make yourself heard, you have to do something out of the ordinary. There, inherently, is this expression of creativity that comes with protests, so you can say, 'I am important. I am a human.'"

The articles don’t quote Sinema as saying anything specifically against the troops. Her comments center on Bush’s policy.

"Since Bush has taken office, he has rolled back civil liberties and provoked war against Iraq. We couldn't not protest," Sinema said in a September 2002 student newspaper article.

Other media reports from early 2000s

The Arizona Republic published a story in February 2002 about silent vigils in Phoenix against war and the abuse of women worldwide. Sinema is quoted as saying that the vigils will continue "til there's no more war."

The story also quotes an ASU professor as saying that the vigils seek to raise awareness about the victims of war, which included the poor, women and "yes, soldiers."

The Arizona Republic included the voice an 18-year-old who was planning to enlist in the Marine Corps. "Everybody has their own opinion," Steve Sullivan told the newspaper. "I'm not offended at all. It's great they come out and protest."

Sinema told the Associated Press for a story on anti-war protesters that a lot of people were worried about the future and felt isolated. "We just want people who are sad, upset, devastated or confused about the war to have a place to meet and be comforted by other people who feel the same way," Sinema said in March 2003.

"Kyrsten has always supported our service members," Helen Hare, a spokeswoman for Sinema’s campaign told PolitiFact. "Reporting from the time confirms that while she spoke out against the war, she also voiced her respect for those who serve — like the members of her family."

The photo in question is from a 2003 protest, it did not happen on 9/11, contrary to what the ad may imply, her campaign said.

Sinema’s campaign also pointed to an Arizona Republic March 2003 article about vigils in opposition to the Iraq war. Sinema told the newspaper that they wanted "to respect and honor those who would be killed. We want those lives to not be sacrificed."

Sinema’s campaign said that her older brother enlisted in the Marines in 1991 and left active duty in 1999; and her younger brother enlisted in the Navy in 2005 and is still on active duty. Sinema has also voted in favor of bills authorizing funding for the military and pay raises for troops, and co-sponsored bills to help veterans receive benefits, her campaign said.

Sinema was first elected to the U.S. House of Representatives in November 2012.

As she campaigned for that seat, she told The Hill in a May 2012 article that while her views had evolved, her approach to dealing with global conflicts had not. "She said she favors aggressive diplomacy, crippling sanctions to combat proliferation, and swift, multilateral intervention as a last resort," the Hill reported.

The Hill story said that in April 2006, Sinema in an online social justice group wrote: "I have always and will always continue to oppose war in all its forms."

But in her interview with The Hill, she said: "You should never take military intervention off the table. When you do so, you give an out to a rogue nation or rogue actors."

For instance, Sinema called for military intervention in places such as Sudan, citing genocide, and wished U.S. troops had intervened earlier in Rwanda and in World War II, The Hill reported.

In September 2015, Sinema was among 25 House Democrats who voted against a resolution to approve the Iran nuclear deal. Former President Barack Obama about a month earlier had said that rejection of the deal "leaves any U.S. administration that is absolutely committed to preventing Iran from getting a nuclear weapon with one option — another war in the Middle East."

Sinema told The Huffington Post after the September vote that it was "hyperbole" and "not necessarily true" that being against the deal meant choosing war. "I’m frustrated by these false dichotomies," she said.

McSally in a campaign ad said, "While we were in harm’s way in uniform, Kyrsten Sinema was protesting us in a pink tutu and denigrating our service."

McSally retired from the Air Force in 2010 after 26 years of military service. After 9/11, Sinema led protests against the war in Iraq. At a 2003 rally called "No War! A Celebration of Life and Creativity," Sinema wore a pink tutu. Media reports of the rallies in 2002 and 2003 quote Sinema as opposing the war and the Bush administration’s policy, but we found no evidence of her disparaging troops.

McSally’s statement contains an element of truth but ignores critical facts that would give a different impression. We rate it Mostly False.

Editor’s note, Sept. 18, 2018: The Senate Leadership Fund and Defend Arizona contacted us after publication to point out that CNN published a story on Sept. 15 saying that a group led by Sinema in the early 2000s distributed anti-war flyers, including one that depicted a soldier as a skeleton. Text in that flyer said, "You can help us push back U.S. terror in Iraq and the Middle East." The Senate Leadership Fund said this was evidence showing the accuracy of McSally’s claim. Sinema’s campaign told CNN, however, that Sinema did not approve or design the flyers. The flyers were not used in McSally's ad claiming that Sinema denigrated troops. McSally's campaign did not send PolitiFact the flyers — or any other material — as evidence for the claim. McSally's ad focused on Sinema wearing a tutu. Contemporaneous reporting of the event in which Sinema wore a tutu did not say that Sinema denigrated troops. Given that the flyer is not evidence that Sinema denigrated troops herself, our rating remains the same.