American Civil Liberties Union
stated on December 22, 2018 in a Facebook post:
"Half the states in the U.S. have laws that criminalize criticism."

The American Civil Liberties Union told its followers on social media that criticizing people can not only get them into lawsuits, but even get them arrested in some states.

"Half the states in the U.S. have laws that criminalize criticism," the ACLU claimed in a Facebook post. An accompanying graphic showed the map of "States Where Criticizing People Can Get You Arrested". 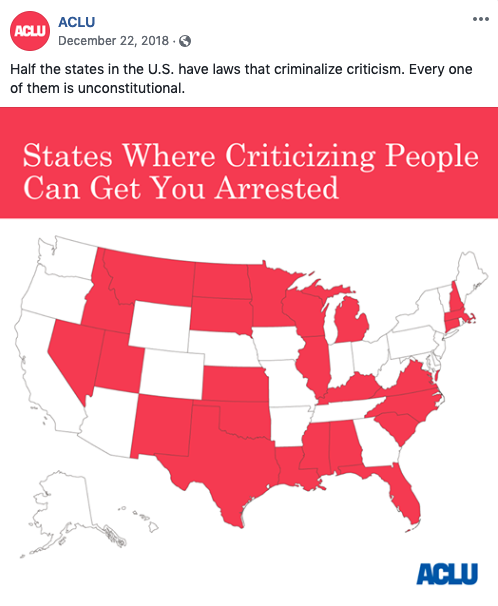 The Facebook post was shared more than 1,300 times with many comments asking for more context or explanation. Some questioned if the term "criticism" was being conflated with "defamation."

Our readers flagged this claim and asked us for a fact-check. We asked First Amendment lawyers and experts who said the claim is overly broad.

What the ACLU says

In a web article, the ACLU backed up its post by stating that 24 states have laws "that make it a crime to publicly say mean things about people." An interactive map links to different states’ criminal defamation provisions in state law.

"These laws violate the First Amendment and are disproportionately used against people who criticize public officials or government employees," the ACLU said.

Abdullah Hasan, a communications officer at the ACLU told PolitiFact that the Facebook post was part of the social media campaign launched in December 2018, after the organization filed a lawsuit on behalf of Robert Frese to challenge the criminal defamation law in New Hampshire.

Frese, an Exeter resident, was arrested by the Exeter Police Department for commenting on a news article that the police chief "covered up for this dirty cop."

The ACLU post was to raise awareness about criminal defamation laws, which gives public officials the option to interpret defamation and arrest people because of criticism, the ACLU said. The group’s position is that defamation cases should be handled in civil court only and not be subject to criminal penalties.

Anti-defamation provisions have been around as early as the period before the American Revolution, with roots from British common law and the oppression of sedition under the colonial rule. In many states, defamation was viewed as "breach of the peace" when the criminal provisions were first conceived.

What do the laws say?

The 24 states highlighted by the ACLU do have criminal libel statutes, constitution and codes on the books, though many have restrictions on these provisions. The problem with the post is that the ACLU is calling these statutes "criticism," when in most cases the statements have to be a factual assertion, defamatory and false to be subject to prosecution.

Jessica Goldman, a First Amendment lawyer and partner at Summit Law Group in Seattle, Washington, said that "criminalize criticism" is an overbroad way to put it.

For instance, in Illinois, someone could be prosecuted for libel only if they publish false and derogatory statements about banks’ financial condition. North Carolina prohibits people (including reporters and editors) from running false statements in newspapers or periodicals to defame others and corporations. In Kentucky, the statute only states that the court may bring criminal action for libel or slander when court judges are concerned.

Lucian T. Pera, a First Amendment expert and partner at Adams and Reese, LLC, told PolitiFact that states "don’t criminalize any criticism, under any circumstance, and each law typically requires proof of more than mere criticism. There’s usually a level of falsity required, and usually some element of intent."

In almost every state that the ACLU claimed to have criminal libel or slander law, truth is a defense to libel. This provision grants immunity to the disseminator of defamation if the statement is true. In addition, in many states, defamatory remarks are also justified when the communication is privileged, such as in legal proceedings.

A rarely used law remaining on the books

Still, some state laws that are unconstitutional remain on the books. The Supreme Court, for example, ruled in Garrison vs. Louisiana in 1964 that Louisiana’s criminal libel statute was unconstitutional for failing to establish a standard demonstrating actual malice. (The actual malice standard for civil libel was established in Sullivan vs. New York Times that same year.)

Even after the ruling, the Louisiana criminal defamation law remains on the books, and the ACLU counted it as part of the graphic.

Prosecutions do happen, however. Eugene Volokh, a law professor at the University of California - Los Angeles, collected data on criminal defamation prosecutions and wrote that they happened about 10 to 20 times a year and often lead to conviction.

But that doesn’t mean those convictions are invalid. Volokh told PolitiFact that more recent statutes are "likely constitutional precisely because they ban knowingly false factual assertions that injure someone’s reputation — libel — and not just 'criticism.' "

The ACLU said that "half the states in the U.S. have laws that criminalize criticism."

While almost half of the states do have criminal defamation provisions, to say that these laws criminalize criticism is an overstatement. It fails to represent that the goal of such laws is to criminalize only criticism with actual malice and untruth to hurt others’ reputation. Truthful criticism or opinion would not be subject to prosecution. Even some false statements would be defensible as long as they weren’t made with ill will or reckless disregard.

The Volokh Conspiracy, Criminal Libel Laws Are Constitutional If They're Limited to Deliberate Lies, Jun. 6, 2018

International Press Institute, "Criminal Libel in the Land of the First Amendment", September 2015

Cory Booker
stated on May 6, 2019 a Medium post:
"Nowadays, there is more regulation over toy guns than real ones."

John Delaney
stated on April 13, 2019 a Tweet:
"Most of home care is paid by government programs."

American Civil Liberties Union
stated on December 22, 2018 a Facebook post:
"Half the states in the U.S. have laws that criminalize criticism."