Phil Scott
stated on January 24, 2019 in his budget address in the Statehouse.:
"Every county, including Chittenden, has fewer people available for work."

Gov. Phil Scott is determined to turn around the decline in Vermont’s workforce.

The demographic woes facing Vermont’s employee pool was the focus of Scott’s inaugural address two weeks ago and again front and center during his budget address this week.

"As I have said many times, I believe our biggest threat is our declining workforce. It is the root of every problem we face," the governor told members of the House and Senate gathered in the Statehouse on Thursday.

Underlining his point, Scott said the entire state was feeling the pain.

The governor’s remark seemed to challenge conventional wisdom that Chittenden County, home to Vermont’s largest city and 26 percent of the state’s total population, is somewhat immune to the demographic struggles facing the rest of the state.

But is the governor right? We decided to break down the data ourselves to find out just how hard Chittenden County has been hit by the demographic downturn being felt elsewhere (Essex County, for example, has seen a 20 percent decline in its labor force).

Rebecca Kelley, the governor’s spokesperson, said his source for the claim was the economist for the Vermont Department of Labor. "As advised by our Department of Labor economist, ‘fewer people available for work’ refers to the technical term ‘labor force,’" she said in an email.

So we turned to the Department of Labor’s most recent labor force data, released on January 18. (After publication of this article, Kelley said calculations using this data were premature -- though there is no indication that the data is provisional. She said figures will be finalized in March.) 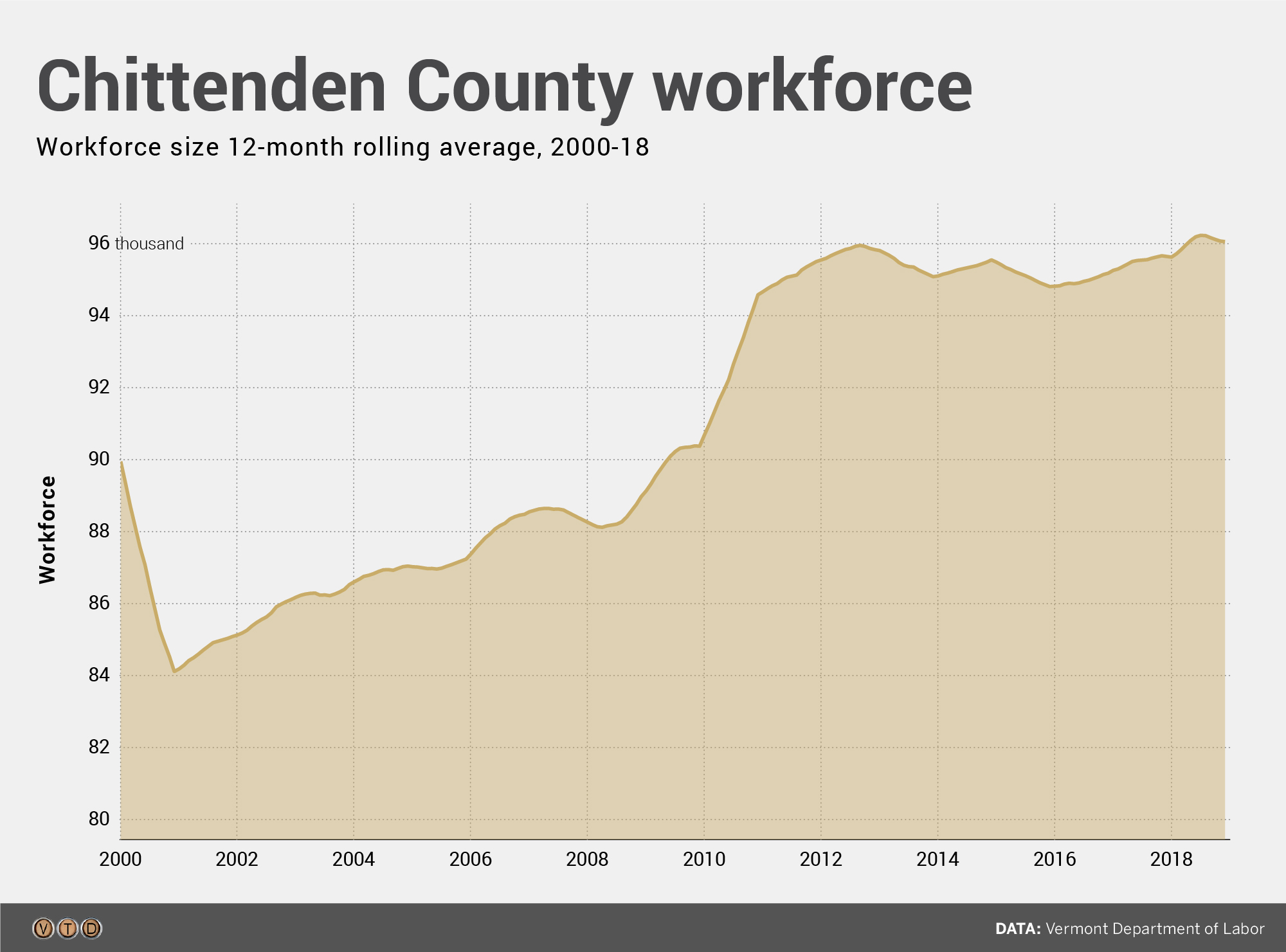 That figure dropped for the next year, then went up a bit in 2014, then dropped again until it bottomed out at an average of 95,181 in January 2016. But since then it’s been rebounding.

In mid-2018, Chittenden County’s labor force cracked 96,000 people for the first time ever. The high point was 96,191, in June. There was a drop-off in the second half of 2018, but seasonal changes in the labor force makes month-to-month data meaningless as an indicator of trends.

If Scott had made the claim during his budget address last year, he would have been on solid ground: 2017’s average labor force was lower than the 2012 figures by about 190 people. (We suspect the governor was using old data, based on the spreadsheet Kelley sent us)

But even then, the statement would be missing some crucial context. Chittenden County’s labor force has been rising steadily for two straight years. And there’s been a steep upward trend since 2000, when the labor force was just 85,086 on average.

That’s not to say that Vermont isn’t facing a serious decline in its labor force. In 10 of the state’s 14 counties, there is a clear downward trend in the labor force (Washington, Franklin and Grand Isle are fairly stable).

The governor may have been relying on old information when he said Chittenden County has fewer people available for work today than in the past.

But if we could find the correct data, his staff probably could have done the same.

The Department of Labor’s most recent labor force report—which came out before his budget address—shows that Chittenden County’s labor force reached an all-time high in 2018.

We rate the governor’s claim false.