Matthew Birmingham
stated on March 16, 2019 in a press release:
"Now there is a new threat that we’re seeing up close: the risk of exposure to powerful drugs that can kill in even tiny amounts."

Vermont’s state police director seemed certain that he knew what caused one of his troopers to collapse this weekend in a parking lot following a traffic stop during which the officer seized a small baggie of heroin from the vehicle. Exposure to whatever was in the baggie.

"Testing is underway to determine the substance to which Sgt. Flansburg was exposed," Vermont State Police said on Saturday.

Col. Birmingham said the officer, Acting Sgt. Brett Flansburg, could have died from an overdose if not for the speedy response by fellow troopers and medical professionals, who revived him with three doses of the opioid antidote Narcan.

Being a state trooper is dangerous enough with duties like apprehending criminals, dealing with volatile individuals, and rushing toward emergencies, Birmingham said in the statement.

"Now there is a new threat that we’re seeing up close: the risk of exposure to powerful drugs that can kill in even tiny amounts," Birmingham said. "This is so troubling and disconcerting, and it places members of law enforcement at unnecessary risk of possibly losing their lives."

"Were it not for the immediate availability of Narcan and the quick actions of his fellow troopers and medical personnel, we might be speaking today about the death of a trooper in the line of duty," he added. "I’m angry at how close we came, and relieved that the situation was no worse than it was."

VTDigger was among a number of local news outlets who reported on the press release. Within hours of publishing, a number of readers told us Birmingham was mistaken.

They said the scenario he was describing was simply not possible, even though similar stories have popped up in Michigan, Massachusetts, Pennsylvania and Ohio, where a police officer reportedly overdosed after brushing fentanyl residue off his uniform.

Vermont police have not yet released any test results. But we decided to go ahead and fact-check the underlying claim in Birmingham’s statement. Do police face a deadly risk from incidental exposure to small amounts of powerful opioids?

We reached out to VSP spokesperson Adam Silverman to find out where Birmingham got his information.

Silverman declined to comment further on the connection between Flansburg’s collapse and the drugs he seized. But he did send us guidance from the Centers for Disease Control and Prevention and U.S. Customs and Border Protection, including a video advising first responders on how to deal with fentanyl and its analogs.

It’s certainly true that fentanyl and other synthetic opioids are highly dangerous. The customs agency cites statistics showing that 19,413 Americans lost their lives to synthetic opioids in 2016, up 639 percent from 2012. But those people were actively injecting or ingesting the drug, not having incidental contact.

"One myth is that just touching any amount of fentanyl is likely to cause severe illness, or injury or even death. And that’s just not true," Dr. David Tarantino, a senior medical advisor to the customs agency, says in the CBP video.

Tarantino says that fentanyl can be washed off with soap and water (not hand sanitizer, which can increase absorption), and that first responders can protect themselves with protective equipment like gloves and a face mask.

"Exposure can come in many ways," he adds, "through skin contact; through the mucus membranes of your mouth, your eyes; or the most significant risk is from aerosolized, airborne powder."

"Avoid exposure to cuts, scrapes, broken skin, or mucus membranes (eyes, nose, mouth)," he is quoted as saying. "Most important, avoid turning the opioid into an air-born danger and breathing it in, as inhalation increases the risk."

The other piece of evidence Silverman provided was from the CDC, which offers similar advice for first responders who come into contact with fentanyl.

"Potential exposure routes of greatest concern include inhalation, mucous membrane contact, ingestion, and percutaneous exposure (e.g., needlestick)," the CDC says. "Any of these exposure routes can potentially result in a variety of symptoms that can include the rapid onset of life-threatening respiratory depression."

However, medical toxicology organizations and emergency physicians across the country say law enforcement officers have it all wrong when it comes to the occupational risk of fentanyl.

They say that something is happening to the officers, who report feeling dizzy or losing control of their body, but not signs of opioid toxicity such as respiratory depression.

Donald Trump
stated on January 6, 2023 in a campaign website
As president, Donald Trump “marshaled the full power of government to stop deadly drugs, opioids, and fentanyl from coming into our country. As a result, drug overdose deaths declined nationwide for the first time in nearly 30 years."

Emergency physicians Dr. Jeremy Faust, an instructor at Harvard Medical School, and Dr. Edward Boyer, an associate professor at Harvard, wrote an op-ed for the New York Times after Massachusetts banned fentanyl and carfentanil from being brought into courts as evidence. 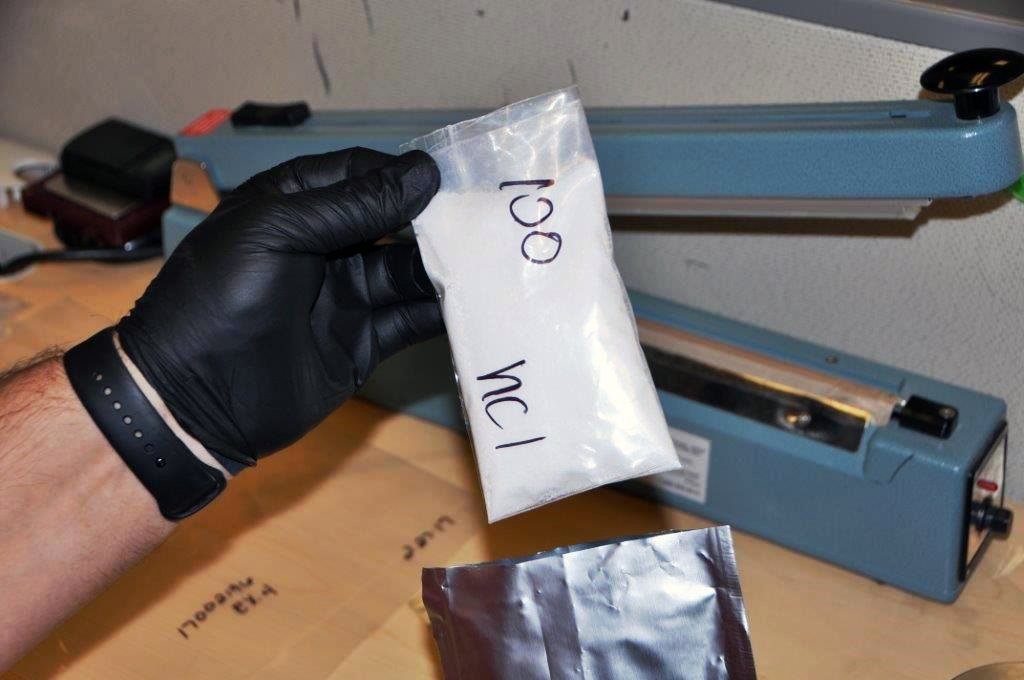 "The policy is based in part on the idea that even minuscule amounts of skin exposure to these drugs can be life-threatening," they wrote. "This is patently false — and we fear that it will worsen what is already a public health crisis."

The physicians wrote about two separate stories in Ohio, both widely disseminated in local and national media, about a police patrolman and three nurses coming into contact with potent opioids and needing to be revived with Narcan.

"Both stories are examples of the post hoc ergo propter hoc fallacy:" they wrote "Just because somebody received naloxone and later recovered is not by itself proof that the medication had any more effect than that other tried-and-true antidote for what are likely to have been severe panic attacks: time."

Dr. Andrew Stolbach, a physician at Johns Hopkins Medical Center and lead author of the paper, told STAT that many of the scenarios and symptoms described by law enforcement officers didn’t align with what would cause an overdose, and what an overdose would feel like.

"A lot of the symptoms are nondescript, such as vague dizziness, that don’t concern opioid poisoning," he said. "And in a lot of the cases, the way that they were exposed doesn’t make sense, like brushing a small amount of powder off a uniform."

So touching fentanyl briefly won’t cause immediate medical problems. But can inhaling it cause an overdose? Probably not in the limited amounts that first responders are likely to encounter at a crime scene, the medical toxicologists say in their paper.

Dr. Howie Mell, an emergency physician in the Chicago area and spokesperson for the American College of Emergency Physicians, said it’s highly unlikely that someone would overdose by inhaling fentanyl, unless it had been weaponized (as happened in a raid on a Russian theater).

Even for industrial workers who manufacture fentanyl, it would take nearly 200 minutes of exposure to reach a dose of 100 mcg, enough to have a therapeutic effect but not to cause an overdose, he said. And fentanyl factories are likely to have higher concentrations in the air than a crime scene.

Mell said the reason that CDC guidance seemed to contradict other advice was because it was taking the most cautious position possible.

It’s true that fentanyl can penetrate skin, if people are exposed to large amounts for hours. And it can be toxic in the air if it has been "aerosolized" in large amounts. Both are highly unlikely, but can’t be entirely ignored as a scientific possibility, he said.

"We also know that none of the cases where law enforcement officers have been suspected of coming into contact in this fashion -- none of them have tested positive," he said.

Having seen the rise in opioid deaths inside the hospital, Mell said he understood why law enforcement officers would be psychologically scarred by it all.

"It’s body after body, and that takes its toll, it just does, it’s scary, and even experienced, well intentioned law enforcement officers have to be going home the same way emergency physicians are, and saying ‘What’s happening?’" he said.

"I get why people are afraid of this," he added, "it’s not a fault of character, it’s not a wilful thing, it’s a mind protective response."

Mell said the belief that exposure to tiny amounts of fentanyl can lead to overdoses was dangerous for two reasons.

The fear of incidental contact could cause first responders to slow down when responding to an overdose, when time is of the essence. And it could lead to false diagnoses. If a police officer collapses from a heart attack, for example, Narcan is not the right response.

Col. Matthew T. Birmingham said: "Now there is a new threat that we’re seeing up close: the risk of exposure to powerful drugs that can kill in even tiny amounts."

It’s not clear what happened to Flansburg, the state trooper. But Birmingham went beyond the specific incident to make a broader statement about the mortal risk to law enforcement officers from exposure to tiny amounts of powerful opioids.

Even without protective gear, the scientific and medical communities are clear: incidental contact with small amounts of fentanyl will not cause an overdose.

NBC10 Philadelphia, With Opioids So Strong, Here’s How DEA Agents Protect Themselves, Sept. 29, 2017.

STAT, "Are people really falling ill from touching fentanyl? In most cases, scientists say no," Aug. 9, 2017.