Kamala Harris
stated on May 20, 2019 in an interview on MSNBC:
On the need for independent investigations of police shootings

"Kamala Harris’ latest flip flop is her new-found support for independent investigations of police shootings," reads an article posted by the America Rising PAC, which conducts opposition research against Democrats and was founded in 2013.

Harris served as California’s attorney general from 2011 through 2016 and before that as San Francisco’s district attorney. She was elected to the U.S. Senate in 2016.

A number of critics on the left have labeled her a defender of the criminal justice system’s status quo — one that disproportionately punishes the poor and people of color — and not the progressive leader that she claims to be. On the campaign trail, Harris has described the system as "deeply flawed," and in need of reform.

To support the flip-flop claim, America Rising cited Harris’ comments in a May 20 interview on MSNBC’s "The Beat with Ari Melber."

Melber asked Harris: "What’s the best way to deal with police shootings and alleged police brutality?" Before she responded, he cited calls by reform advocates to require independent investigations of police shootings and then read a quote from Harris in a December 2014 San Francisco Chronicle article, which said: "I don’t think it would be good public policy to take the discretion from elected DAs (district attorneys). Where there are abuses, we have designed the system to address them."

Melber continued: "As you know in the wake of many of these incidents the view is by some that the independent probes are better to not let the DA investigate the cops they work with daily. Have you changed your mind about that or what is the best approach?"

Harris responded: "I believe the best approach is to have independent investigations."

She added a moment later: "This is an issue about what we need to do when it comes to these shootings, and I think we are all very clear that there has to be an independent investigation conducted from first moments of the incident so that we can be certain and sure there’s been a thorough investigation that is not informed by bias and so that there will be justice all of the people concerned."

In a news article, Politico reported "Harris’ remarks on the subject Monday appear to be the first time she’s advocated for a blanket approach to independent probes." A CNN.com report called it "a change in her stance on the issue."

Has Harris changed her stance? We’ll use PolitiFact’s Flip-O-Meter, which rates an official's consistency on an issue.

We’re not rating the claim by the Super PAC or news reports, but instead examining whether and how much Harris’ position has changed.

It has three ratings:

NO FLIP – No significant change in position.

HALF FLIP – A partial change in position.

The rating does not make a value judgment about a politician who changes positions on an issue. Some voters appreciate politicians who are flexible and have the ability to compromise or adapt their positions to the wishes of voters.

Still, accusations of shifting positions are common in politics, and we’ve found that an analysis of the shift and the degree of change can be informative.

Harris’ words in the 2014 Chronicle article show she previously opposed taking away the authority of local district attorneys to probe police shootings. Harris explained in the MSNBC interview that her resistance stemmed from her own fight as San Francisco district attorney to exercise discretion over an investigation, in that case over a probe into the shooting death of a police officer.

Comments Harris made in 2016, during her run for U.S. Senate, reinforce the fact that she continued to oppose independent probes. At the time, state lawmakers were debating Assembly Bill 86, which would have required the attorney general’s office to appoint a special prosecutor to examine fatal shootings by the police.

In a fact check earlier this year, The New York Times found Harris did not technically take an official position on the bill but "had repeatedly expressed disagreement with its aims and declined to support the bill."

The Sacramento Bee in May 2016 reported that, "In an interview, Harris said she didn’t support the measure, Assembly Bill 86, because it would have taken discretion from district attorneys. Unless they have been shown to abuse their powers, she thinks they should retain them. Harris disputed that her relationship with law enforcement had bearing." 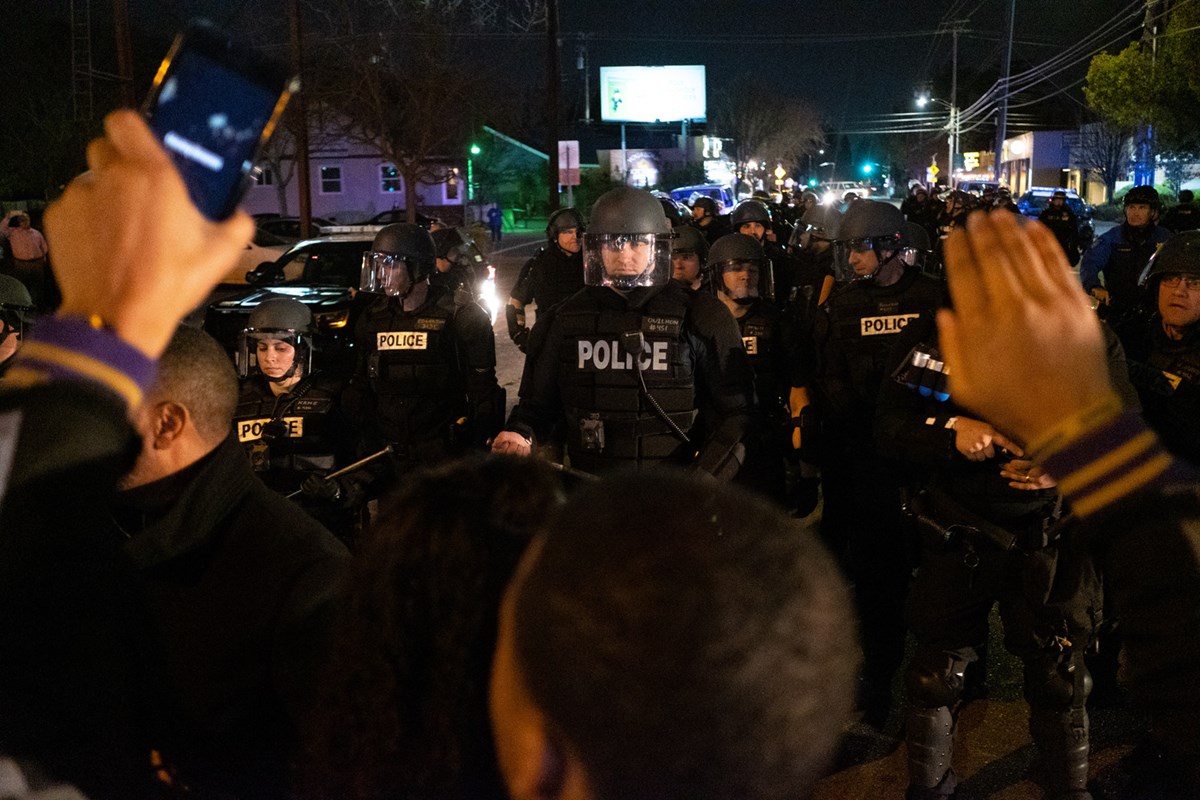 Police in Sacramento in March 2019 block protesters following a demonstration over the decision not to charge the officers who shot Stephon Clark. Andrew Nixon / Capital Public Radio

A Harris campaign spokeswoman declined to talk about how much the senator’s stance has shifted. But she clarified that Harris now believes independent probes into police shootings should replace those by local district attorneys, and not just take place in addition to them.

A September 2016 Chronicle article describes her request to state leaders for "the necessary resources to create new teams within the attorney general’s office to conduct criminal investigations of officer-involved shootings." That budget request was denied.

The spokeswoman also cited a Washington Post fact check from this year. It outlines comments from state Asm. Kevin McCarty, the author of AB 86. While Harris did not officially endorse the bill, McCarty told the Post that she expressed support for it a year later by making the state budget requests.

"She did come around, and I was very pleased," McCarty told the Post. "I think she had to walk a fine line being the state’s top cop and the practical purposes of such a position, and the fact that she had experience coming up as a DA."

In 2018, after the fatal Sacramento police shooting of Stephon Clark made national headlines, Harris also stopped short of calling for an independent probe. She spoke at a Sacramento town hall shortly after the shooting about the need for implicit bias training for police, but did not ask for the probe to be taken away from local prosecutors.

Sen. Kamala Harris said this week police shootings should undergo independent investigations rather than having local district attorneys handle them.

News reports and a Republican Super PAC called this an about-face.

A review of her public statements shows Harris opposed taking investigative authority away from local prosecutors in 2014.

Two years later, she declined to endorse a bill to require her attorney general’s office to appoint a special prosecutor to examine fatal shootings by the police. She also did not call for this change after a high-profile fatal police shooting in Sacramento in 2018.

Her campaign pointed to Harris’ behind-the-scenes efforts, as attorney general, to request funds for independent prosecutors. But she did not publicly change her stance until her comments this week on MSNBC.

Click here for more about PolitiFact ratings and how we select facts to check.

It has three ratings:

NO FLIP – No significant change in position.

HALF FLIP – A partial change in position.

The rating does not make a value judgment about a politician who changes positions on an issue. Some voters appreciate politicians who are flexible and have the ability to compromise or adapt their positions to the wishes of voters.

Still, accusations of shifting positions are common in politics, and we’ve found that an analysis of the shift and the degree of change can be informative.

The Washington Post, Why did Kamala Harris withhold support for special investigations of police shootings?, Jan. 30, 2019