Supporters of a California ballot measure that would remove some of Proposition 13’s tax protections say claims shared thousands of times on Facebook and other social media platforms have distorted their initiative.

The campaign for the California Schools and Local Communities Funding Act of 2020, also known as the "split-roll" measure, is still gathering signatures to qualify for the November ballot. It is backed by a group of union and social justice organizations.

If approved by voters, the measure would hike taxes on factories, stores and other commercial and industrial real estate by requiring they pay property tax based on current market value rather than the value of the property when it was purchased. ​

It would raise an estimated $7.5 billion to $12 billion annually, according to an analysis by the nonpartisan Legislative Analyst’s Office. The money would be distributed to schools and local governments.

The proposed ballot measure, however, would not touch tax protections for homeowners.

Yet many claims on social media suggest the initiative would repeal all parts of Prop. 13, stoking concerns that residential property taxes could spike. 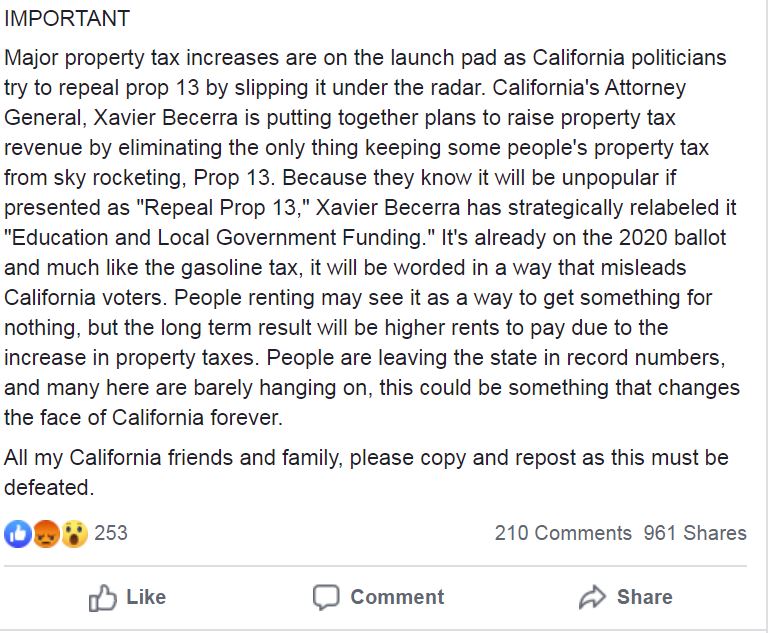 A similar Facebook post by Bakersfield Tuff, a media company focused on racing and rodeo, was shared more than 2,200 times. Others have appeared on the platforms Next Door and We Chat, according to the campaign for the initiative.

Do these claims distort the truth? We set out on a fact check to find out.

In 1978, voters approved Prop. 13, which slashed property taxes and limited how much they could go up. It also tied tax rates to a property’s purchase price, rather than to the fluctuations of California’s real estate market, ensuring homeowners greater financial stability.

The law remains popular among homeowners and business groups, who argue it allows neighborhoods to stay intact and older residents on fixed-incomes to remain in their homes rather than being forced out by high tax bills.

Groups such as Californians to Stop Higher Property Taxes have warned that removing Prop. 13’s commercial tax protections will lead companies to pass along any increased tax burden to consumers.

Critics of Prop. 13, on the other hand, say the law has cut too deeply into the foundation of tax revenue for local governments.

"They are completely false," said Alex Stack, spokesperson for the initiative. "It would completely protect and exempt all residential property, that means homeowners, renters and seniors."

That’s backed up by the initiative’s official title and summary prepared by the Attorney General’s office. That document says the measure exempts "residential properties; agricultural properties; and owners of commercial and industrial properties with combined value of $3 million or less." 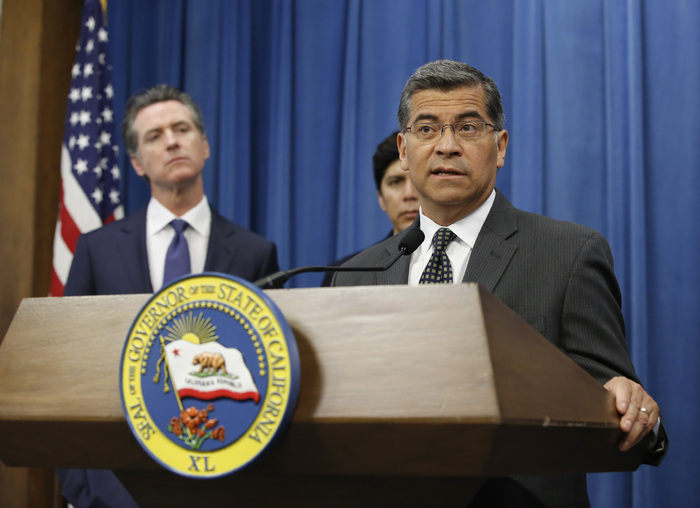 Kristi Noem
stated on July 16, 2021 in an Iowa event
“In South Dakota, I’m putting prayer back in our schools.”

The social media posts claimed Becerra "was putting together plans" to "eliminate" Prop. 13. There’s no evidence to substantiate that.

Becerra and others attorneys general, however, have been criticized for drafting misleading ballot measure titles and summaries. For example, Becerra was accused of giving an earlier version of this measure a friendly write-up. But attorneys general do not initiate ballot measures. A spokesperson for Becerra declined to directly address the social media posts.

Wesley Hussey, a political science professor at Sacramento State University, said the claim about Becerra planning to repeal Prop. 13 is clearly wrong and described the rest of the information as "cleverly fuzzy."

"It’s very intelligently written," he said of the posts, suggesting they may have originated with a political operative. "Only one or two spots are wrong. A lot is political opinion."

It would be "a dramatic revision" to Prop. 13. "If passed, it would be by far the biggest change we’ve seen" since voters approved the law, he said.

Keith Smith is a political science professor at the University of the Pacific in Stockton, where he studies elections and voting behavior.

He agreed the claim about Becerra was technically wrong. But given that the initiative represents a big change to Prop. 13, some voters may see it as "a gateway" to repealing the measure altogether.

Asked if social media posts were accurate, he replied: "It depends on your perspective. Is [Prop. 13] going away? No, it’s not going away. Is [the ballot measure] proposing to do away with some aspect of Prop. 13 that currently exists? Yes."

The claims published on Facebook and other sites, Smith explained, could be more convincing to voters than any details in the ballot measure.

Adding to the confusion about the proposed November ballot measure, there’s a voter initiative on California’s March primary ballot called Proposition 13, the School and College Facilities Bond. But it has nothing to do with the landmark measure of the same name passed four decades ago. A spokesman for the California Secretary of State’s Office said that the numbers assigned to propositions are reused through the years, sometimes leading to duplicates.

Social media posts claimed a November ballot measure would repeal California’s Prop. 13, and that Attorney General Becerra "is putting together plans" to eliminate the historic law.

The proposed measure would undo Prop. 13’s tax protections for commercial and industrial properties with a value over $3 million.

It would be a major change to the law.

But homeowners, small businesses and agricultural properties would not lose their Prop. 13 tax safeguards. That’s spelled out in the measure’s official state title and summary document.

While Becerra’s office writes the legal titles and summaries for voter initiatives, the attorney general does not put forward ballot measures. There’s no evidence Becerra is trying to eliminate Prop. 13.

In the end, the social media posts capture the real concern about potential changes to Prop. 13, but they also greatly misrepresent the specific changes the November ballot measure would make to it.

We rate their claims about repealing Prop. 13 as False.

Read more about Prop. 13, its history and efforts to change it in 'The Block That Prop. 13 Built,' a collaboration between CapRadio, CALmatters and public radio stations across California.

Also, we’re starting a new project called ‘Ask PolitiFact California.’ Is there something in California government or politics that we should fact-check next? Send us a question, and one of our reporters and fact-checkers might reach out to find the answer.

ABC 10 Sacramento, VERIFY: No, there will not be any ballot measures to repeal Prop 13 residential property tax cap in the upcoming election, Jan. 7, 2020