Election officials in California and across the nation are gearing up to expand mail-in voting this fall, they say to offer the public a safe way to vote amid the pandemic.

But as President Trump and some of his supporters continue to rail against the decades-old practice, more claims are popping up on social media either questioning vote-by-mail’s legitimacy or cheering on restrictions to it.

"If you haven’t already heard, the Supreme Court ruled today NO VOTING BY MAIL !!!" 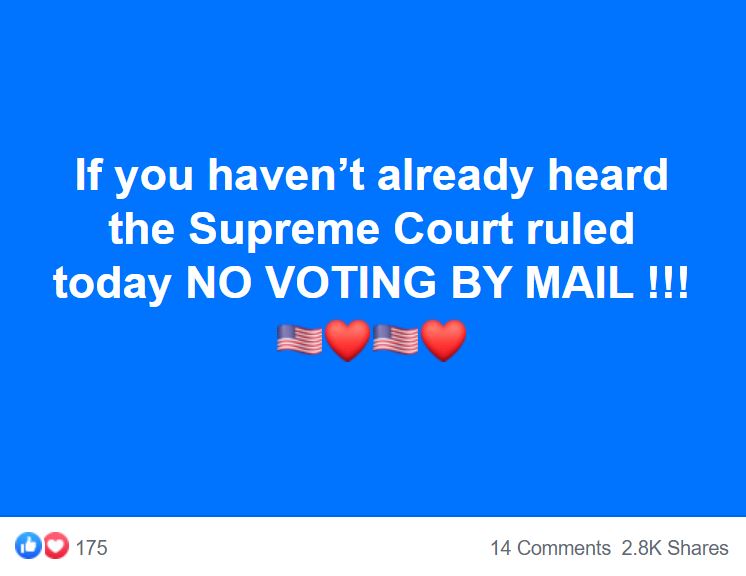 The post was flagged as part of Facebook’s efforts to combat false news and misinformation on its News Feed. (Read more about PolitiFact California’s partnership with Facebook). While this post was first shared weeks ago, it had been viewed 140,000 times over the past 24 hours, according to Facebook.

We decided to check it out.

California and many other states are getting ready for a surge of absentee voting, as vote-by-mail was previously called in the state.

In May, Gov. Gavin Newsom ordered all counties to send mail-in ballots to all active registered voters in the state. Newsom’s order was codified in June when he signed AB 860 passed by the Legislature.

There’s a patchwork of voting methods across the nation.

Just five states regularly conduct universal vote-by-mail elections: Colorado, Hawaii, Oregon, Utah and Washington. In those states, ballots are automatically sent to all registered voters, who then fill them out and mail them back or drop them off with election officials. Twelve states allow counties to opt-in to mail-voting or allow it for certain elections, but not others.

Voters in another 29 states have the option to vote-by-mail in federal elections, but must request such a ballot, according to an article by FiveThirtyEight.

In California, voters have used mail ballots since 1962 and they’ve become increasingly popular: The majority of ballots cast in each of the past four general elections and eight primaries were by mail, according to the Secretary of State’s Office website.

Did The Supreme Court Really Strike Down Voting By Mail?

The Facebook post gives the impression that the U.S. Supreme Court struck down the entire practice of vote-by-mail. But that is light years from what happened.

In reality, the high court on June 26, the same day the post appeared, denied an emergency motion by Texas Democrats to expand mail-in voting for that state only. Susan Hays, an attorney working on the case for Texas Democrats, said the case is still pending and the U.S. Supreme Court could rule on its merits later this year. Hays said a similar version of the case is also pending before the 5th U.S. Circuit Court of Appeals.

The June 26 ruling had no effect on vote-by-mail rules in other states across the nation, nor did it end the right in Texas.

Texas already allows vote-by-mail for those 65 and older, voters who are sick or have a physical condition that prevents them from traveling to the polls and others who are absent from their county, according to CNN.

The Facebook user who made the original post appears to be from Texas. It is possible he intended his post to mean that the Supreme Court had eliminated or curtailed vote-by-mail in that state alone, but he provided no context. And, again, the court’s ruling does not mean there’s "no voting by mail" in Texas or anywhere else.

About a week after the post was published, the Supreme Court issued a separate ruling on mail-in voting in Alabama. It temporarily blocked a lower court's decision that, citing the COVID-19 pandemic, would have made it easier for residents of three Alabama counties to vote by absentee ballot in July 14 primary runoff elections, according to an NPR news report.

But, again, that ruling came after the post was published, and has no bearing on existing rights to vote-by-mail in Alabama or other states.

That’s far from the truth. The high court rejected an expansion of mail-in voting in Texas in late June. It also voted down an effort to make the practice easier in three counties in Alabama in early July.

But those rulings in no way take away existing rights to vote-by-mail in dozens of states across the nation.

Update: This article has been updated to show the U.S. Supreme Court denied an emergency motion to expand mail-in voting in Texas. A decision on the merits of the case is still pending.

CapRadio's PolitiFact California will continue answering questions about vote-by-mail and similar topics through the November 2020 election. Email us your questions at [email protected], or contact us on Twitter or Facebook.

PolitiFact California, No, California Is Not Sending Mail-In Ballots "To Anyone In The State," As Trump Falsely Claimed, May 26, 2020