Facebook posts
stated on June 23, 2020 in a Facebook post:
In North Carolina, “you can be charged with a class H felony for wearing a mask and concealed carrying.”

A shopper wears a face mask in the produce section of a grocery store April 18, 2020, in the Harlem neighborhood of the Manhattan borough of New York, during the coronavirus outbreak. (AP)

In North Carolina, some residents are speculating about the ripple effects of Gov. Roy Cooper’s mandate that people wear masks in public.

One Facebook post, which was viewed hundreds of times, said the mandate will infringe upon North Carolinians’ Second Amendment rights.

"For those of you like myself that has your concealed carry permit and carry, you can be charged with a class H felony for wearing a mask and concealed carrying," it says, adding: "Once you have a felony(,) you can no longer carry."

No. A spokesman for Cooper, who is a Democrat, a spokesman for the Republican state Senate leader, and the leader of the state’s leading gun rights group all agree: North Carolinians are allowed to wear a mask and carry a concealed weapon. 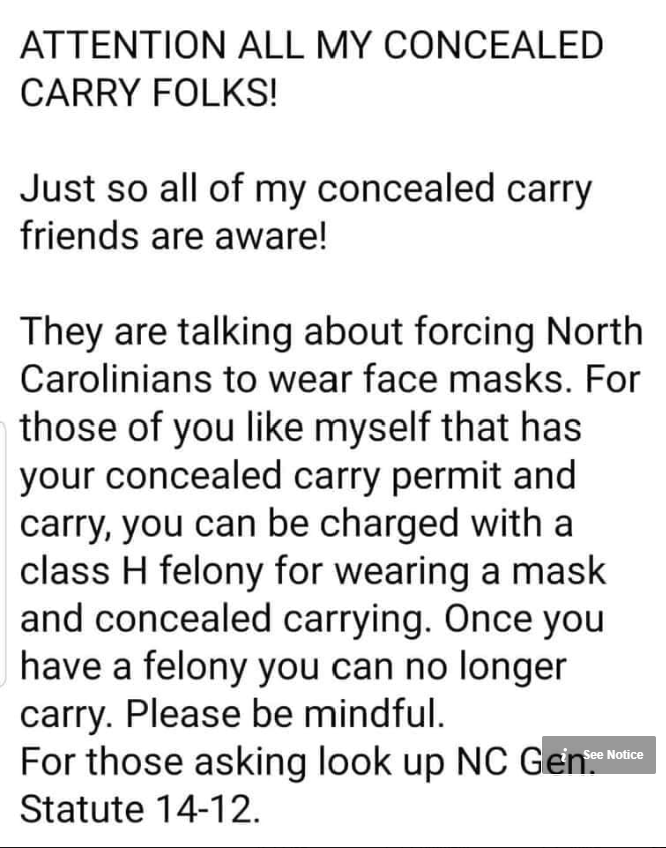 That statute, specifically 14-12.7, forbids adults from concealing their identities in public. But it doesn’t mention guns at all. And it passed decades ago to target the Ku Klux Klan, according to WRAL.

The mask law was suspended in May when state lawmakers passed their coronavirus relief package.

The law now says "any person wearing a mask for the purpose of ensuring the physical health or safety of the wearer or others" is exempt from state law prohibiting masks in public. It’s set to expire Aug. 1.

But even when it does expire, experts told us they don’t believe there will be a conflict between mask laws and concealed carry laws.

Pat Ryan, a spokesman for Senate leader Phil Berger, told PolitiFact that the anti-mask law applies "irrespective of whether a person is carrying a weapon or not."

"No statute exists that treats carrying a concealed weapon while masked differently than any other activity while masked," Ryan said.

Grass Roots North Carolina, one of the state’s leading advocates for Second Amendment rights, interprets the mask laws the same way. Paul Valone, president of Grass Roots NC, told PolitiFact in a phone interview that he’s aware of the rumors.

He says they’re inaccurate and could potentially discourage someone from carrying their concealed weapon and protecting themselves. Valone posted a letter from the group’s lawyer on its Facebook page.

"At your request, I have investigate(d) the rampant rumors that NC law makes it a felony to carry a firearm while wearing a mask – even if the individual holds a valid Concealed Handgun Permit," wrote Ed Green, the group’s Director of Legal Affairs. "There is no such law."

Green explained the mask and concealed carry laws this way:

Asked if it’s illegal to carry a concealed weapon while wearing a mask, Cooper spokesman Ford Porter said: "Having reviewed the concealed carry statute, our office does not believe this is the case."

A viral Facebook post says "you can be charged with a class H felony for wearing a mask and concealed carrying" in North Carolina.

The state’s top Democrat, top Republican and leading gun rights group agree: the claim is inaccurate and unfounded. We rate this claim False.

A letter by the legal counsel for Grass Roots North Carolina, an organization that advocates for Second Amendment rights.