Flawed claims that the seasonal flu has killed more people than COVID-19 have circulated around the internet for a while now.

But now a post on Facebook claims the opposite: that no Americans have died from the flu in 2020.

The May 16 post reads: "Not one American died from the Flu this year - 1st time in history BUT 80K died from COVID. Do you really believe the bull---- they’re shoving down your throat. I DON’T!!!" 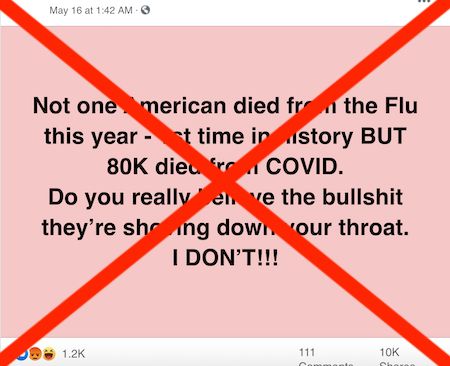 The Centers for Disease Control and Prevention tracks flu illnesses, medical visits, hospitalizations and deaths and provides estimated ranges of each category. Because the agency can’t track each case of influenza through its weekly surveillance data, it provides an estimated range to "reflect the larger burden," its website says.

Flu fatalities are based on death certificate data, which are collected and estimated each week by the National Center for Health Statistics within the CDC. According to the NCHS weekly tally of influenza deaths, about 8,000 Americans have died from influenza from January 2020 to May 16, 2020. This is not counting deaths caused by pneumonia, which is a common complication of the flu.

The CDC says that COVID-19, which has now killed nearly 100,000 Americans, is affecting the way people are seeking health care, so data should be interpreted with caution.

While the CDC’s figures are estimates and considered preliminary, the claim that no Americans have died from the flu in 2020 is Pants on Fire!