Instagram posts
stated on September 14, 2020 in an Instagram post:
The same deputy who got shot through her jaw in Saturday’s shooting is the same officer seen on video laughing and smirking at the scene of security guard Andres Guardado’s death after he was shot and killed by LASD officers on June 18th, 2020.”

On Sept. 12, a gunman walked up to a parked police car in Compton, Calif., opened fire on two Los Angeles sheriff’s deputies, a man and a woman. The shooter ran away, and the deputies were taken to the hospital to treat their injuries.

The department has not released the deputies’ names. But users on social media went ahead anyway and connected one of the deputies to another deputy-involved shooting in June, without evidence.

On June 18, LA sheriff’s deputy Miguel Vega shot and killed 18-year-old Andrew Guardado after a confrontation at an auto repair business. Deputies and Guardado’s family dispute the details of the shooting and a criminal investigation is underway.

The posts on Instagram compare two screenshots: On the left, they say, are photos of a female deputy who some described as smirking at the scene of Guardado’s shooting. On the right is a grainy still from surveillance video of the female deputy who was shot in the patrol vehicle. 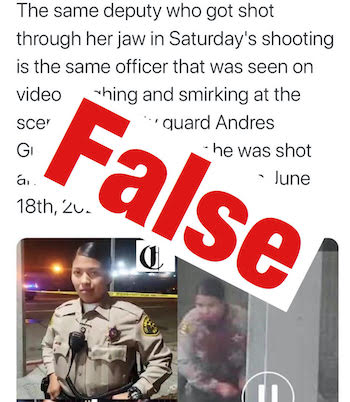 Text above the images reads: "The same deputy who got shot through her jaw in Saturday’s shooting is the same officer that was seen on video laughing and smirking at the scene of security guard Andres Guardado’s death after he was shot and killed by LASD officers on June 18th, 2020."

There is no evidence the images show the same woman, and the Los Angeles Sheriff’s Department told PolitiFact that the ambushed female deputy was not at the scene following Guardado’s death in June.

"She for sure was not there," a spokesperson for the sheriff’s department told PolitiFact. "It was not her."

Some media reports have identified the ambushed deputy as a 31-year-old former librarian aide who graduated from LA’s deputy academy in July 2019. (We are choosing not to repeat her name since we have not confirmed it.) This timeline squares with the reported timeline of service for the deputies who were shot.

The Daily Mail spoke with the deputy’s father and published photos from her graduation ceremony. They show she is not the same woman who appears in the Instagram screenshot at the scene of the Guardado shooting.

CNN, Los Angeles officials say it is a miracle deputies who were shot in Compton survived, Sept. 15, 2020

Daily Mail, EXCLUSIVE: Hero LA deputy mom, 31, who saved her partner's life after they were both ambushed in Compton by gunman is a former librarian who only graduated from the Police Academy last year, Sept. 15, 2020