Viral image
stated on August 18, 2021 in in a photo in a reddit thread:
A photo shows two COVID-19 patients lying on the floor awaiting treatment in Florida.

A viral post on Reddit shows a dramatic photo of two people lying on the ground sick with COVID-19 seeking treatment. One appears curled against a wall, while another patient draped with a paper medical gown is curled up, face down.

"Everyone please be careful — whether you are vaccinated or not," wrote Suzanne Lopez on Reddit where she posted the photo taken by her husband Louie. "My husband (vaccinated, but positive) has been waiting 2+ hours for monoclonal therapy and he says he has never seen people so sick. Moaning, crying, unable to move."

The Reddit thread drew hundreds of comments about the spread of COVID-19 in Florida, which has experienced a spike in cases this summer.

"I hate to see it, and I hate to say it, but we need more pictures like this showing the reality of the situation," wrote one Reddit user.

The idea that, more than one year into the pandemic, COVID-19 patients in a major city in Florida would be lying on a floor moaning for help seemed improbable. But it’s real, according to city and state officials. 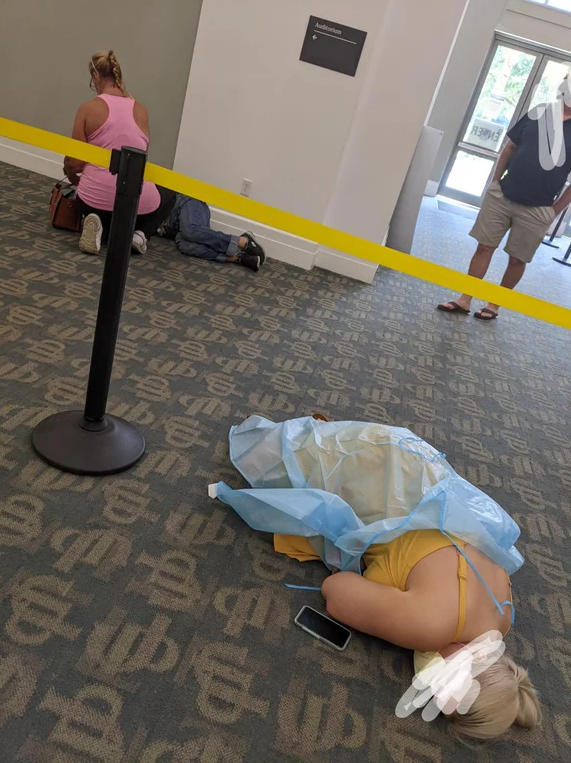 The photo was taken at one of multiple state-supported sites that opened in August to provide monoclonal antibody treatments that help COVID-19 patients avoid hospitalization or death.

Nikki Kimbleton, a spokesperson for the city of Jacksonville, said in a written statement to PolitiFact that the volume of patients seeking the treatment more than doubled in recent days at the Jacksonville clinic, which is located at a public library. While the site provided 43 doses on Aug. 16, that rose in the following days to 97, 143 and 155.

Once the city realized the increase in patients seeking treatment, the city made sure the clinic had adequate supplies, including more wheelchairs, seats for patients waiting in line and signs directing patients to alert someone if they need assistance.

Louie Lopez, who took the photo, told PolitiFact that he was vaccinated in the spring. But about a week ago he came down with symptoms of nasal congestion and a headache and then tested positive for COVID-19. Lopez said his physician advised him to take Regeneron, so he signed up for an appointment.

Lopez told PolitiFact he saw only a couple of chairs at the appointment site. He said that while he was waiting in line for his appointment, other people arrived including the two women in the photo.

America First Political Committee
stated on January 10, 2022 in an ad
Carlos Gimenez “wants a national database to track you and discriminate against you.”

He said the woman in the yellow dress "was in the worst shape — she was moaning and in pain, and it was freezing in there. They brought one of those paper gowns and covered her up. She was just laying there," Lopez said. Lopez said he didn’t time the events precisely, but estimated the women were on the floor for about an hour. Later, clinic staff put the two women into wheelchairs.

City and state officials sent us a TV news report by News4Jax, which included an interview with Toma Dean, the woman lying face down on the floor.

Dean, of Fleming Island, told News4Jax, that she was not vaccinated, and said that she had been suffering with COVID-19 and pneumonia for two weeks. An emergency room doctor had advised her to get the monoclonal antibody treatment.

Dean described herself as in "very bad shape, light-headed, dizzy, shortness of breath. I couldn’t stand at all." She told News4Jax that the staff at the library were excellent and scrambled to get wheelchairs. Dean’s voice in the TV interview showed she was still sick, but she said she felt better after the treatment. (PolitiFact was unable to reach Dean directly.)

"This is real, guys," Dean told News4Jax. "If you have it, I advise you to go get this therapy. Go take advantage of the resources out there. Get vaccinated. It may not be the first thing that you want to do, but it's better than the end result."

DeSantis has set up sites for Regeneron across Florida

In November, the U.S. Food and Drug Administration issued an emergency use authorization to Tarrytown, N.Y.-based Regeneron Pharmaceuticals Inc. for Regeneron to treat mild to moderate COVID-19. The product consists of two monoclonal antibodies, which are laboratory-made proteins that mimic the immune system’s ability to fight off harmful pathogens such as viruses.

On Aug. 10, 2021, the FDA revised the authorization, allowing for emergency use of Regeneron as a preventive drug for people who are exposed to the virus and are at high risk of developing severe COVID-19. The agency said the treatment is not a substitute for vaccination.

Florida Gov. Ron DeSantis has urged people to take the drug, which was used by former President Donald Trump after he became infected. Both vaccines and Regeneron are free for Floridians.

The state of Florida has ordered more than 7,000 doses in total from the federal government, said Weesam Khoury, a state health department spokesperson.

A photo shows two COVID-19 patients lying on the floor seeking treatment in Florida. City and state officials confirmed that the photo was taken at a state-supported site in Jacksonville where Floridians can get a free Regeneron treatment.

The photo was taken by another patient as he waited in line for his appointment during a week that saw a rapid increase in patients showing up to receive treatment. More chairs and wheelchairs and signs have since been added at the site.

This image is real. We rate this statement True.