After a mob of President Donald Trump’s supporters stormed and occupied the U.S. Capitol on Jan. 6, an Instagram post suggested that President-elect Joe Biden, who condemned that attack, remained silent when demonstrations turned violent in the late spring and summer of 2020.

The post was an apparent reference to the numerous Black Lives Matters protests held around the country, following the May 25 death of George Floyd, a 46-year-old Black man who died after a Minneapolis police officer pinned Floyd’s neck under his knee. Some of the demonstrations turned violent.

The post showed four images. Three depicted fire and violence in the streets — one labeled June, one July and one August; superimposed over each was a photo of Biden, with his eyes closed. A fourth image showed a tightly packed crowd and a superimposed photo of Biden, looking forward, with a quote: "This violence is a threat and must end now."

"He was asleep the whole time," reads the accompanying caption. The post was flagged as part of Facebook’s efforts to combat false news and misinformation on its News Feed. (Read more about our partnership with Facebook.)

During the attack on the Capitol, Biden called on Trump to go on national television "and demand an end to this siege." "This is not dissent, it’s disorder, it’s chaos." Biden said. "It borders on sedition, and it must end. Now." 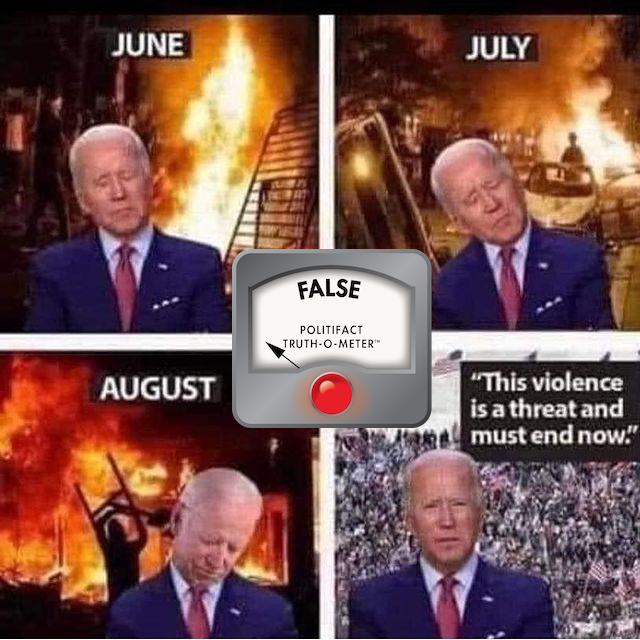 But Biden also spoke out a number of times when violence broke out during some Black Lives Matter protests.

On May 30, Biden said in a statement about Floyd: "Protesting such brutality is right and necessary. It’s an utterly American response. But burning down communities and needless destruction is not. Violence that endangers lives is not. Violence that guts and shutters businesses that serve the community is not."

On July 28, he said: "I’ve said from the outset of the recent protests that there is no place for violence or the destruction of property. Peaceful protesters should be protected — but arsonists and anarchists should be prosecuted — and local law enforcement can do that."

After protests in downtown Portland, Ore., for every night for nearly three months following Floyd’s killing, Biden said Aug. 30 in a statement while campaigning: "I condemn violence of every kind by anyone, whether on the left or the right. And I challenge Donald Trump to do the same."

On Aug. 26, in the wake of violence in Kenosha, Wis., following the police shooting of Jacob Blake, Biden said in a video: "Burning down communities is not protest, it’s needless violence — violence that endangers lives, violence that guts businesses, and shutters businesses that serve the community. That’s wrong."

An Instagram post six days after the attack on the U.S. Capitol  suggested that Biden, who condemned the attack, had stayed silent about violence at Black Lives Matter protests during June through August of 2020.

Biden made several statements during that period denouncing the violence.

Kathy Barnette
stated on May 13, 2022 an interview:
Says she never tweeted comments linking pedophilia and Islam.

Aaron Lieberman
stated on April 28, 2022 an ad:
"Kari Lake has been appearing at rallies with neo-Nazis," while "two federal juries have found" Katie Hobbs "guilty of racial discrimination."

Pennsylvania Conservative Fund
stated on April 21, 2022 an ad:
Mehmet Oz “was a spokesman for a group who wanted to defund the police.”

Dave McCormick
stated on April 4, 2022 an ad:
Mehmet Oz "called for a New Zealand-style gun ban" and said "Americans should have less access to guns."

Evan McMullin
stated on April 1, 2022 an ad:
“Mike Lee advised Trump's legal challenges to overturn our election” and “was one of only two senators who was in on the scheme.”

David Perdue
stated on March 29, 2022 an ad:
“A secret backroom deal" gave "away hundreds of millions of tax dollars to a Soros-owned company."