The death of George Floyd: What you need to know

A protester sprays graffiti on a wall near the Minneapolis 3rd Police Precinct on May 28, 2020, in Minneapolis. (AP/Minchillo)

Protests have flared up in Minneapolis and across the country as demonstrators decry the May 25 death of George Floyd. Floyd, a 46-year-old black man, died in police custody after a white officer pinned Floyd’s neck under his knee while Floyd pleaded that he couldn’t breathe.

Protesters, fed up with the latest in a long series of fatal encounters between black men and white law enforcement officers, have stormed the streets, looted city stores and set fire to a Minneapolis police department building.

"The chapter that’s been written this week is one of our darkest chapters," said Minnesota Gov. Tim Walz, who deployed the Minnesota National Guard, in a May 29 press conference.

Hennepin County Attorney Mike Freeman announced May 29 that Derek Chauvin, the officer who pinned Floyd, has been charged with third-degree murder and manslaughter.

Freeman said the county has never filed charges so quickly. Between witness statements, a medical examiner’s preliminary report, bodycam footage and bystander videos that spread widely on social media, he said his office had everything they needed.

Chauvin is now in custody, Freeman said. Ongoing investigations could bring further charges against him and the other three officers involved with Floyd’s death, who have all been fired.

The FBI and Justice Department are conducting a federal civil rights investigation as a "top priority," and the Minnesota Bureau of Criminal Apprehension is investigating the incident.

In short, a lot has happened since Floyd’s death. Here’s what we know about the story so far.

A 911 call, a violent arrest and a viral video

Around 8 p.m. on May 25, a staffer at Cup Foods, a local convenience store, called 911. He told the operator that Floyd had paid for cigarettes using "fake bills" and that he was outside the store, "sitting on his car" and appearing "awfully drunk," according to a transcript of the call.

The owner of Cup Foods later told CNN the issue was over a counterfeit $20 bill.

The Minneapolis Police Department said in a statement that officers responded "on a report of forgery in progress" and, finding Floyd in his car, ordered him to exit the vehicle.

The statement said Floyd "physically resisted officers," who handcuffed him and called for an ambulance because "he appeared to be suffering medical distress."

Video recorded by a bystander at the scene shows Chauvin restraining Floyd behind a parked police cruiser and pinning Floyd’s neck to the pavement with his knee. Three more officers can be seen at various points, with one keeping onlookers off the street.

The 10-minute video is disturbing, but can be watched here.

Floyd can be heard repeatedly telling the officers, "I can’t breathe." After a few minutes, Floyd becomes silent, closes his eyes and stops moving, but Chauvin keeps his knee in place.

Bystanders can be heard begging the officers to let him breathe, with one person telling the officers his nose is bleeding and another demanding that they check his pulse.

"He’s not resisting arrest or nothing," one bystander says.

The Minneapolis Fire Department’s report said Floyd was unresponsive and pulseless in the ambulance, adding that witnesses on the scene said the police "killed the man."

He was pronounced dead at the Hennepin County Medical Center at 9:25 p.m, according to the medical examiner.

As protests mounted, so did the evidence that Floyd had not resisted arrest, as the police report said. 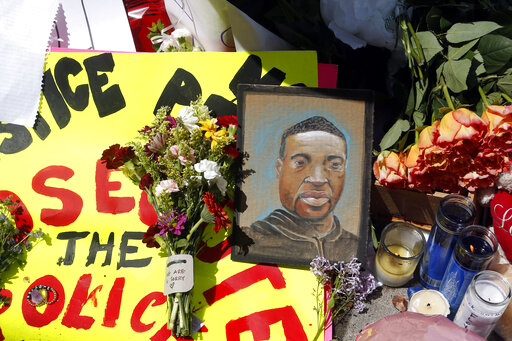 A portrait of George Floyd is seen on May 27, 2020, as part of the memorial for him near the site of his arrest in Minneapolis. (AP/Mone)

Other publicly available videos — including one video captured by a bystander from their car and another pulled from the surveillance tape of a nearby Dragon Wok restaurant — show Floyd stepping out of his car with no apparent resistance.

According to the Minneapolis Police Department’s policy and procedure manual, neck restraints that are meant to control are allowed only against "a subject who is actively resisting."

Neck restraints that are designed to knock someone unconscious are reserved as last-ditch measures for dealing with aggressive resistance, per the manual.

Floyd’s family has called for murder charges to be filed against the officers, as has Minneapolis Mayor Jacob Frey, who said May 27 that he "saw nothing that would signal that this kind of force was necessary" and that the knee-to-neck technique "should not be used, period."

In a statement after Freeman announced charges against Chauvin, Frey said the move was "an essential first step on a longer road toward justice and healing our city."

A history of similar incidents

Floyd grew up in Houston. He played sports in high school and later at a community college in Florida, according to the New York Times. He moved to Minneapolis four or five years ago.

He worked as a bouncer at a restaurant owned by Jovanni Thurnstrom, who was also his landlord, before it closed on-site dining due to the coronavirus.

"Everyone here loves him," Thurnstrom told a local ABC affiliate, adding that Floyd was "a very calm, nice guy" who wanted to learn to Bachata dance and once drove an intoxicated diner home from the restaurant.

Some people drew comparisons to the 2014 death of Eric Garner, who died in New York after an officer put him in a chokehold. Others remembered Philando Castile, who was shot to death in 2016 during a traffic stop in Minnesota.

Both incidents touched off similar protests. So have more recent events, such as the fatal shooting in Georgia of Ahmaud Arbery by a white former police officer and his son. 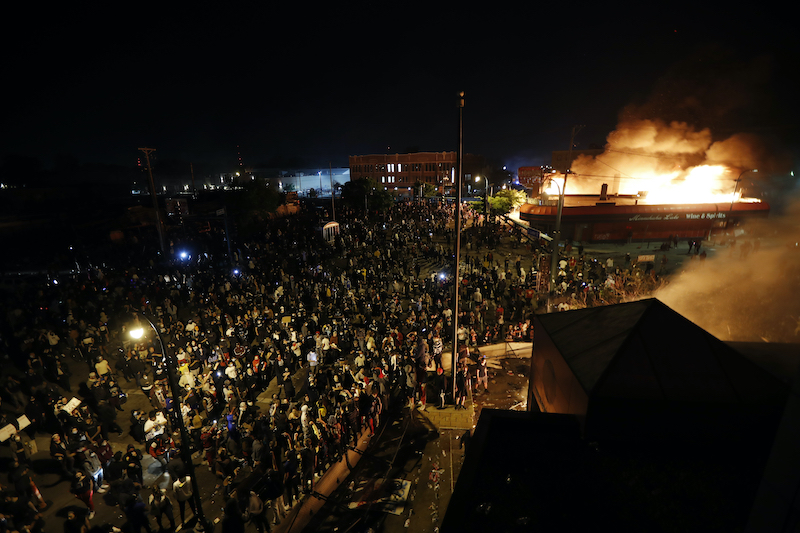 Protesters demonstrate outside of a burning Minneapolis 3rd Police Precinct on May 28, 2020, in Minneapolis. (AP/Minchillo)

Myron Orfield, professor of civil rights and civil liberties law at the University of Minnesota Law School, said race-related riots have swept the country before. They came in the 1960s, during both World Wars and in other times, always hitting segregated cities particularly hard.

"It happens when social conditions become unlivable, and then usually the police conduct is like a match," Orfield said.

Minneapolis is particularly segregated, Orfield said, citing a report he authored on the city’s racial disparities. It doesn’t help that the U.S. is battling a pandemic.

"When the white community gets a cold, the black community gets pneumonia," he said. Against that backdrop, an episode of police brutality is bound to "light a fuse."

In his career, Chauvin had 18 complaints and two letters of reprimand filed against him, according to a summary released by the Minneapolis Police Department. Tou Thao, another officer involved, had six complaints, one of which was still open.

Chauvin shot suspects in other incidents, the Associated Press reported. Thao was sued in federal court in 2017 for allegedly using excessive force.

"The Minneapolis Police Department, in my experience, has always had a number of really brutal, racist police officers," Orfield said. "It’s been a part of the culture of that department for quite a while. Most of the police officers are good, but there’s a bad element."

CNN, "The Minneapolis police officer who knelt on George Floyd's neck had 18 previous complaints against him, police department says," May 29, 2020

CNN, "The move used to restrain George Floyd is discouraged by most police. Here's why," May 29, 2020

The New York Times, "What We Know About the Death of George Floyd in Minneapolis," May 28, 2020

City of Minneapolis, "Mayoral Declaration of Local Emergency," May 28, 2020

CNN, "Store owner explains why police were called on George Floyd," May 28, 2020

CNN, "Prosecutors do not announce charges in George Floyd's death but say 'justice will be served,'" May 28, 2020

CBS This Morning, "George Floyd​'s family calls for Minneapolis police officers to be charged: 'This was clearly murder,'" May 27, 2020

University of Minnesota Law School, "Why Are the Twin Cities So Segregated?" February 2015

Phone interview with Myron Orfield, professor of civil rights and civil liberties law and director of the Institute on Metropolitan Opportunity at the University of Minnesota Law School, May 29, 2020

Email interview with Casper Hill, media relations coordinator for the City of Minneapolis, May 29, 2020