Facebook posts
stated on April 25, 2021 in a Facebook post:
Caitlyn Jenner “literally killed someone 6 years ago in the streets and was released by a District Attorney.”

On the night of this year's Academy Awards, Olympic gold medalist and former reality TV show star Caitlyn Jenner got into a social media tussle with Democratic Congress member Ted Lieu of California.

The argument started on Twitter: As a way to win support for her candidacy in the likely recall election against Gov. Gavin Newsom, Jenner criticised the governor for allowing district attorneys to release "dangerous criminals back on to our streets."

The Twitter war stole some of the spotlight from the Oscars and went viral. Alex Mohajer, a political commentator, retweeted Jenner’s criticism with the comment, "This is your reminder that Caitlyn Jenner literally killed someone in the streets 6 years ago and was released by a District Attorney." 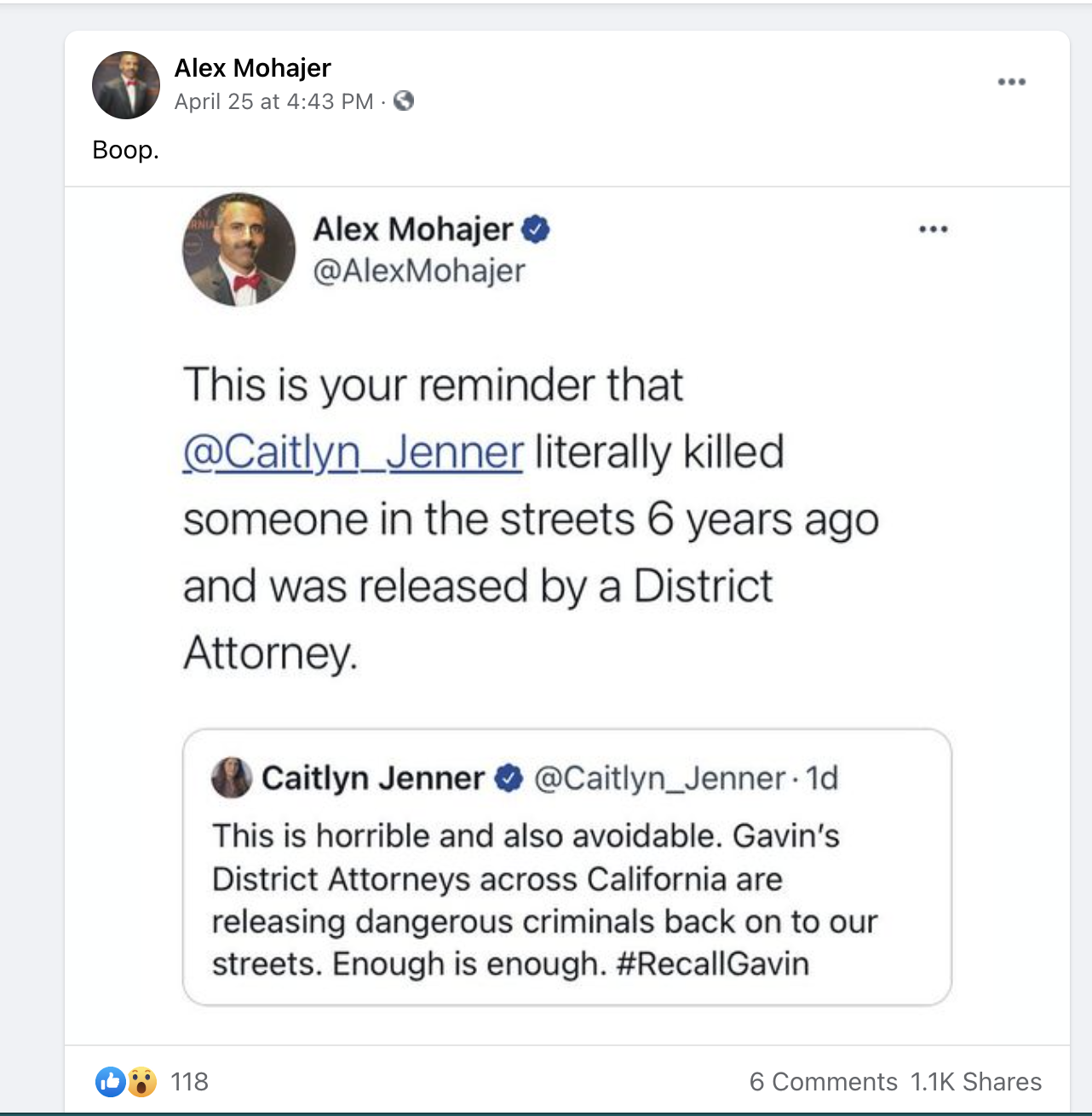 Mohajer also posted the claim to their Facebook, where it was shared more than a thousand times.

Facebook flagged the post as part of its efforts to combat false news and misinformation on its News Feed. (Read more about PolitiFact California’s partnership with Facebook and a previous PolitiFact fact-check of Caitlyn Jenner from 2017.) Facebook also flagged a similar post just days before. 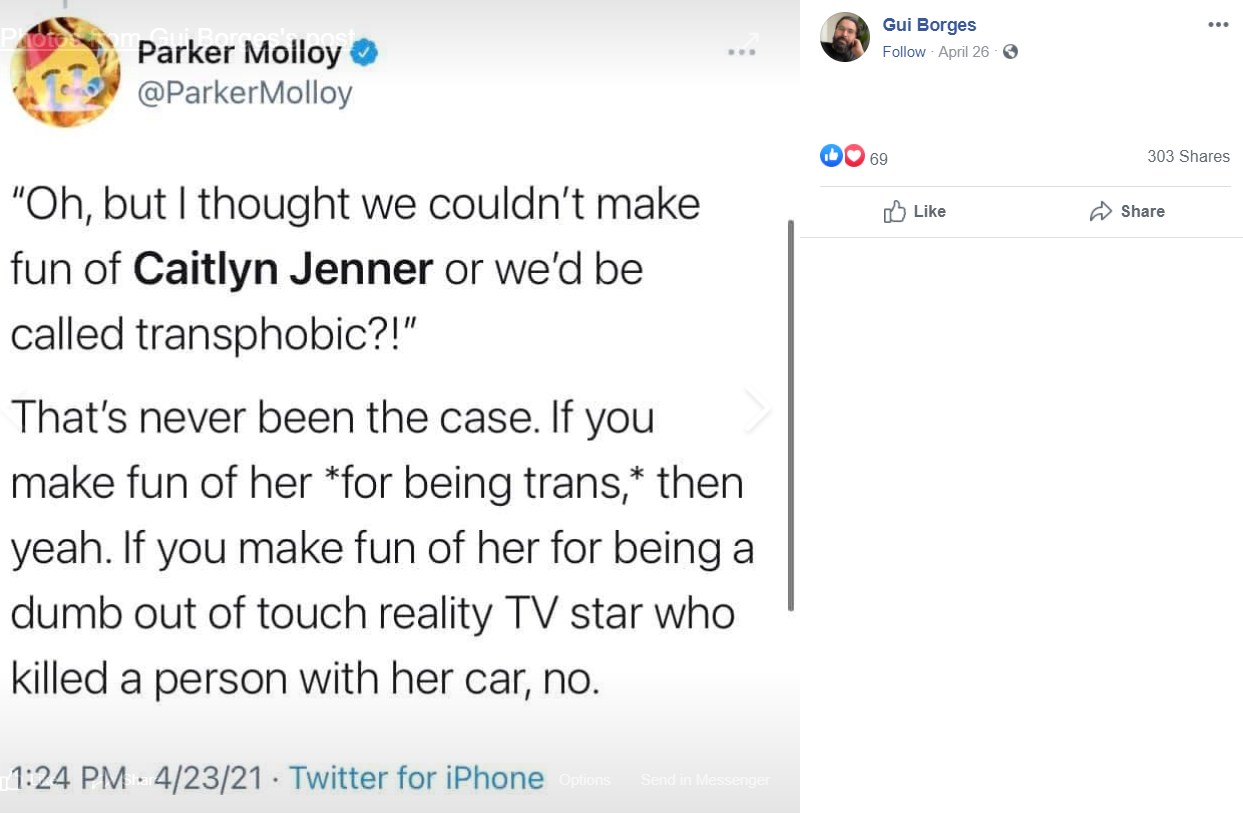 We decided to look into it.

In 2015, Jenner was driving an SUV, which was towing an ATV, on the Pacific Coast Highway in Malibu. She rear-ended a Lexus, pushing it into oncoming traffic. Kim Howe, the driver of the Lexus, was then hit by a Hummer traveling in the opposite direction. Jenner proceeded forward and hit another vehicle, a Prius, whose driver suffered mild injuries. But Howe was killed on impact.

Jenner was apologetic for the event and called it a terrible accident. She settled with Howe’s family and Jessica Steindorff, the driver of the Prius, for an undisclosed amount, as well as the family in the Hummer for $800,000.

The Los Angeles County District Attorney’s Office issued an investigation into the accident and looked into the possibility of vehicular manslaughter. The investigation triggered controversy for Jenner at the time, because the misdemeanor charges would have potentially put her behind bars for at least a year, at which point she had just announced her gender transition.

At the end of the investigation, the DA’s office did not proceed with charges due to a lack of evidence. In order to prove vehicular manslaughter, a person must have some level of ordinary negligence. In Jenner’s case, they came up empty. The Los Angeles County Sheriff’s Department recommended that she be charged, however it wasn’t their final decision.

In addition to a lack of evidence, the DA's report said Jenner let go of the gas pedal and engaged her brakes a couple of seconds too late before hitting Howe. The report says she did not break any traffic laws, except for driving below the speed limit. Therefore, they declined to charge her with vehicular manslaughter.

Experts say charging someone for the crime isn’t easy. The burden of proof is entirely on the prosecution. California law says the prosecution must prove that the person who caused the death was driving with negligence and violating traffic laws.

"The negligence goes sort of hand-in-hand with the traffic offense," said John McCurley, criminal defense attorney and appellate law specialist. Anything that can impair your driving safely — like texting, putting on makeup, or staring out the window — is considered ordinary negligence.

McCurley said these cases usually only involve single riders. "The only person who really has the story is them and they don’t have to testify," McCurley said. "I think that’s a big issue with proving these cases."

And if the prosecutor can’t come up with evidence, then they can’t press charges. "I can't say that it was her fault. So again, we have an absence of facts," McCurley said.

When prosecutors do an investigation, they leave no shortage of expertise. "They don’t skimp on resources," said Nabiel Ahmed, a criminal defense attorney in the Oakland Bay Area.

Ahmed represented a vehicular manslaughter case in which his client was intoxicated and driving over the speed limit. The driver did not engage their brakes and as a result smashed into a parked car. They were convicted.

"Caitlyn’s case differed [from] mine in that she did apply the brakes and she was driving below the speed limit, so these were two critical distinguishing factors," Ahmed said. The investigation also found Jenner was sober at the time of the accident.

Did California recall election candidate Caitlyn Jenner kill someone in the streets and get released by a district attorney?

It’s correct that the district attorney did not pursue charges against Jenner. The decision came about after an investigation, in which the DA’s office said there was a lack of evidence to charge her with vehicular manslaughter and of driving recklessly. The DA did not release Jenner.

The posts on social media suggest that Jenner was released by a district attorney for killing someone. However, Jenner was never charged or convicted in the case.