Viral image
stated on October 23, 2021 in a Facebook post:
Photos show Manila Bay before and during Rodrigo Duterte’s administration.

A recent Facebook post seeks to credit Rodrigo Duterte, president of the Philippines, with cleaning up a mess.

"Manila Bay before and currently with Pres. Duterete’s administration," the post sharing two images says. "Look at the difference."

The first image shows a beach packed with debris. The second shows people walking on the clean sand.

But both photos were taken during Duterte’s time as president. 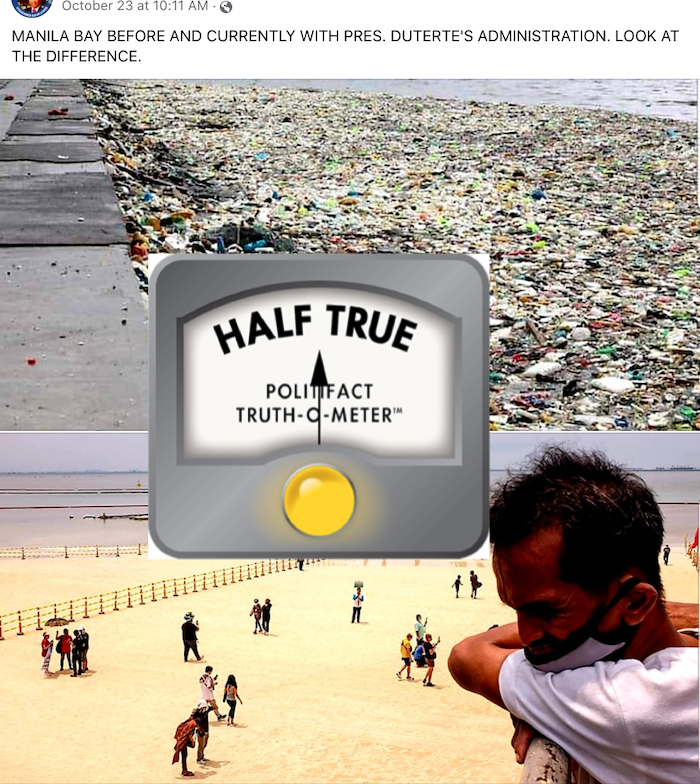 (Screengrab from Facebook)
This post was flagged as part of Facebook’s efforts to combat false news and misinformation on its News Feed. (Read more about our partnership with Facebook.)
The first photo was posted on the Philippine News Agency’s website on July 16, 2018, two years after Duterte was sworn in as president.
The caption says: "Manila Bay trash. Tons of garbage washes ashore Manila Bay along Roxas Boulevard due to the southwest monsoon or habagat on Sunday (July 15, 2018). Garbage is still a major problem in the Manila Bay even as government personnel haul truckloads of trash during cleanup."
The second photo, published in October 2020 on the website of ABS-CBN News, another news organization in the Philippines, shows the results of the government’s efforts to clean up Manila Bay by dumping dolomite sand along the shoreline. Environmental groups criticized the beautification project, saying it could actually harm the bay by introducing more heavy metals in its waters.
Without that context, people could look at this Facebook post and reasonably think that the first photo predates Duterte’s administration. It doesn’t. We rate it Half True.

Viral image
stated on December 29, 2021 a Facebook post:
Says Virgil Abloh was a defendant in Ghislaine Maxwell’s criminal case when he died a day before the trial started.

Viral image
stated on November 28, 2021 a Facebook post:
“Only Reuters” reported that the doctor who detected the omicron variant said its symptoms are “very mild.”

Facebook posts
stated on November 26, 2021 a Facebook post:
We know in November 2021 that “none of your previous vaccines will protect you now from the emerging variant omicron.”

Viral image
stated on November 27, 2021 a Facebook post:
The omicron variant’s name is evidence the coronavirus pandemic is a hoax.

Viral image
stated on November 28, 2021 a Facebook post:
“Celine Dion has been paralyzed by the COVID vaccine and cancels her tour.”