For many Americans, Jan. 6, 2021, is seared in memory as the day a crowd of President Donald Trump supporters stormed the U.S. Capitol.

But an image circulating on Facebook invokes what it claims is a different memory from that day:

"Never forget January 6th" read the words across an image of a Citgo gas station sign advertising regular gas at $1.99 a gallon. "Oh yeah, Jan. 6, 2021," the caption in the June 17 Facebook post said. "When Americans could still afford to get to work." 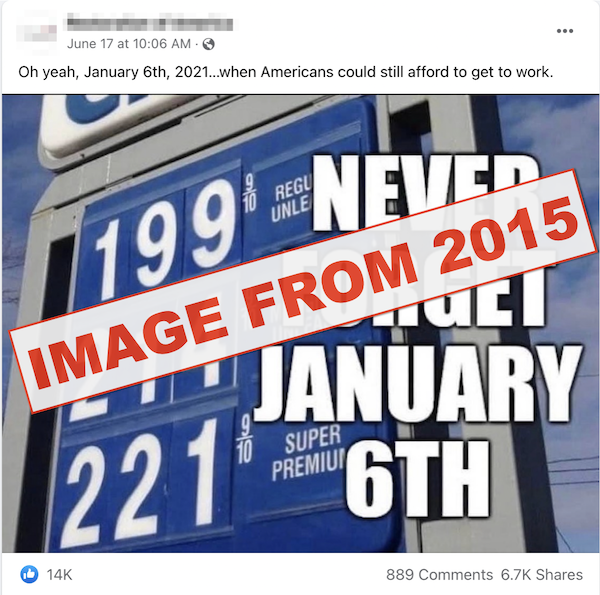 (Screenshot from Facebook)
But the image doesn’t actually show gasoline prices on Jan. 6, 2021. This photo was originally taken six years prior on Jan. 22, 2015, according to its caption on the Flickr photo sharing service. Federal data show the average national gas price was around $2.04 a gallon at that time.
The Facebook post was flagged as part of Facebook’s efforts to combat false news and misinformation on its News Feed. (Read more about our partnership with Facebook.)
Gas prices on Jan. 6, 2021, were averaging $2.25 to $2.32 per gallon, according to the U.S. Energy Information Administration.
Several factors have contributed to recent rising gas prices, including the increasing cost of oil, sanctions on Russian energy, and COVID-19 pandemic-related changes in supply and demand.
This misleading image spread online as news organizations broadcast hearings from the House select committee’s investigation into the Jan. 6 Capitol attack. Prices reached a national average of $5 a gallon on June 13, the last day federal data was reported before this post was made — and the day the House committee held its second public hearing.
We rate the claim that this image shows gas prices on Jan. 6, 2021, False.