A protester throws a Molotov cocktail during clashes with police in central Kyiv, Ukraine, on Jan. 22, 2014. (AP)

Social media users continue to share videos and images of Russia’s invasion into Ukraine for audiences around the world.

But not all of the photos show the current invasion.

Reports show that some Ukrainians have been making Molotov cocktails to use against the Russian forces threatening major cities. On Feb. 25, the Ukrainian Defense Ministry instructed residents in Kyiv to make Molotov cocktails, which are improvised incendiary devices often made with glass bottles, flammable liquid and some type of cloth fuse that can be set on fire.

Using reverse image searches on Google, Bing and Yandex, PolitiFact found that each of the Facebook photos were taken during protests in Kyiv in January 2014. 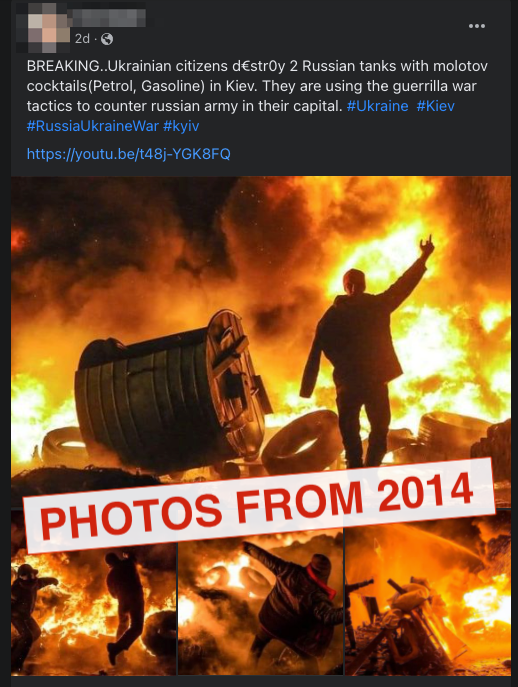 At the time, there were mass protests in Ukraine, fueled by opposition to then-President Viktor Yanukovych’s decision to turn away from a free trade agreement with Europe and instead pursue closer cooperation with Russia.

In late January 2014, the once-peaceful protests against Yanukovych’s government erupted into fiery battles in the streets, as "thousands of demonstrators hurled rocks and firebombs to set police vehicles ablaze," according to the Associated Press.

The photo of a man pointing at the sky against a backdrop of flames and smoke was taken on Jan. 22, 2014, according to the European Pressphoto Agency.

"A protester gesticulates during clashes with riot police at an anti-government protest in downtown Kiev, Ukraine," the caption said.

A reverse image search for two people who appeared to be throwing something into the flames traced the photo back to an Irish Times article from 2014.

From there, we found the original photo on Getty Images.

"Ukrainian anti-government protesters throw Molotov cocktails during clashes with riot police in central Kiev early on Jan. 25, 2014," said the corresponding caption. "Protesters and Ukrainian police were locked in a tense standoff in Kiev after a night of sporadic clashes that erupted despite a truce and offer of concessions by President Viktor Yanukovych."

The third photo featured in the post, which features a person throwing something in the direction of burning tires, also traced back to Getty Images.

"An anti-government protester throws a Molotov cocktail during clashes with police on Hrushevskoho Street near Dynamo stadium on Jan. 25, 2014 in Kiev, Ukraine," read the caption. "After two months of primarily peaceful anti-government protests in the city center, new laws meant to end the protest movement have sparked violent clashes in recent days."

The final photo of a person preparing to fire a slingshot first appeared in Russian journalist Ilya Varlamov’s LiveJournal blog post, in which he wrote about his experience during the 2014 protests. Varlamov did not share specific details about the photo, but he noted that the photos shared were all taken in Kyiv on Jan. 22 or 23, 2014.

Facebook users have also shared videos of the 2014 unrest and falsely claimed they show Ukrainians destroying a Russian tank during the current conflict.

The photos actually date back to 2014 anti-government protests in Ukraine.

Claims that the photos depict the current fighting are False.

RELATED: Photo of children sending off Ukrainian troops is from 2016, not 2022

RELATED: Photos of Ukrainians praying "in this phase of war danger" are actually from years ago

Getty Images, "Protests Continue In Kiev As The Opposition Calls For A Snap Election," Jan. 25, 2014

The Washington Post, "Ukrainians Google ‘how to make a molotov cocktail’ after defense minister’s call to arms," Feb. 25, 2022