A viral image of two young children watching Ukrainian troops drive by on tanks has ricocheted across the internet as the country’s forces work to resist an invasion from Russia.

The children are holding hands as the tanks roll by. One, wearing a pink jacket, is seen holding a stuffed animal. The other, a toy gun slung across his shoulder, is saluting the soldiers.

The photo is a real image and no doubt elicits real emotions.

But it also does not depict the conflict currently playing out in Ukraine. It’s been miscaptioned online. Reverse image searches show that the original image dates back to 2016.

Posts sharing the photo as though it were current have spread across Twitter, Facebook, Reddit and image sharing services like Imgur. One post came from U.S. Rep. Adam Kinzinger, R-Ill., a Republican lawmaker who serves as a lieutenant colonel in the Air National Guard. 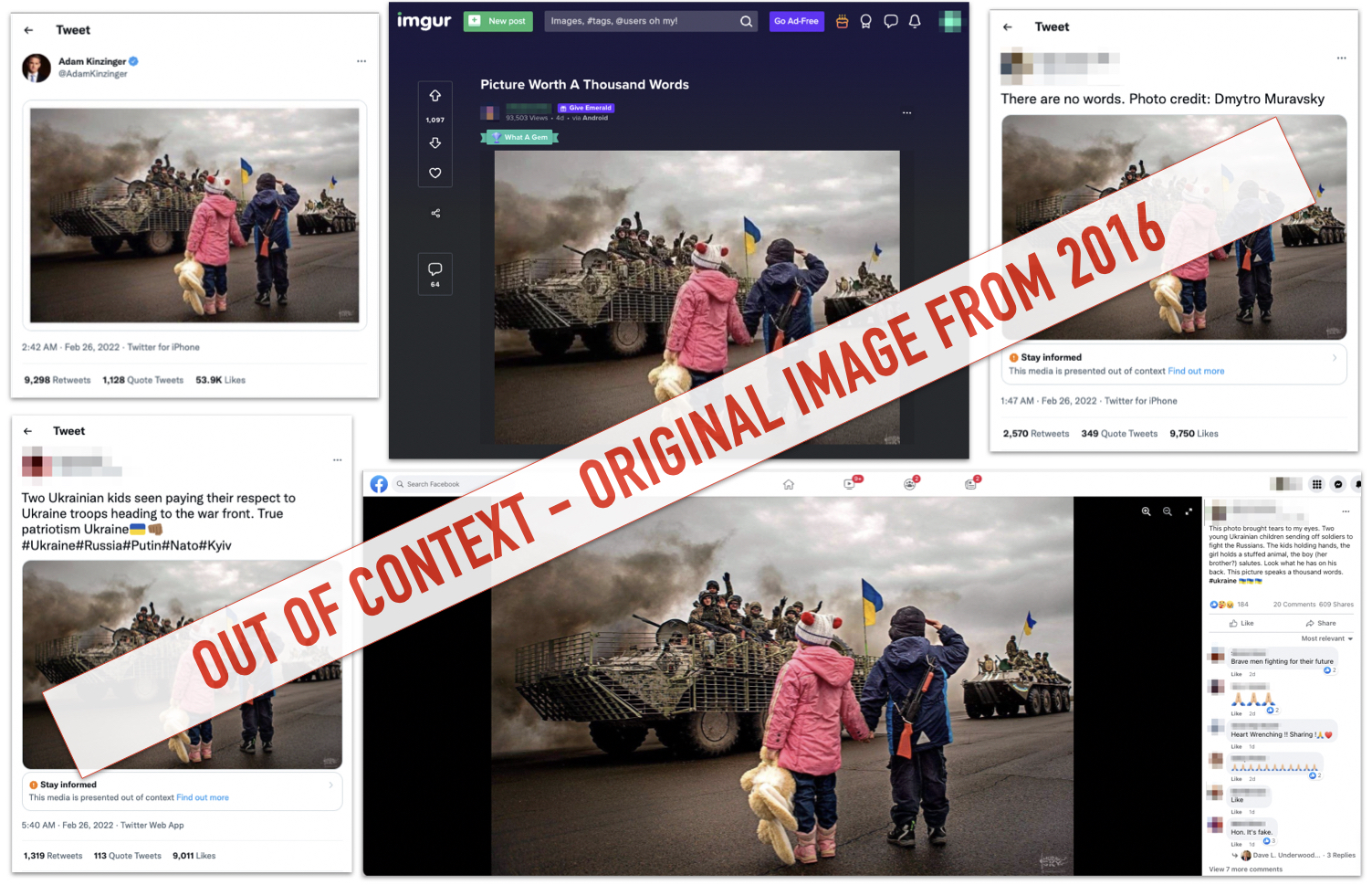 Various social media posts shared the same 2016 image as though it depicted a scene in Ukraine in 2022.

"This photo brought tears to my eyes," another post shared on Facebook said. "Two young Ukrainian children sending off soldiers to fight the Russians."

The photo is watermarked to Ukrainian photographer Dmitry Muravsky. Muravsky shared the photo on Facebook in 2016, and so did Ukraine’s Ministry of Defense.

Later that year, the Ministry of Defense announced that Muravsky, a volunteer photographer, had been dismissed from his position amidst accusations that he had staged photos.

The photo gaining attention now has also been blown up into a memorial in the Luhansk region of Ukraine. The memorial was captured in several recent Associated Press photographs.

Social media posts claim that a viral image, which shows two young children holding hands and saluting troops, was captured in Ukraine in 2022. But the photo traces back to 2016.

Ukrainian Ministry of Defense, "Volunteer photographer Dmytro Muravskiy dismissed from the position of the Volunteer Adviser to the Minister of Defence of Ukraine," Aug. 28, 2016

Pearson Sharp
stated on March 11, 2022 a TV segment:
The Russian airstrike on a maternity hospital in Mariupol, Ukraine, had “the makings of yet another false flag operation” led by the U.S.