Tweets
stated on March 7, 2022 in a tweet:
“We haven’t seen a single American megachurch offer anything to help Ukrainians.”

Nearly 3 million people have fled Ukraine in what the United Nations now calls the fastest-growing refugee crisis in Europe since World War II.

The mounting challenge to evacuate, clothe, feed and shelter Ukrainians after Russia’s invasion has prompted a massive humanitarian response. But some people on social media accused Christian megachurches of not stepping up to help.

Some posts on Facebook and Twitter combine a photograph of Lakewood Church, the Houston, Texas, megachurch led by Joel Osteen, with the following text:

Another tweet shared on March 14 claimed, "You’ll notice that you haven’t seen one multimillion dollar tax exempt MegaChurch or their grifting sinister millionaire owners sending relief or supplies to Ukrainian refugees, which isn’t surprising because they don’t even help U.S. citizens during times of disaster."

But these posts aren’t true. Multiple megachurches around the country have been raising funds to help Ukrainians. 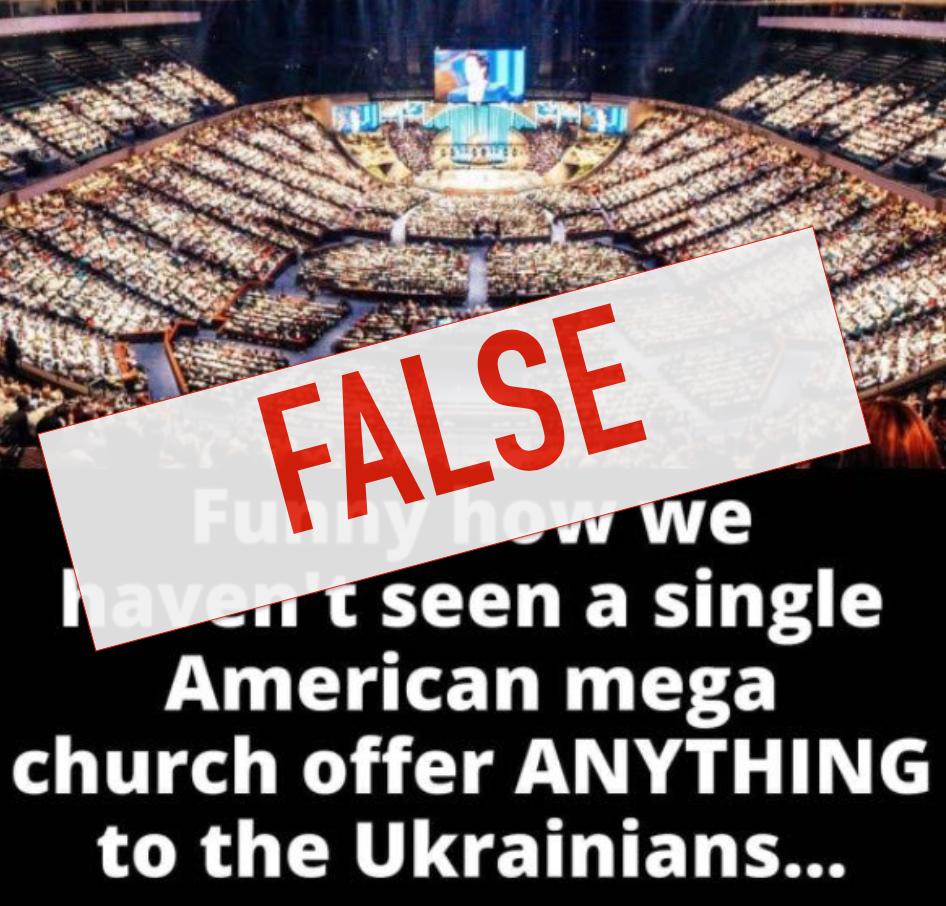 The term "megachurch" generally refers to any active Protestant congregation with an average weekly attendance of 2,000 people or more, according to the Hartford Institute for Religious Research. The institute estimates that there are approximately 1,750 megachurches in the U.S.

Lakewood Church is one of the largest megachurches in the U.S., with a weekly congregation of about 45,000 people. On March 7, the church shared a Facebook video featuring Osteen’s brother, Dr. Paul Osteen, talking about the church’s efforts to help Ukrainians in need.

"We are doing what we can do to help partner churches in Slovakia who are helping refugees fleeing the war," Osteen says in the clip. "We're looking for opportunities to work with refugees in Poland, and with our long standing partnership with Dr. Todd and Sue Price, we’re working inside of Ukraine to help those who are in the midst of the conflict right now."

The video says that John Osteen, Joel and Paul’s father, kickstarted donations in 1996 that helped build a church in Ukraine that is now feeding refugees.

Gateway Church, another megachurch in Texas, has set up a crisis relief fund to support people in Ukraine and the surrounding region.

Saddleback Church, a megachurch located in Lake Forest, California, has an advance relief team connecting with local pastors in Ukraine and Poland who are caring for hundreds of Ukrainian refugees. The church’s website features ways people can help and has provided multiple updates on its efforts in the region.

The Rock Church, a megachurch in San Diego, California, is directing people to its partner organization, Crisis Response International, and told PolitiFact that it’s in the process of establishing a Ukraine relief fund.

Crossroads Church, an Ohio-based megachurch, partners with humanitarian and disaster relief organizations Convoy of Hope and World Vision, which both have operations on the ground in Ukraine.

Other church networks, like the United Methodist Committee on Relief and Catholic Relief Services, are collecting donations and deploying staff and resources.

We rate posts that say no megachurches are raising money for Ukraine relief False.

The United Methodist Committee on Relief, How to assist the Ukrainian people, March 1, 2022