Facebook posts
stated on March 17, 2022 in a Facebook post:
“In April 1997, there was a ‘gas out’ conducted nationwide in protest of gas prices. Gasoline prices dropped 30 cents a gallon overnight.”

In the wake of rising gas prices amid Russia’s attacks on Ukraine, social media users have revived a more than 10-year-old myth about a surefire way to drive down costs at the pump.

"In April 1997, there was a ‘gas out’ conducted nationwide in protest of gas prices," or so the long-repeated story goes. "Gasoline prices dropped 30 cents a gallon overnight."

Facing higher gas prices than Americans have seen in years, some posts, such as this one from March 17, shared a call to action: "Don’t pump gas on April 15, 2022!"

"If running low, just get your gas the day before on April 14 or the day after on April 16," it said. "Every little bit helps."

This 1997 "gas out" hoax has been circulating online for years. PolitiFact looked into it about 10 years ago and rated it Pants on Fire. Other news outlets also debunked the story in 2007, 2011 and 2019. 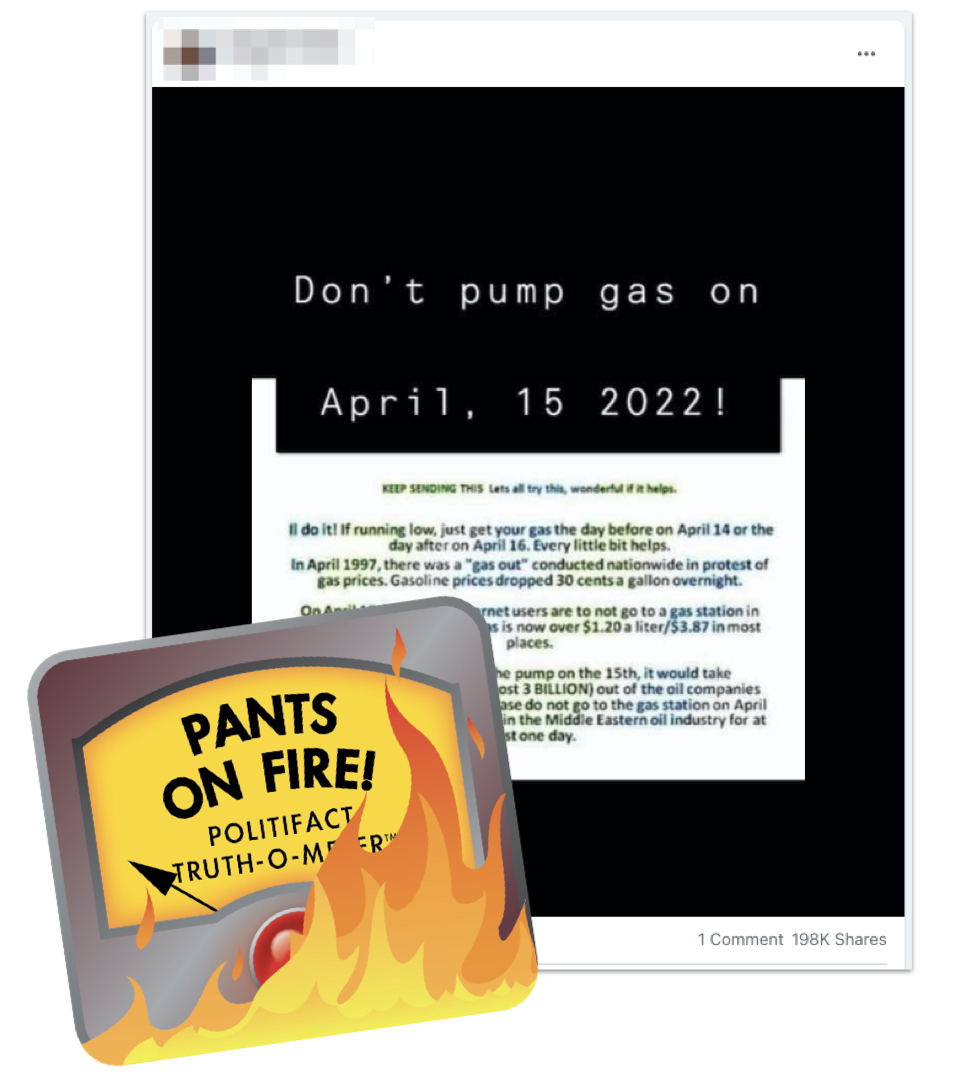 In 2012, Patrick DeHaan, a senior petroleum analyst at GasBuddy.com, told PolitiFact there’s no evidence to support the idea that a boycott drove gas prices down in 1997 and called the claim "an outright myth."

We reviewed online news archives and found no evidence of a successful gasoline boycott in 1997. There were mentions of later gasoline boycotts — including one promoted by email chains in 1999 — but, in the end, the prices of gas "had no major fluctuations," at the time of said boycotts, PolitiFact reported.

In April 1997, the average national price of a gallon of gasoline varied only slightly, according to U.S. Energy Information Administration data. Prices were as follows:

There was no indication from the weekly average prices that a boycott had dropped the price of gas by 30 cents overnight at any point during the month.

"Depending on ongoing market events at the time, the impact on demand could cause pump prices to decline," said Devin Gladden, a spokesperson for AAA. "However, a one-day event is likely to have a limited impact since longer-term trends could still cause prices to continue moving along that set direction."

It takes time for gas prices to respond to changes in oil prices, and oil prices are influenced by changes in supply and demand. Boycotting the purchase of gasoline for a single day is unlikely to have a significant impact. As both DeHaan and others noted, it has the effect of simply shifting sales from one day to another.

A post claimed there was a ‘gas out’ conducted nationwide in protest of gas prices. Gasoline prices dropped 30 cents a gallon overnight."

PolitiFact found no evidence to suggest that this boycott happened, and the experts we consulted in 2022 and 2012 knew of no such protest in 1997. It often takes time for gas prices to respond to changes in demand, so it is unlikely a single-day boycott would drive down prices as quickly and drastically as the post suggests, experts said.

We rate these claims Pants on Fire.

PolitiFact, "‘Gas out’ boycott in 1997 pushed gasoline prices down 30 cents overnight, according to Facebook posts," April 15, 2012

Interview with Devin Gladden, a spokesperson for AAA, March 15, 2022

Buzzfeed News, "A ‘Gas Out’ Day Idea To Lower Gas Prices Is Going Viral But It's Been Proven To Be Ineffective And Inaccurate," April 12, 2019