Viral image
stated on May 16, 2022 in a Facebook post:
CBS News reported that two more suspects were arrested in the Buffalo shooting, and that one more victim was identified.

One such account misleadingly appeared to be a CBS News outlet in New Zealand and tweeted about the supposed arrest of two more suspects in the shooting, as well as another victim. Social media users responded by circulating a screenshot of the posts.

The second tweet said: "Another victim of the #Buffalo mass shooting has been identified as Bernie Gores, aged 35."

Facebook posts sharing images of these tweets were flagged as part of Facebook’s efforts to combat false news and misinformation on its News Feed. (Read more about our partnership with Facebook.) 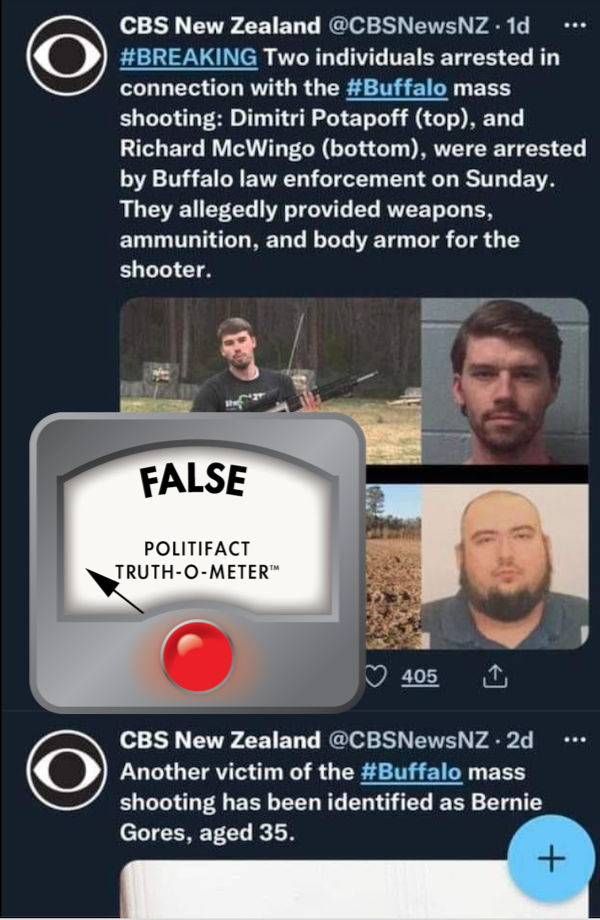 (Screenshot from Facebook)
The Twitter account for CBS New Zealand — @CBSNewNZ — uses the same logo as the actual CBS News but it isn’t affiliated. This CBS New Zealand account was created in March 2022 and had seven followers as of May 17.
Police have arrested one suspect in the shooting: Payton Gendron, whom authorities identified as the gunman. And a person named Bernie Gores is not among those who were killed. But we’ve previously written about someone by that fictitious name in connection with false claims about a journalist executed by the Taliban.
RELATED VIDEO
Richard McWingo, as you may have guessed by the last name, does not appear to be a real person. Searching for the name on Google only returned four results, all connected with this tweet, and the White Pages has no entries for that name anywhere in the United States.
Dimtri Potapoff appears to be the fictional character created by a YouTuber known for filming himself shooting guns.
We rate this post False.

The New York Times, Gunman Kills 10 at Buffalo Supermarket in Racist Attack, May 14, 2022

YouTube, If the Russian Army Captured FPSRussia | PKA, visited May 17, 2022

Viral image
stated on November 13, 2022 an Instagram post:
Ballots recovered from a Santa Clara County, California, ravine are evidence of “how the left cheats to win.”

Instagram posts
stated on November 17, 2022 an Instagram post:
A fake Nancy Pelosi said she won’t seek the speaker position again because the real Pelosi was arrested in 2021.

Viral image
stated on November 15, 2022 an Instagram post:
Photo shows “ballots not counted in California and this is only one polling location. Yet Gavin Newsom was declared governor minutes after polling stations closed.”

Viral image
stated on November 15, 2022 an Instagram post:
“Florida man arrested for using a lost U.S. nuke to power his home for more than 27 years.”

Instagram posts
stated on November 13, 2022 a post:
Footage shows Dallas pollbooks fraudulently “adding hundreds of voters in real time as the poll was being closed.”

Viral image
stated on November 15, 2022 an Instagram post:
“The CEO of FTX is the daughter of the chairman of the SEC.”