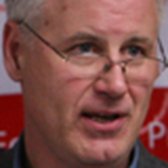 Mike Stenhouse is the chief executive officer of the Rhode Island Center for Freedom and Prosperity, a conservative think tank. A Cranston, R.I., native, he is a former player for the Boston Red Sox, Minnesota Twins and Montreal Expos. Previously, he was executive director of the Ocean State Policy Research Institute. He has an economics degree from Harvard University, served as chairman for the 2010 Rhode Island Clean Slate campaign, and as vice president of the Board of Directors for Rhode Island Special Olympics.