Why we fact-checked Jon Stewart and The Daily Show, and 11 reasons we’re sad to see him go

Television host Jon Stewart tapes an episode of "The Daily Show with Jon Stewart" in New York in this 2011 file photo. Stewart will sign off for good Aug. 6. (AP)

Jon Stewart is wrapping up 17 years as host of Comedy Central’s The Daily Show this week.

That’s bad news for fact-checkers and all seekers of the truth.

Stewart’s show was a catalyst for nearly 80 different fact-checks or stories for us in the last six years. To be honest, we at times wondered whether we should fact-check claims coming from Stewart’s show at all; was there room for serious analysis of what is described as a comedy show?

That makes him fair game for fact-checkers, and a source of information for many Americans. A 2014 Pew Research Center poll found 12 percent of people regularly got their campaign news from The Daily Show. That’s on par with The New York Times and USA Today and higher than Politico or Rush Limbaugh’s radio show.

From our vantage point, Stewart made a real effort to present information in an accurate way. His most powerful rhetoric device was to use people’s own words against them. He did this on Monday night’s show in a segment blasting Fox News’ media reporter Howard Kurtz for blasting Stewart as gentle to President Barack Obama.

He also — and this is not a habit of many news pundits — apologized when he made a mistake, as we caught him doing a few times.

1.  He had Jessica Williams play Abraham Lincoln to debate the necessity of the Civil War. Fox News’ Andrew Napolitano argued on The Daily Show in 2014 that the Civil War was a war of choice and that slavery would have eventually evaporated.

Napolitano, a former judge, claimed in the back-and-forth that Lincoln "tried to arm the slaves" to start an insurrection.

Pants on Fire! "I know of no evidence — have never even heard it said — that Lincoln himself tried to arm those who were still slaves to enable a slave insurrection — and I very strongly doubt that any such evidence exists," Bruce Levine, a Civil War historian at the University of Illinois, told us.

2. He uses the latest technology. 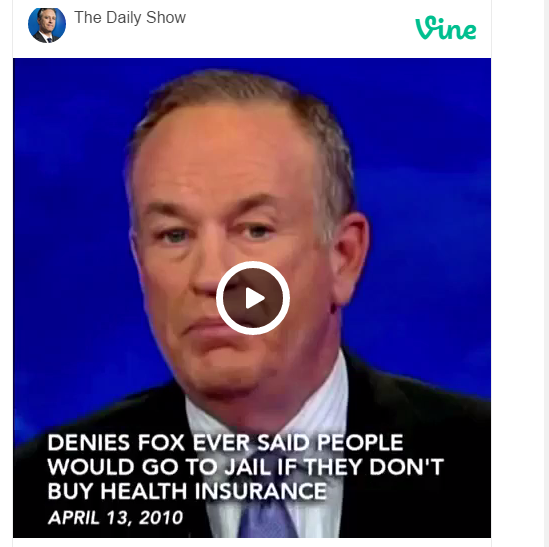 Besides making our heads hurt, the claims in the Vine almost all tracked back to work of PolitiFact and PunditFact over the years (though we stay away from the word lie).  We spent more than an hour pausing the Vine trying to catalog them all.

We found 49, not 50 "lies," a mistake The Daily Show later admitted was due to an editing error.

3. He learned he can’t even trust the History Channel. 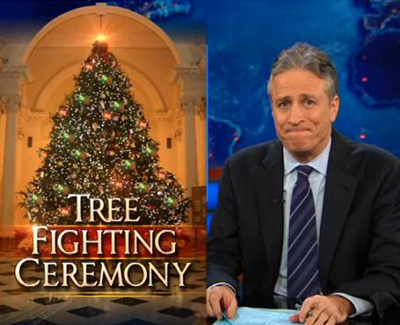 Back in 2011, during a "war on Christmas" debate, Stewart made the claim that Congress actually worked on Christmas — just like your neighborhood 7-Eleven.

"On Dec. 25, 1789, the United States Congress sat in session and continued to stay open on Christmas Day for most of the next 67 years," said a clip Stewart played from the HIstory Channel.

Pants on Fire! Daily records show the complete opposite, with just one exception each for the House and Senate. 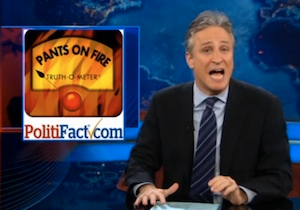 "Apparently the clip we showed was off by around 66 years!" Stewart said. "For this mistake, I was awarded the fact-checking site PolitiFact.com’s lowest grade possible ‘Pants on Fire.’ Something the people at PolitiFact must know that a gentleman such as myself is akin to a death sentence. In this dry weather my ass hair is nothing if not kindling. Of course, it’s my fault for trusting something called the History Channel! You know, with facts about things that happened in the past. The next thing you know, we’ll all find out the Nazis did not employ alien technology in their quest for world domination. You know what, History Channel? You have f----- me for the last time!"

5. And when he made another mistake.

"Who are the most consistently misinformed media viewers? … Fox viewers, consistently, every poll," Stewart said in 2011.

We found three Pew studies that superficially rank Fox viewers low on the well-informed list, but in several of the surveys, Fox isn’t the lowest, and other general-interest media outlets — such as network news shows, network morning shows and even the other cable news networks — often score similarly low. The same cannot be said for certain Fox shows, such as The O’Reilly Factor and Sean Hannity’s show, which actually score consistently well, occasionally even outpacing Stewart’s audience.

6. He apologized to us in the most epic of ways. 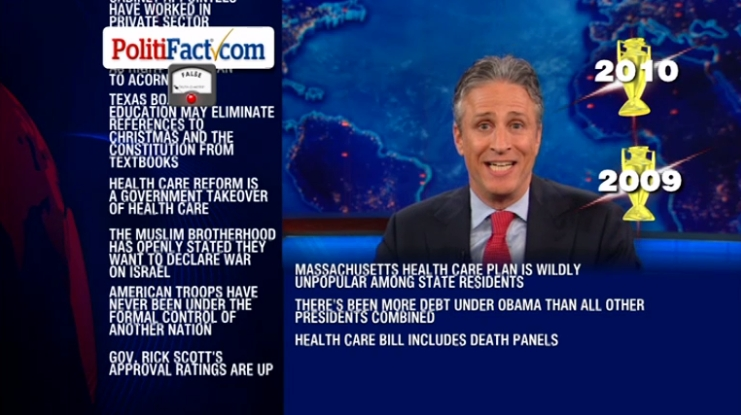 "PolitiFact — the nonpartisan fact-checking guy, or guys, or girls — thoroughly researched my statement, and they found that while, in two of the surveys, Fox News scored the lowest, in two of the polls, they were merely near the bottom. …

"I defer to their  judgment and apologize for my mistake. To not do so would be irresponsible. … That would undermine the very integrity and credibility that I work so hard to pretend to care about. Hey, I wonder, you know what? I know PolitiFact checks mostly political statements from politicians and such, but has PolitiFact ever checked Fox for false statements?

"I’m hearing they have."

He then listed 21 fact-checks of Fox News, including two "Lie of the Year" awardees, five Pants on Fires and 14 False ratings.

Glenn Beck: Less than 10 percent of Obama's Cabinet appointees "have any experience in the private sector." — False (December 2, 2009)

Gretchen Carlson: Says the Texas State Board of Education is considering eliminating references to Christmas and the Constitution in textbooks. — Pants on Fire! (March 12, 2010)

PolitiFact's Lie of the Year: 'A government takeover of health care' (December 16, 2010)

Karl Rove: "American troops have never been under the formal control of another nation." — False (March 29, 2011)

Sarah Palin: "Look at the debt that has been accumulated in the last two years. It's more debt under this president than all those other presidents combined." — False(June 1, 2011)

Kimberly Guilfoyle: If you log into the government's Cash for Clunkers Web site (cars.gov) from your home computer, the government can "seize all of your personal and private" information, and track your computer activity.     — False (August 3, 2009)

Sarah Palin: "Democrats are poised now to cause this largest tax increase in U.S. history." — Pants on Fire! (August 4, 2010)

Bill O'Reilly: "Attorney General Eric Holder is involved in the dismissal of the criminal charges" against the New Black Panther Party for voter intimidation  — False  (July 23, 2010)

Glenn Beck: John Holdren, director of the White House Office of Science and Technology Policy, "has proposed forcing abortions and putting sterilants in the drinking water to control population." — Pants on Fire! (July 29, 2009)

Glenn Beck: "Why do we have automatic citizenship upon birth? We're the only country in the world that has it." — False (June 19, 2009)

Bill O'Reilly: When White House communications director Anita Dunn said that Mao Tse-tung was "one of her favorite philosophers, only Fox News picked that up." — False (October 27, 2009)

Bill O'Reilly: "We researched to find out if anybody on Fox News had ever said you're going to jail if you don't buy health insurance. Nobody's ever said it." — Pants on Fire! (April 27, 2010) 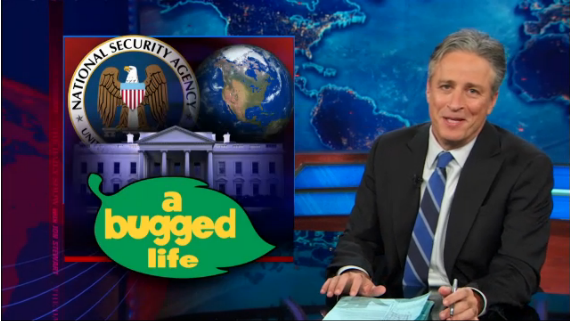 In 2013, Congress pointed out the hypocrisy in their talk over the nation’s spying program.

Congress "is bewildered at the scope and reach of our spying apparatus," Stewart said, "but in 2008 and 2012 "explicitly rejected an amendment calling for more disclosure."

8. He had his Civil War history down. 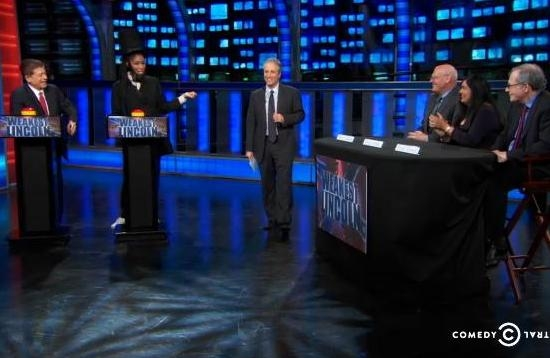 Napolitano argued that Lincoln "could have bought the slaves."

"Buying the slaves’ freedom is not as true as you might believe," Stewart rebutted. "He offered them money for their slaves, in the border states — those are the ones that hadn’t even seceded yet — and they refused."

True. Lincoln tried this in Delaware and won congressional approval to apply the principle to all states. But with no slave owners willing to come to the table, the effort failed.

The result was the Emancipation Proclamation.

9.  His interviews kept us busy. 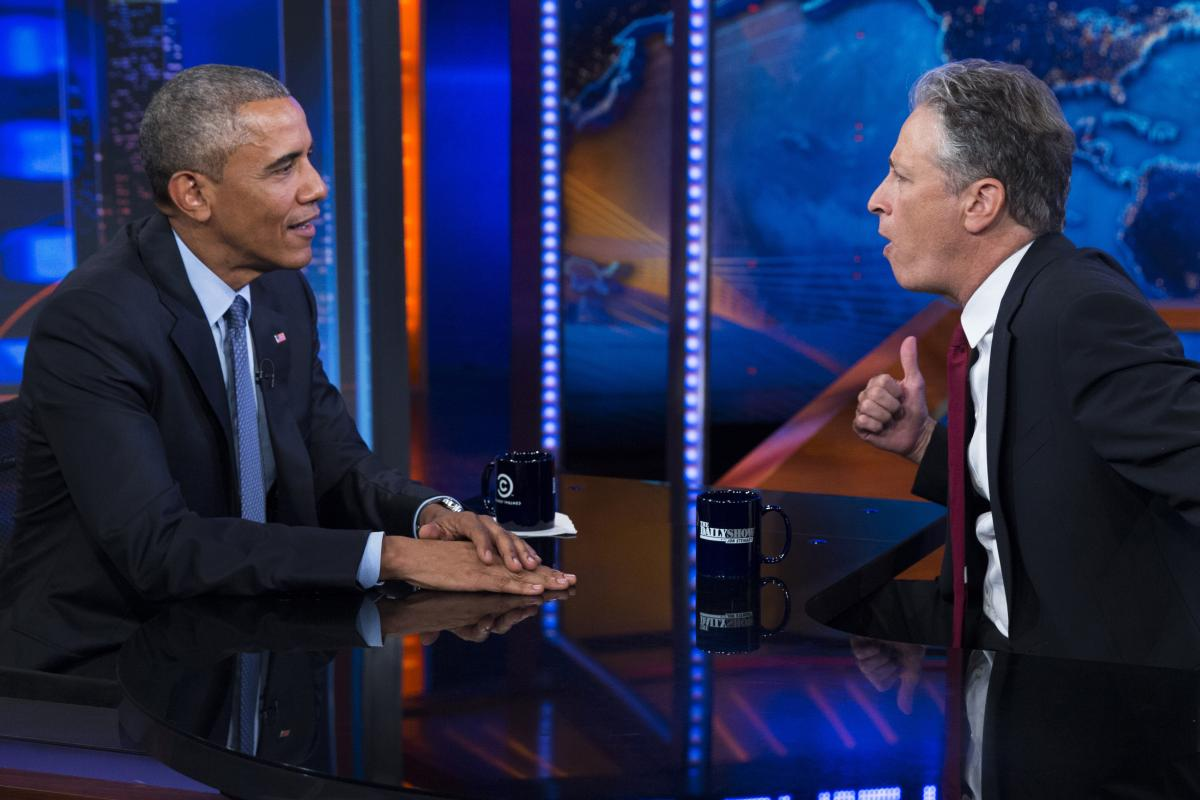 President Barack Obama's last turn on The Daily Show had familiar elements that we've come to expect from his six earlier appearances since 2005: There were some wisecracks, some laughs and some questions about hard policy.

"The economy, by every metric, is better than when I came into office," Obama claimed.

Mostly False. We found several metrics that showed that’s not the case.

"Between 2010 and 2014, there was no net in-migration from Mexico," said Clinton, responding to Trump’s remarks calling some Mexicans "rapists."

Clinton’s statistic is Mostly True. The census data is not in for 2014, but the numbers up to 2013 support Clinton’s point, as do very preliminary 2014 data.The population of people living in America but born in Mexico fell by about 40,000 since 2010. 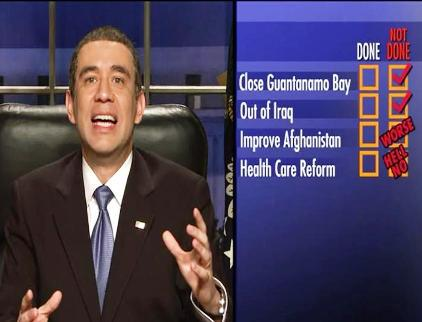 In 2009, PolitiFact decided to have a bit of fun and analyze some comments made on Saturday Night Live.

"There are those on the right who are angry. They think that I'm turning this great country into something that resembles the Soviet Union or Nazi Germany, but that's just not the case," said actor Fred Armisen, who played Obama. "When you look at my record it's very clear what I've done so far and that is — nothing. Nada. Almost one year and nothing to show for it."

Armisen-Obama then went through a checklist to show all the things he hasn't accomplished, with the categories of "Done" and "Not Done."

We highlighted the differences between the sketch and reality a few days later on CNN, which caught Stewart’s attention.

"While you were doing your research did you also find that sharks live in water and don't deliver candy grams... and that the majority of boxes do not have d---- in them?" Stewart asked.

At the end of the segment, Stewart brought in correspondents Aasif Mandvi and John Oliver. "They're the most professional network in the business, three times more professional. Most people agree they have 20 to 35 to 70 percent more facts," Mandvi claimed.

For the record, we didn’t fact-check that.