Former Florida Gov. Jeb Bush and former Secretary of State Hillary Clinton -- or at least their respective campaign staffs -- did both on Aug. 10, using graphics, hashtags and cheeky banter to debate a legitimate policy issue: the cost of higher education.

As part of promoting her college affordability plan, Clinton tweeted a graphic that said "$1.2 trillion, the amount 40 million Americans owe in student debt," accompanied by the text, "Cost won't be a barrier to an education. Debt won't hold you back." Her proposal offers federal money to states that work to rein in college costs. 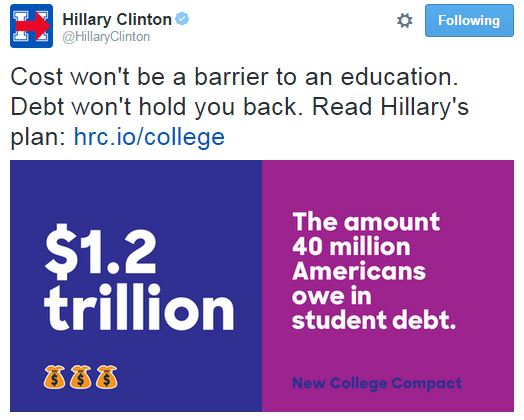 Bush, running for the Republican nomination, responded with his own graphic that said, "100 percent, the increase in student debt under this Democratic White House. Hillary Clinton: mortgaging the future of college grads for four more years." 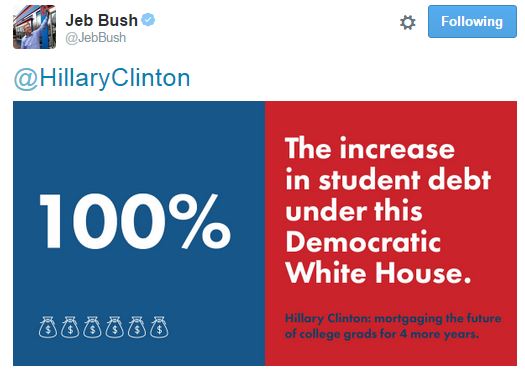 The Clinton camp shot back by "scribbling over" Bush’s graphic with the following claim: "F: The grade given to Florida for college affordability under Jeb Bush's leadership," citing the Center for Public Policy and Higher Education. 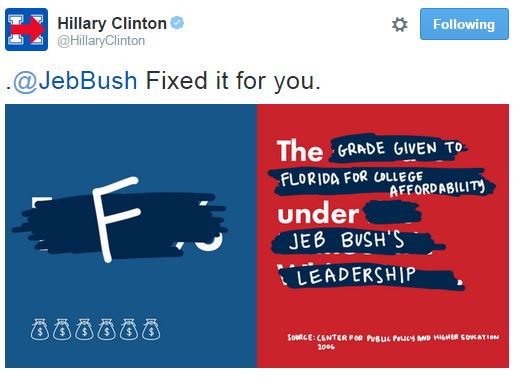 PolitiFact fact-checked two pieces of their exchange: that Florida got an "F" for college affordability under Bush and that the cumulative student debt has nearly doubled under the current White House.

Both claims have an element of truth, but they go too far when they try to pin the blame on each other. Rather, the facts point to long-term trends in shrinking college affordability that are bigger than any single administration.

"The long term trend of colleges becoming unaffordable goes back to the mid-1980s -- when private colleges started jacking up the prices," said Stephen Burd, a senior policy analyst at the New America foundation and an expert in higher education policy. "In more recent years, it's been the publics that have seen bigger percentage increases in tuition."

Bush claimed that there has been a 100 percent "increase in student debt under this Democratic White House." Has the student debt really doubled in the past seven years, and is it fair to tie it to Barack Obama’s presidency?

Experts told us that total student debt increases when tuition increases and when more people decide to pursue higher education, and the 2008 recession caused both of these things to happen -- so the recent increase is more a function of the economic downturn, rather than having a Democrat in the White House.

The economic downturn pushed states to cut higher education funding, so schools -- publics, in particular -- upped tuition to cover costs. And the recession encouraged more people to take out more loans. People decided to go back to school to shore up their employment prospects, and households had fewer resources to finance school without loans.

Additionally, there haven’t been any big policy changes so far in the Obama administration that would have affected student loan debt significantly, positively or negatively.

Because the increase in student loan debt was short of 100 percent, and the claim was missing context, we rated Bush’s statement Half True.

Clinton tweeted: "F: The grade given to Florida for college affordability under Jeb Bush's leadership."

The claim comes from the independent Center for Public Policy and Higher Education, which shut its doors in 2010. Every two years, the group published a report that graded states on various higher education-related issues, including affordability. The report sought to answer: "How difficult is it to pay for college in each state when family income, the cost of attending college, and student financial assistance are taken into account?"

But Florida was hardly alone in flunking the affordability test.

In 2006, the year the Clinton camp selected for the tweet, every state but seven received an F, and those "lucky" seven states didn’t do much better: Five ended up with a D while two got a C. The missing context from the tweet, then, is that Florida was not uniquely bad -- not by a longshot.

Additionally, our own previous fact-checking concluded that while tuition went up under Bush, it did so at a rate slower than the national average. Bush’s team pointed out several policies he helped institute on higher education, such as a First Generation Matching Grant for Floridians who are the first in their families to attend college.

Because Clinton’s claim singles out Florida, when 43 out of 50 states received an "F" that year, and ignores that Florida’s tuition didn’t rise as fast as the national average while Bush was governor, we rated the statement Half True.

So in this case, Twitter is a fun place to launch political jabs, but 140 characters does not leave much room for context.