PolitiFact’s guide to the Republican tax plans (so far)

Republicans touted their tax plans at the third GOP debate, calling for tax cuts, economic growth and the simplification of the U.S. tax code.

But many of the candidates’ own claims about their tax plans were not grounded in facts. What’s more, experts said, the idea that you could cut taxes without blowing up the federal debt is mathematically and politically impossible.

Most of the plans trumpet giveaways on the tax side, but offer almost no specifics on how to reduce spending, said Marc Goldwein, senior vice president at the bipartisan Committee for a Responsible Federal Budget.

According to analysis by the free market-oriented think tank the Tax Foundation, all but one of the formal plans released by GOP candidates would lead to revenue loss.

"It’s a race to a bottom in terms of the revenue component here. We cannot deliver $10 trillion in tax cuts," Goldwein said. "Each new plan seems to be more expensive. That may sound great to the voters. It’s all goodies and relatively little pain. But when you have trillions of dollars in tax cuts, you create a hole for yourself that’ll be hard to dig out of."

Projections of the economic impact of the plans may also understate just how much revenue would be lost. Roberton Williams of the nonpartisan think tank Tax Policy Center pointed out that people could adjust their accounting to take advantage of the incentives under each plan. What’s more, the plans lack detail, and the Tax Policy Center has declined to analyze them until more specifics are released.

Experts agreed that none of the plans as they stand have any chance of being enacted. Most of them are more symbolic posturing than realistic policy agendas, according to Joseph Thorndike, a tax historian at the nonprofit Tax Analysts.

Ambitious calls for reform and cuts are nothing new —  even the flat tax has enjoyed "several flurries of interest" — but very few of them see the light of day, Thorndike told us. Ronald Reagan, who delivered on the broad strokes of the tax plan he campaigned on, is one exception to the rule, but Reagan "also walked back on a lot of that over the years."

"Take these plans with a healthy dose of salt. A grain’s not enough," Thorndike said.

So with many spoonfuls of salt, we took a look at claims from the five leading GOP candidates about their tax plans. We found a flurry of half-truths and downright falsehoods.

Trump, the GOP frontrunner, released his formal tax plan in September, which aims to (you guessed it) "make America great again" through a variety of tax changes: 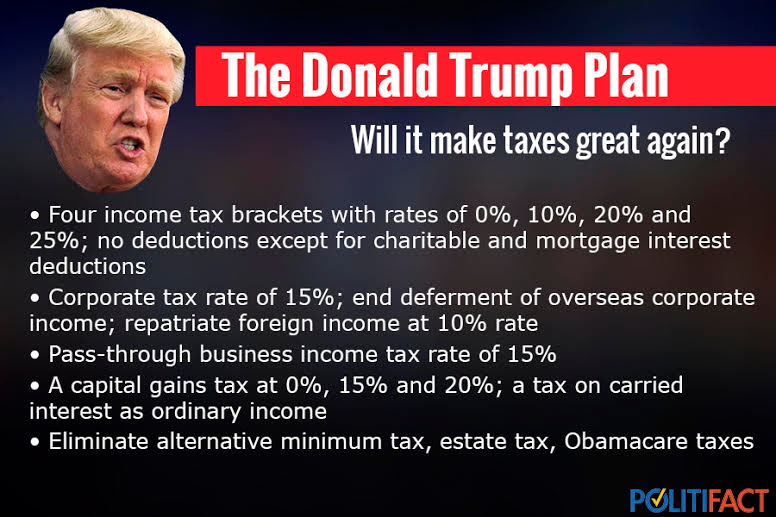 Trump claims that this plan will cut taxes without raising the deficit because of all the economic growth it will spur, but PolitiFact rated that claim False. Free market-oriented and liberal groups alike say Trump’s tax plan would lead to at least a $10 trillion revenue loss over a decade, even if it did create economic growth.

To make the plan revenue neutral, Trump would have to make huge spending cuts. But the scale of those costs would not be realistic, analysts said, especially since Trump himself has said he intends to protect popular but costly programs such as Medicare and Medicaid.

Carson, the former neurosurgeon, has yet to release a formal tax plan. This is what he has proposed so far:

During the debate, CNBC moderator Becky Quick pointed out that Carson’s proposed flat tax would lead to a $1.1 trillion hole per year. Carson denied this, but by Quick’s and his own math, it would.

Under Carson’s plan, the government would collect about $2.6 trillion in income and corporate taxes, about $0.6 trillion short of anticipated revenue and $1.1 trillion short of spending. Even if he leaves other sources of revenue intact, his proposal to get rid of the payroll and estate taxes alone puts him in this hole.

Carson crunched the numbers himself, saying his plan comes out even if you tax GDP (gross domestic product, a measure of the overall economy) at 15 percent. Experts told us it’s not possible to tax all of GDP, and even if you could, it would still create a $1 trillion hole. We rated Carson’s claim that it wouldn’t as False.

Florida Sen. Marco Rubio has seen an uptick in the polls thanks to his performance in the CNBC debate. He has proposed the following: 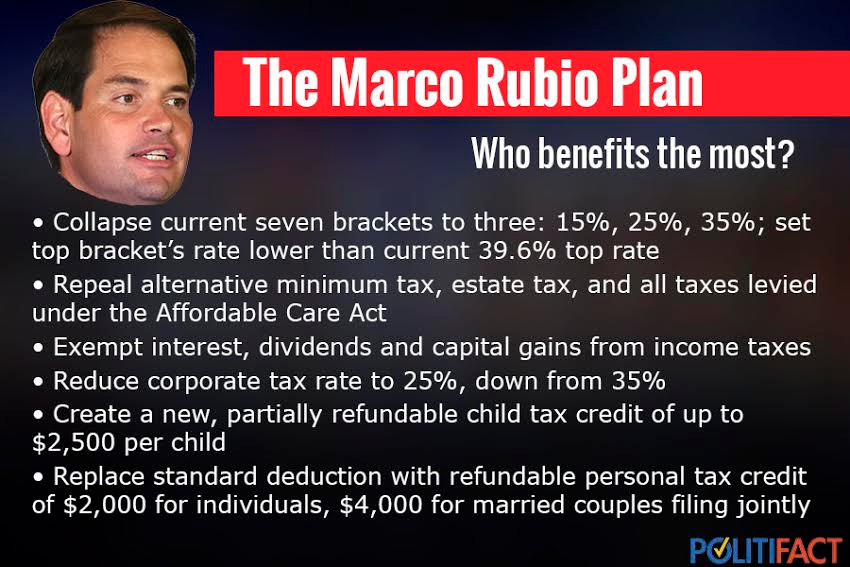 Rubio said the poor would receive more benefits "percentage-wise" than the rich under his tax plan.

That’s partially accurate. While the largest percentage gains would show up in the bottom 20 percent of Americans, the biggest gains in terms of raw dollars go to the top. We rated his claim Half True.

During the debate, Texas Sen. Cruz touted what his plan would accomplish for the economy. Here are some of its features: 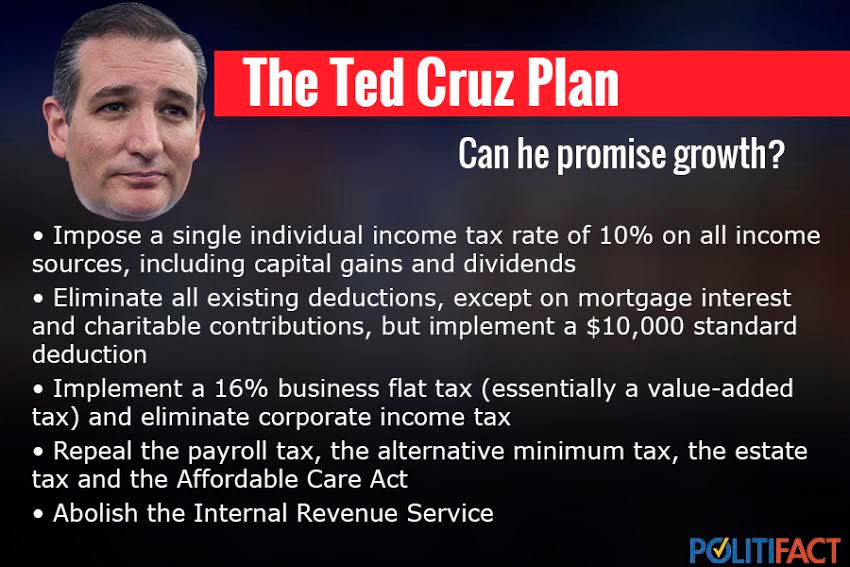 Cruz said his proposal would cause the economy to grow 14 percent, according to the pro-growth Tax Foundation. We didn’t rate his claim, but we should note that Cruz neglected to mention that the foundation calculated an estimate for the growth generated over a 10-year period. In other words, it’s not an annual growth rate of 14 percent. It’s also worth noting that prominent scholars have criticized Tax Foundation’s models in the past for overly optimistic estimates of how much tax policy proposals would impact the economy. 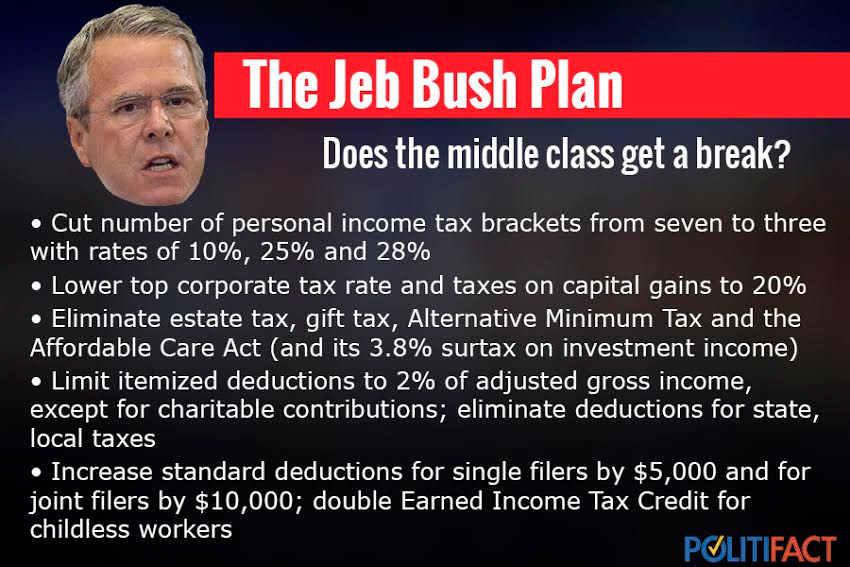 Our research showed that middle-class families could potentially realize a higher percentage tax break, based on Bush’s plan. But Bush’s own analysis looked only at those who don’t itemize deductions. In practice, it’s likely the highest earners would see the real windfall from Bush’s plan. We rated Bush’s claim Mostly False.

So far, nine out of the 14 Republican candidates have rolled out formal tax plans, but only seven had enough details for the Tax Foundation to model, said foundation president Scott Hodge. (The others belong to Ohio Gov. John Kasich and former Arkansas Gov. Mike Huckabee.)

As the field narrows, the plans could become more substantive or disappear into the ether.

"The interesting question is when we boil down to fewer candidates whether candidates will refine their plans further," said Williams, of the Tax Policy Center. "Some have lots of detail already. But others, particularly Carson, have only dim outlines and some — (Carly) Fiorina, (Lindsey) Graham — have offered nothing beyond the broadest of platitudes."

Williams and Thorndike, the tax historian, both see a divide between the mainstream plans that retain most of the current tax code (Bush, Trump, Rubio) and the ones that seek to radically change it (Carson, Cruz, Sen. Rand Paul, Huckabee).

The more conventional plans that propose modest changes have some potential, but that doesn’t mean they’re ready to go as is, according to Goldwein.

And keep in mind Congress has a huge role in creating a new tax system, as legislation has to make it through both the House the Senate.

The makes challenges facing the more ambitious plans all the more difficult. According to Thorndike, if voters elect a Republican president and Republicans retain control of both chambers of Congress, "we might see some pretty dramatic legislation -- not an $11 trillion tax cut like Donald Trump wants, but a cut."

"But any other arrangement?" he said. "There’ll be no significant tax reform."

Email and phone interviews with  Marc Goldwein, senior vice president at the Committee for a Responsible Federal Budget, Nov. 4, 2015