President Barack Obama sheds tears as he talks about the victims of the 2012 Sandy Hook Elementary School shooting during a press conference about his executive actions on federal gun control on Jan. 5, 2016, in Washington. (Getty Images)

It was an issue over which President Barack Obama openly wept.

Following a mass shooting at an elementary school in Newtown, Conn., in which 20 of the 26 victims were children, Obama addressed gun violence on Dec. 14, 2012, in a tearful White House press conference.

Obama lamented the familiarity of such a heart-breaking tragedy, declaring that "we're going to have to come together and take meaningful action to prevent more tragedies like this, regardless of the politics."

His eight years in office included many more headline-grabbing attacks.

Gunmen with semi-automatic rifles or handguns killed dozens in attacks at a church in Charleston, S.C.; a Chattanooga, Tenn., armed forces recruiting center; a community college in Roseburg, Ore.; a community center in San Bernadino, Calif.; a movie theater in Aurora, Colo.; a Sikh temple in Oak Creek, Wis.; two separate incidents years apart at Fort Hood, Texas; the Washington Navy Yard; and the Pulse nightclub in Orlando, which had the highest death toll of any mass shooting in modern American history, with the gunman killing 49 and wounding 53 others before killing himself.

Obama’s first-term record was more focused on gun rights than control. In 2010, he signed bills allowing Amtrak passengers to pack guns in their luggage and carry loaded firearms into national parks.

Overall, adding any restrictions was a non-starter among gun rights activists and lawmakers, who often refused to debate more than 100 gun-control measures introduced since U.S. Rep. Gabrielle Giffords, D-Ariz., was shot in January 2011.

During his 2012 re-election campaign, Obama said he wanted to work toward reintroducing a federal assault weapons ban, because "weapons that were designed for soldiers in war theaters don't belong on our streets."

With little interest from Congress, renewing that ban rates as a Promise Broken.

"The gun control-gun rights debate is already so heated and often is deadlocked so that very little legislation, whether prompted by a mass shooting or any other form of violence, is passed," said Jaclyn Schildkraut, an assistant professor at the State University of New York at Oswego’s Department of Public Justice.

Schildkraut was a co-author for a 2013 article that showed while some school shootings in particular prompted some lawmakers to introduce proposals for stricter gun control in recent years, very few passed.

Part of the reason a new assault weapons ban didn’t gain traction in Congress under Obama was because the prior assault weapons ban, from 1994 to 2004, didn’t stop violent incidents like mass shootings, Schildkraut said. For example, one of the weapons used in the 1999 Columbine shootings, an IntraTec TEC-DC9, was on the list of banned guns, she said.

Obama couldn’t institute another ban without Congress, but he could still strengthen existing laws. (He had promised to "enforce the laws we’ve already got" during his re-election campaign. We rated that a Promise Kept.) He included the ban as part of a sweeping set of suggested legislation and 23 executive actions he announced in January 2013.

"There is little more that Obama could have done on gun control," UCLA constitutional law professor Adam Winkler said. "The president's power is limited, and the NRA wrote the laws to restrict what the executive can do." 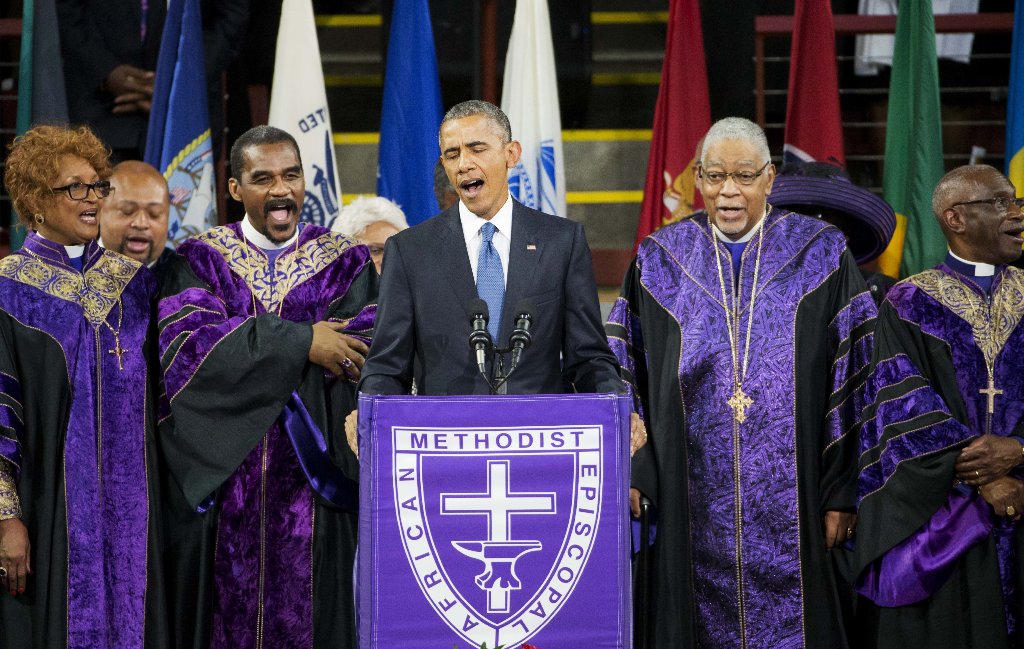 President Barack Obama sings "Amazing Grace" during a June 26, 2015, funeral service for the Rev. Clementa Pinckney, one of nine people killed in a shooting at Emanuel AME Church in Charleston, S.C. (AP photo)

After those directives, he announced in April a focus on researching and promoting smart gun technology, which requires firearms to be keyed to specific users in order to work. He also announced the Social Security Administration was working to add mental health records to background checks.

Most of Obama’s actions didn’t require direct action from Congress, which debated annually how to fund federal law enforcement agencies and had waffled on cash for a 2007 law to improve background checks.

Instead, Obama focused more on making and keeping gun control issues a topic of conversation for agencies and lawmakers, according to Christian Heyne, legislative director at the Coalition to Stop Gun Violence.

"There were some really smart ways for an administration to do what it could without new gun laws," Heyne said. "The president really used the bully pulpit as best he could with a Congress stuck in unprecedented gridlock."

Whether any of Obama’s actions remain in place is up to the next president, Republican Donald Trump.

"Obama's executive actions on guns are likely to be reversed quickly," Winkler said. "The NRA has close ties to Trump and the organization is eager to reverse Obama's reforms."