A graphic circulating on right-wing websites and social media titled the "Top 10 things we learned today" claims to tell you everything you need to know about Comey’s June 8 Senate appearance starting with "Trump was never under investigation," "Trump did not obstruct justice," and "Trump did not collude with Russia." It then goes on to list reasons why "the Russia story is dead" and new details about the investigation into Hillary Clinton’s private email server. 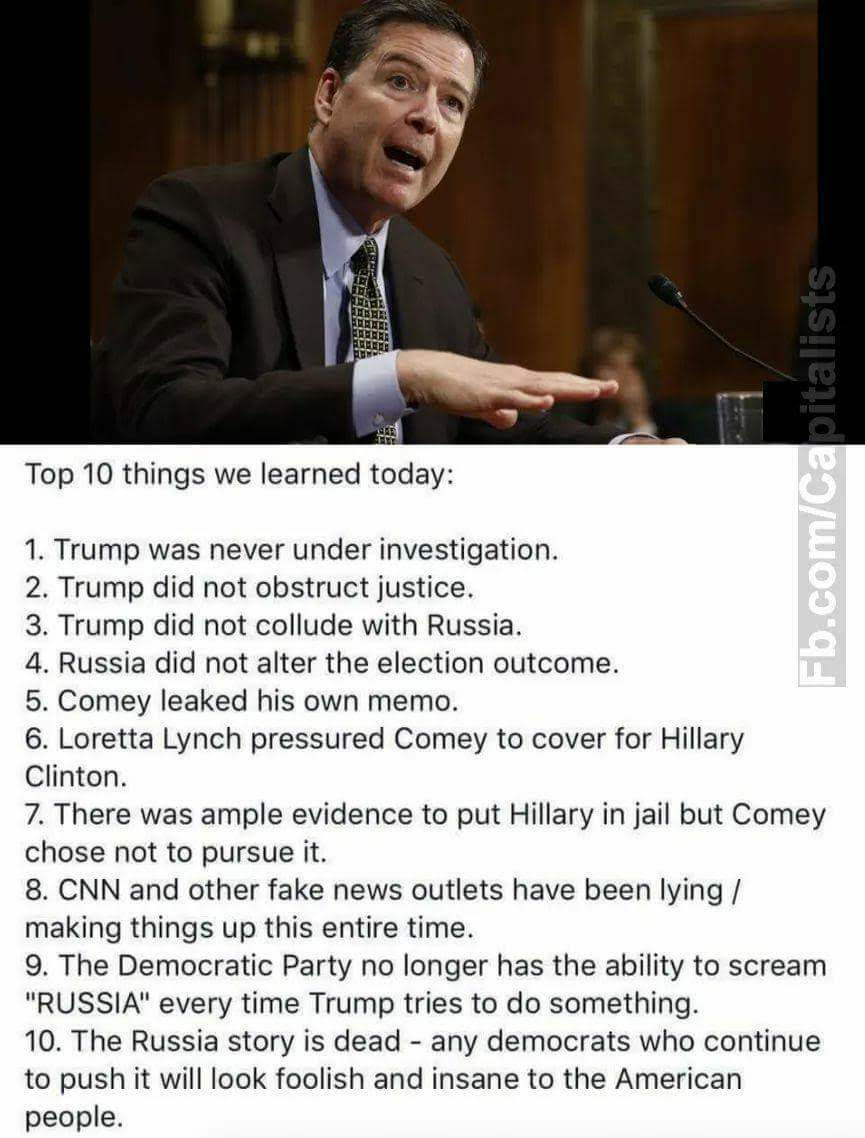 This list twists Comey’s words and presents a misleading, one-sided view of his testimony. Here are the points, fact-checked. (And for a more measured take, check out our round up of the most important moments from the Comey hearing.)

"Trump was never under investigation."

This is accurate to a point. Comey confirmed that Trump wasn’t personally under investigation — though his campaign was — for as long as Comey was at the FBI.

"I gather from all this that you're willing to say now that, while you were director, the president of the United States was not under investigation. Is that a fair statement?" asked Sen. James Risch, R-Idaho.

But after May 9, 2017, the day Comey was fired, it’s unclear. There’s no information at this point that would indicate whether Trump came under investigation in the month between Comey’s dismissal and his June 8 appearance before Congress.

It’s worth noting, though, that the Washington Post reported on June 14 that special counsel Robert Mueller is looking into the possibility that Trump obstructed justice. The story’s sources were anonymous, however. 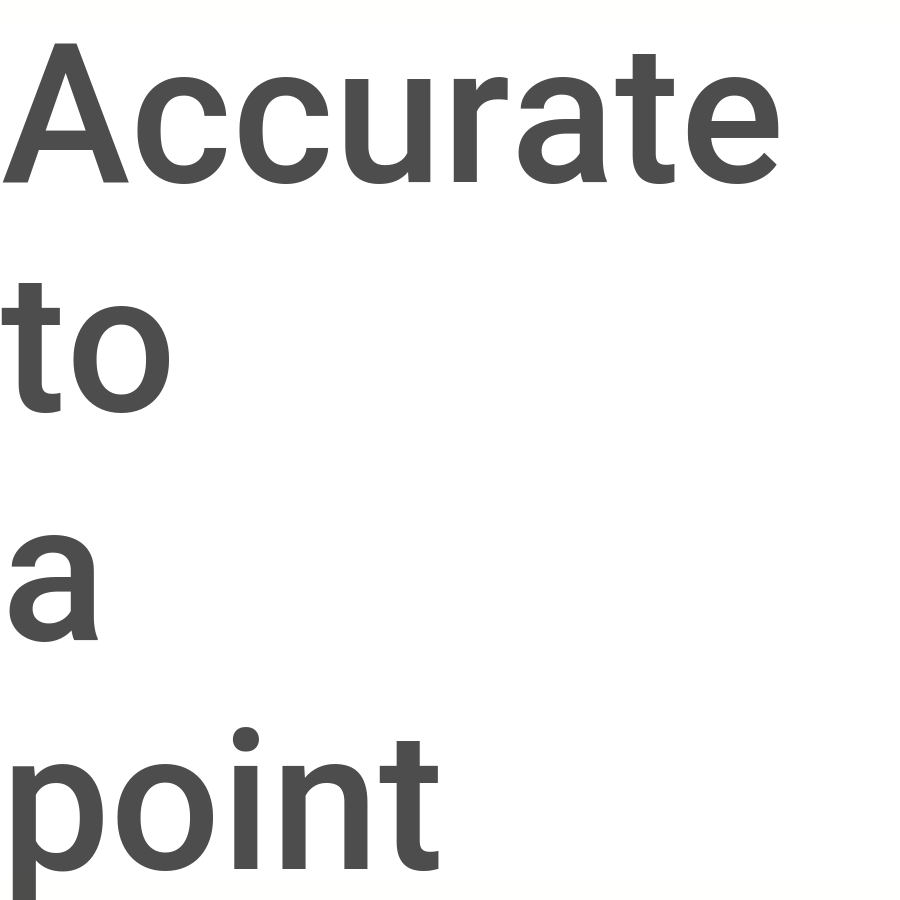 Comey’s testimony did not provide a definite answer on whether Trump obstructed justice. As Comey said in the hearing, "I don't know, that's Bob Mueller's job to sort that out."

Comey said he believes Trump fired him over the Russia investigation, and he also said that Trump asked him to get the FBI to back off its investigation into former White House national security adviser Michael Flynn and payments Flynn received from foreign governments.

Indeed, some observers interpreted Comey’s testimony as a clear demonstration of obstruction, while others saw it as exonerating Trump completely on these charges. Comey declined to take a side during his testimony.

Federal law provides several avenues for pursuing obstruction of justice charges. Reaching a guilty verdict would require a prosecutor to prove that Trump used or threatened force to obstruct, influence or impede a proceeding while having a "corrupt" state of mind. But it’s unlikely a president would ever face a traditional prosecution for obstruction of justice; the remedy instead would be impeachment, as described in the Constitution.

"Trump did not collude with Russia."

The graphic claims this, but we didn’t get a definitive answer on this from Comey’s hearing, either. The hearing was more about whether Trump obstructed justice than it was about the findings of the ongoing Russia investigation.

Cotton also asked Comey about whether the FBI had any evidence that the Trump campaign colluded with Russian actors. Comey declined to answer.

"I just don't want to go down that route anymore because I'm — I want to be fair to President Trump," Comey replied. "I am not trying to suggest something nefarious, but I don't want to get into the business of not to this person, not to that person."

"Russia did not alter the election outcome."

Comey did say he was "confident" that Russia hadn’t altered any votes because he hadn’t seen any evidence for that as FBI director. But votes tallies are just one way in which Russia could have affected the election outcome.

The FBI and other intelligence agencies are confident that Russia interfered in the election by hacking into political organizations and through a misinformation and propaganda campaign.

That said, the intelligence community did not assess whether Russia’s actions actually had a measurable impact on the election outcome or public opinion.

"We’ve offered no opinion, have no view, have no information on potential impact because it’s never something that we’ve looked at," Comey told Congress in March. 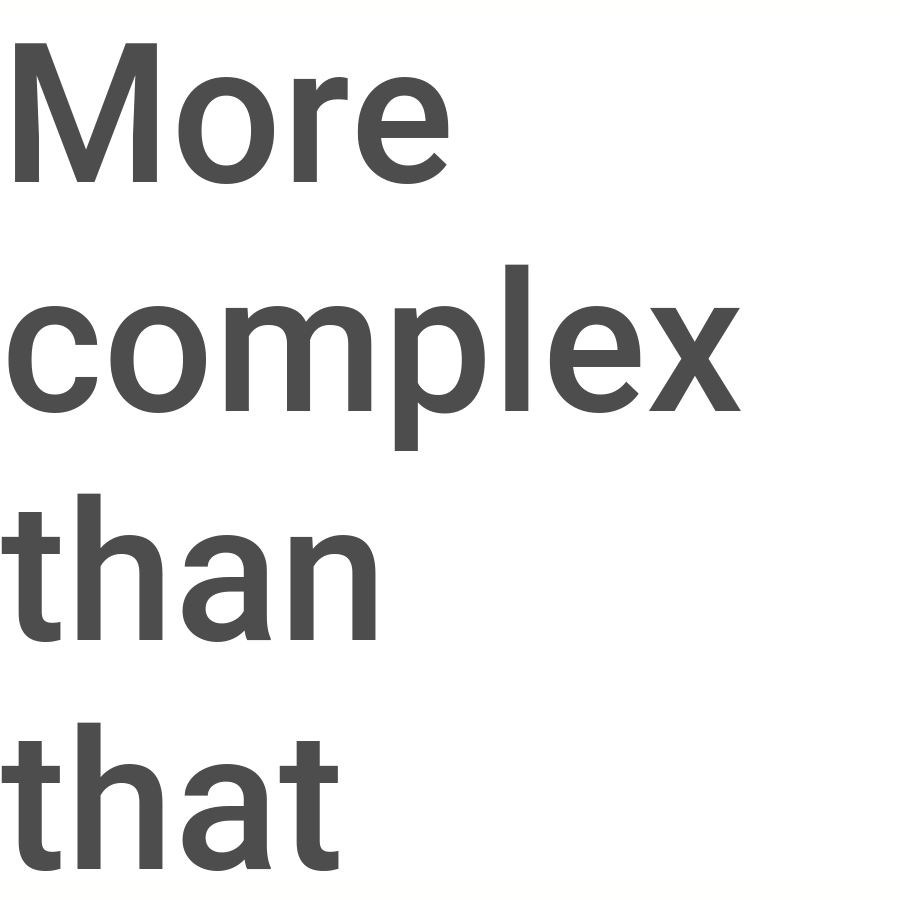 Comey said he was concerned Trump "might lie," so he wrote memos describing their interactions in detail. When Trump hinted publicly that he might have tapes of their conversations, Comey gave one of his memos detailing the Flynn incident to a friend, Columbia Law professor Daniel Richman, who in turn gave the information to the New York Times.

"My judgment was, I need to get that out into the public square," Comey said. "I asked a friend of mine to share the content of the memo with a reporter. Didn't do it myself for a variety of reasons. I asked him to because I thought that might prompt the appointment of a special counsel."

Comey specifically made his memos unclassified. Several law professors have told us there are no laws prohibiting Comey from sharing unclassified information about conversations he had with Trump.

This is a big conclusion to draw based on one detail we learned in the Comey hearing. Comey said that former Attorney General Loretta Lynch asked him to play down the significance of the Clinton email investigation, and there was at least an appearance of a conflict of interest.

"At one point, the attorney general had directed me not to call it an investigation, but instead to call it a matter, which confused me and concerned me," Comey said.

He also said former President Bill Clinton’s private meeting with Lynch on an airport tarmac last year also contributed to his decision to break with Justice Department protocol and make a public statement about the Clinton email investigation.

"I had to do something separately to protect the credibility of the investigation, which meant both the FBI and the Justice Department," he said.

"There was ample evidence to put Hillary in jail but Comey chose not to pursue it."

This is the exact opposite of what Comey said. Despite his concerns about Lynch, he reaffirmed what he has said for almost a year now: Her email setup may have been careless, but there wasn’t enough of a case to pursue criminal prosecution. 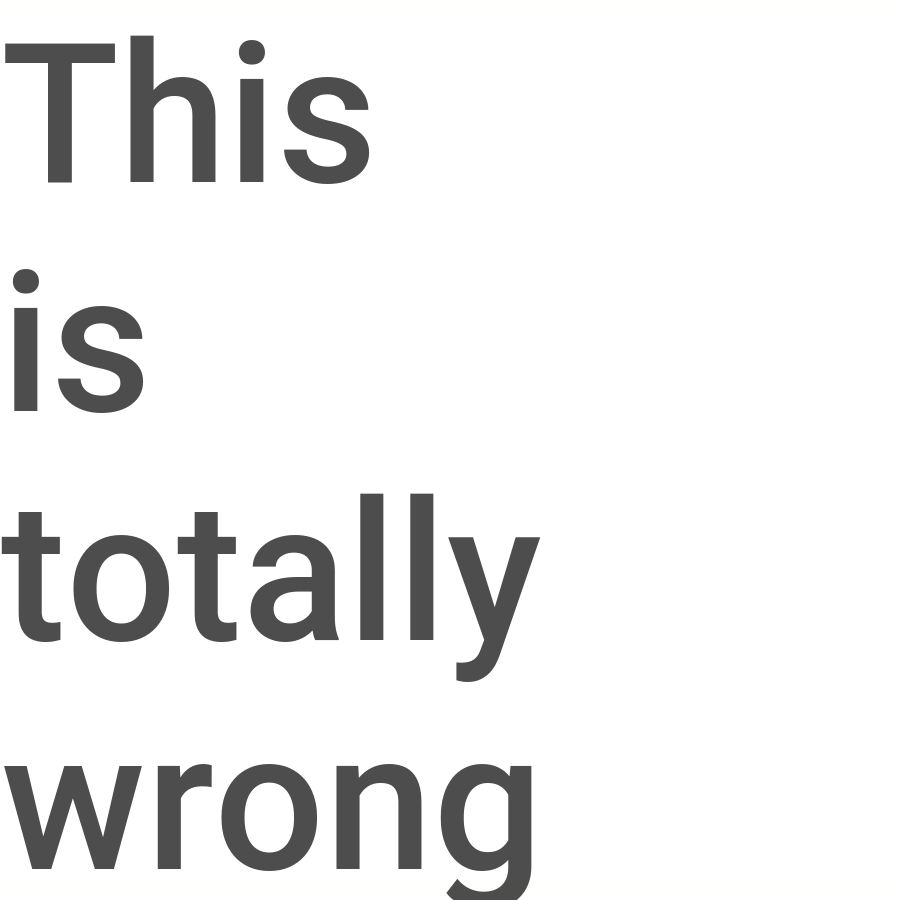 PolitiFact Rating:
This is totally wrong
Comey's testimony shows "There was ample evidence to put Hillary in jail but Comey chose not to pursue it."
'Top 10 things we learned today'
A viral message

This is a ridiculously inaccurate statement.

It’s possible the statement is referring to the fact that Comey disputed a single Feb. 14 New York Times story about Trump campaign associates and their Russia contacts. The New York Times stands by its reporting.

Without naming names, Comey said some other news reports have been inaccurate.

But nothing else came out in the hearing that contradicted the overarching storyline about the Russia investigation and related probes. In fact, Comey’s testimony corroborated several major points that news organizations had reported but attributed to anonymous sources, like the fact that Trump sought a "patronage relationship" and requested Comey’s loyalty.

"The Democratic Party no longer has the ability to scream ‘RUSSIA’ every time Trump tries to do something," and "The Russia story is dead - any Democrats who continue to push it will look foolish and insane to the American people."

These final two points are a matter of opinion rather than fact-based statements. But Comey’s testimony made clear that this Russia story — particularly the issue of Russian actors meddling in the 2016 election — is real and far from dead.

"The Russians interfered in our election during the 2016 cycle," Comey said. "They did with purpose. They did it with sophistication. They did it with overwhelming technical efforts. It was an active measures campaign driven from the top of that government. There is no fuzz on that. It is a high confidence judgment of the entire intelligence community and the members of this committee have seen the intelligence. It's not a close call. That happened. That's about as unfake as you can possibly get."