If you're fooled by fake news, this man probably wrote it
By Joshua Gillin May 31, 2017

If you’ve seen a fake news story on the Internet, there’s a good chance it came from the mind of a 45-year-old Maine man who umpires Little League games.

These stories are completely made up. But his stories have become so popular that they’re being stolen by other fake news authors who post the stories to their own URLs, hoping to profit.

The author of these tales is Christopher Blair. His website, TheLastLineOfDefense.org, is among the biggest sources of fake news online. Blair operates under a series of pen names — Ezekiel Wilekenmeyer, Christopher Lyman, Stryker, Busta Troll — but PolitiFact, which has been debunking his stories for months, pieced together his true identity.

In a series of email and Facebook chat interviews, Blair discussed the details of his brand of political parody.

Blair, who insisted that every word in our interviews was true, says he designed his parody site to fool conservatives with fake stories most people would find absurd. He said his identity had been public for some time, but the media just couldn’t seem to get it right. He talked to us "to tell the whole story," he said.

Were all of his answers honest? Were any of them? Was he leading us astray, too, just to make us look bad if we get it wrong?

It’s hard to say. He invents stories for a living. 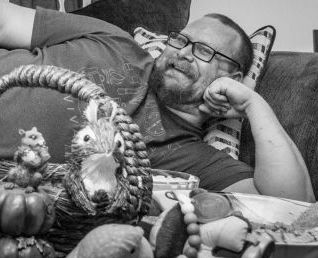 Since the 2016 election, we’ve debunked more than 100 stories that are either entirely made up or deliberately misleading.

Many of them have something in common: Blair.

Under the banner "America’s Last Line of Defense," his website’s About Us description said it is run by "a group of educated, God-fearing Christian conservative patriots who are tired of Obama’s tyrannical reign and ready to see a strong Republican take the White House."

In reality, the Last Line of Defense is run by one person, Blair, mostly under the pseudonym Stryker. He started with partners, he said, but he is currently the "only partner with a public face."

The site is a carefully curated social experiment, Blair said, designed to "feed the Hoverounders their daily need for hate and their undying urge to blame everything in the known universe on Hillary Clinton and Barack Obama."

The website does make clear its true purpose, saying it "is a satirical publication that uses the imagination of liberals to expose the extreme bigotry and hate and subsequent blind gullibility that festers in right-wing nutjobs."

"The good chunk of the population who believe aren't based in reality," Blair told PolitiFact. "They're the people who buy the National Enquirer. Tucker Carlson doesn't just get killed, he gets murdered by a blacked-out Ford Explorer." (We rated the Carlson story Pants On Fire).

Fake news websites in places like Albania and Macedonia steal Blair’s stories and repost them without credit. The sites are run by "a bunch of whiny teenagers," Blair said, noting that he has dealt with many sites by notifying service providers of the infringement and blocking some countries from accessing his site altogether.

Yes, a fake news author is concerned about plagiarism.

TheLastLineOfDefense.org’s articles often depend on simple subjects that evoke knee-jerk reactions. They can get quite elaborate.

One series of posts about conservative rocker Ted Nugent changed narratives three times. First, Nugent was killed in a hunting accident. Then, he was murdered. Then, he faked his own death.

"The strategy was to mess with conservatives," Blair told us in an email. "That's always the strategy."

The coup de grace came when the site posted another follow-up blaming a "libtard" blogger from AddictingInfo.com for coming up with the Ted Nugent hoax. Someone named Leonard Terwilliger-Smith, a.k.a. Les Truthful, was behind it all, the site said.

Of course, there is no such person. 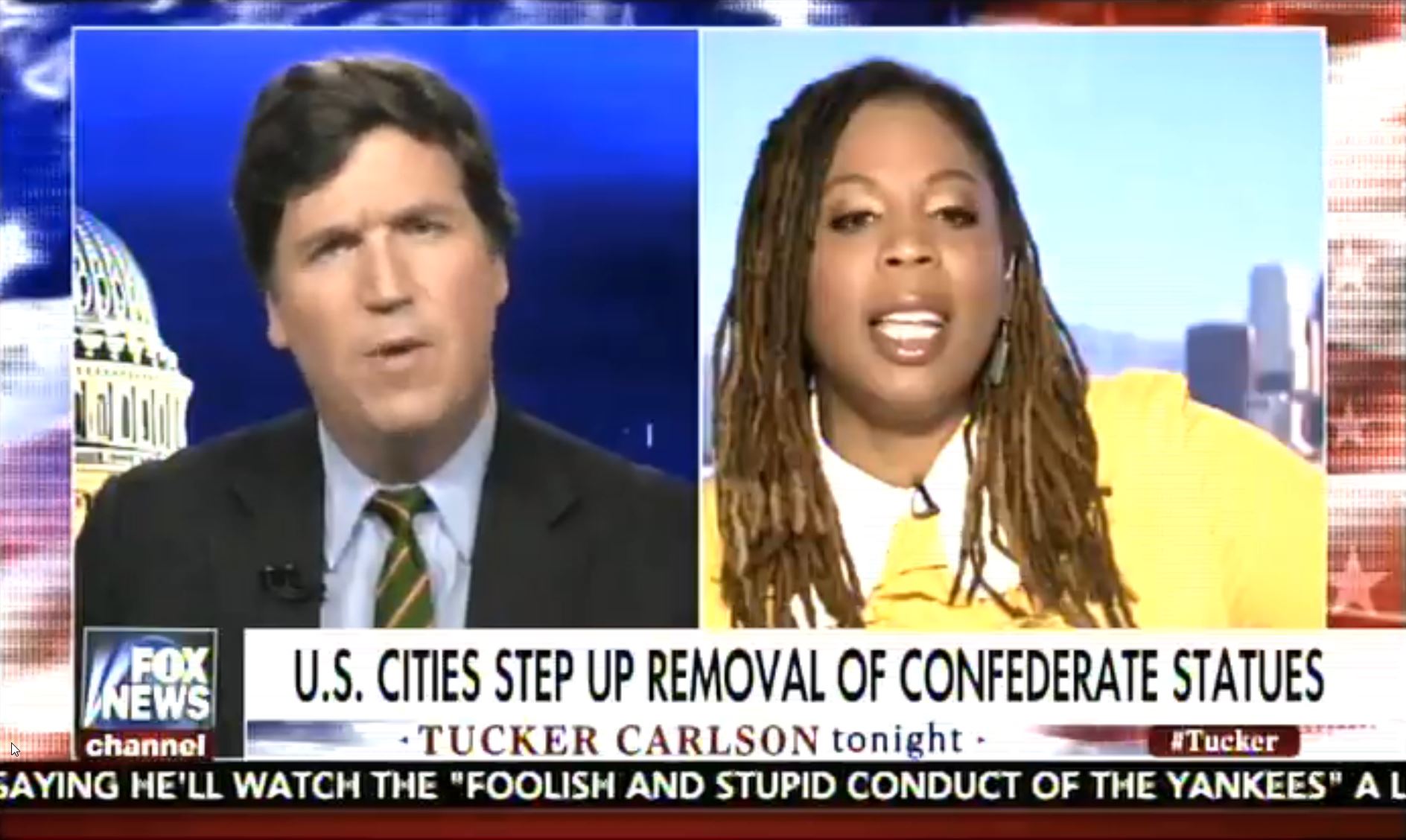 While Blair aimed to point out how gullible "hardcore, Trump-loving sheep" can be, he said TheLastLineOfDefense.org has a strong liberal following, too. He said the split between left and right is about equal, as many readers flock to his page to see what outlandish thing people might believe.

The traffic can be high, with more than 1 million views in a month, he said. The best he ever saw for a single post was when he published a fake story that called Florida for Trump on Election Day — at 3 p.m. in the afternoon, hours before polls closed.

The post telegraphed the extreme improbability of such a pronouncement in a presidential election, but still garnered 500,000 clicks, Blair said.

He added that awareness of fake news has kept any post from blowing up like that since. But even with his liberal fans and conservative marks, Blair said he didn’t believe he was swaying opinions or had altered election results in any way.

Blair likened his offerings to the audiences that believe the "left-wing lies" on other sites. "You’re not gonna change anyone’s mind," he said. He claimed that a thoughtful reader would know he’s serving up bogus stories.

"The average person searches Google, sees it isn't there, finds the about page link and immediately understands," he said.

"I keep seeing proprietors of supposedly satirical fake news websites using this excuse, but I know of no research to suggest it is accurate," Nyhan told us via email. "It seems more like a way to make the other side look bad and/or make money while spreading misinformation."

Michelle Amazeen, a Boston University mass communications professor, has been working on research that shows fake news sites can influence the types of stories that partisan news media covered.

Readers, too, are affected by a psychological phenomenon called the illusory truth effect, she said. If someone is repeatedly exposed to false information, they can eventually start to think it’s true, even if they know better.

A troll by any other name

Reliable information about Blair, or Busta Troll, or whatever name he may be using, is fragmented at best.

There were no references to anyone by that name in any government records database we consulted. There is a Twitter account in limbo, but Wilekenmeyer did not, as far as we could tell, exist in real life.

PolitiFact backtracked through Busta Troll’s online trail and looked up aliases associated with the character. When we found Blair on Facebook, we cross-referenced him on criminal databases and looked for him in property records. And even when he started talking to us online, we were wary enough to take his story with a grain of salt — because you can never be too sure about a troll.

Blair told us the Wilekenmeyer account belonged to him. Other outlets had previously reported TheLastLineOfDefense.org was run by a man named Christopher Lyman.

Blair uses his own characters to aid in his elaborate storylines, discrediting the very people he has made up. Lyman also was a fake name, devised during an elaborate 2014 scheme to reveal the identity of Busta Troll, an online persona known for "goating" conservative Facebook pages.

As Busta Troll, Blair would gain the trust of the Facebook page administrators, earn his own administrator privileges, then post scads of photos of goats, leading the victims to ultimately shut down the page.

This spawned an entire group of liberal trolls on Facebook that Blair called "the goat herd." An alleged conservative named Kevin Kopper offered a $1,000 bounty to find Busta Troll after Kopper said his Facebook page also had been hijacked. The money led to subsequent claims that Busta Troll was Christopher Lyman, a cabinetmaker from Orono, Maine, who umpired Little League games.

Except not only was Lyman a faux name and story, Kopper was entirely made up, too, the invention of another group of liberal bloggers that Blair would not identify. Busta Troll posted about it on his own page, admitting the yarn was faked. The subterfuge also was the subject of a 2015 YouTube video:

This video appeared on YouTube after an elaborate scheme to unmask Busta Troll as Christopher Lyman, which was another pseudonym.

Busta Troll was actually a name Blair said he started using in 2013, while writing real posts for Liberaland.com. He used it on AlanColmes.com in 2014 and 2015, and is now Busta Troll on another site he said he currently co-owns, GOPocalypse.com. (The Nugent saga and why he did it is chronicled on that site.)

He used the name Christopher Blair at AddictingInfo.com as recently as a year ago, and Blair said he wrote as both Blair and Charles Topher at AintItCoolNews.com until last fall. He also used the name Frank Wilekenmeyer, he said.

Facebook eventually shut down Busta Troll’s own page, leading Blair to adopt Busta Troll as a profile photo on Blair’s Facebook page, "so everyone would know who was giving them their hyperbole."

There are few details on Blair’s profile: A birth date of Dec. 19, 1971. A job description of "Paid Liberal Troll." A few family photos. He told PolitiFact that he actually is a volunteer Little League umpire at a small town in Maine, echoing a detail of his Lyman alias.

He does make money off his websites, he said, although it’s not the only way he makes a living. Facebook’s efforts to cut down on fake news, which PolitiFact is a part of, is effective for smaller websites that don’t carry disclaimers, he said. But he’s not worried about how it may affect him or his projects.

"I discovered that Facebook following plus blog plus ads equals income," Blair said.

He’s looking for future business opportunities, and is considering stepping outside the political realm next.

TownHall.com, "I Can Destroy Your Reputation and Career in Two Minutes," Sept 1, 2014

TheConversation.com, "Unbelievable news? Read it again and you might think it’s true," Dec. 5, 2016

TheLastLineOfDefense.org, "BREAKING: Infamous Liberal ‘Troll’ Sentenced To Life In Prison For Crimes Against The USA," Feb. 22, 2017

PunditFact, "Image of Obama in handcuffs for wiretapping Trump is fake photo," March 9, 2017

PunditFact, "Reports about Ted Nugent dying (or not) on hunting trip is convoluted hoax," May 1, 2017

TheLastLineOfDefense.org, "Tucker Carlson Death Hoax Admits Who Paid Him," May 14, 2017

Interviews with Christopher Blair, emails and Facebook chats, April 2-May 26, 2017