Kid Rock not running for U.S. Senate, but FEC must decide about campaign swag
By Joshua Gillin October 24, 2017

Despite previously saying he was serious about a new career in politics, musician Kid Rock told shock jock Howard Stern there was no way he was actually going to run for U.S. Senate.

Kid Rock, whose real name is Robert Ritchie, appeared to launch a bid for a seat from Michigan back in July. He said in an expletive-filled interview on Stern’s Sirius XM satellite radio show on Oct. 24, 2017, that he was never serious.

He noted that he had a new album coming out and was going on tour, so the ruse should have been obvious. Kid Rock said he heard a rumor he was going to run, so he decided, "let’s get some signs made."

His idea eventually fooled so many people, even his own staff would ask him if it was real, telling them, "No, we’re not doing it, but let’s roll with it for a little while," he said on Stern’s show.

The faux campaign led to the website KidRockForSenate.com, which offered a signup for email updates and a link to a "Kid Rock for U.S. Senate" web store run by Warner Bros. Records.

He drew more attention when he declared it was real in Facebook and Twitter posts directing people to a July 13 blog post on his website, in which he berated the media for suggesting he wasn’t following campaign finance laws.

Even PolitiFact wondered if it was real, when we fact-checked his post’s assertion that he had 15 days from announcing his candidacy to file paperwork with the Federal Election Commission. We rated that Half True.

It turns out that the FEC’s registration and reporting rules come into play after receiving or spending $5,000 on campaign activity, not just 15 days after an announcement. That means if a potential candidate rakes in $5,000 or more with the intent of running for office — say, by selling T-shirts through a web store and saying it’s for a political campaign — they’re on the hook for reporting it to the FEC.

On July 26, Kid Rock wrote in another blog post that he had plans for those profits.

"During this time while exploring my candidacy for U.S. Senate, I am creating a 501(c)(4) — a non-profit organization for the promotion of voter registration" at his concerts, he wrote. "Money raised at this time through the sale of merchandise associated with this very possible campaign will go towards our 'register to vote' efforts."

Items on the web store now carry the disclaimer, "All proceeds go to voter registration efforts. This is not a political contribution." 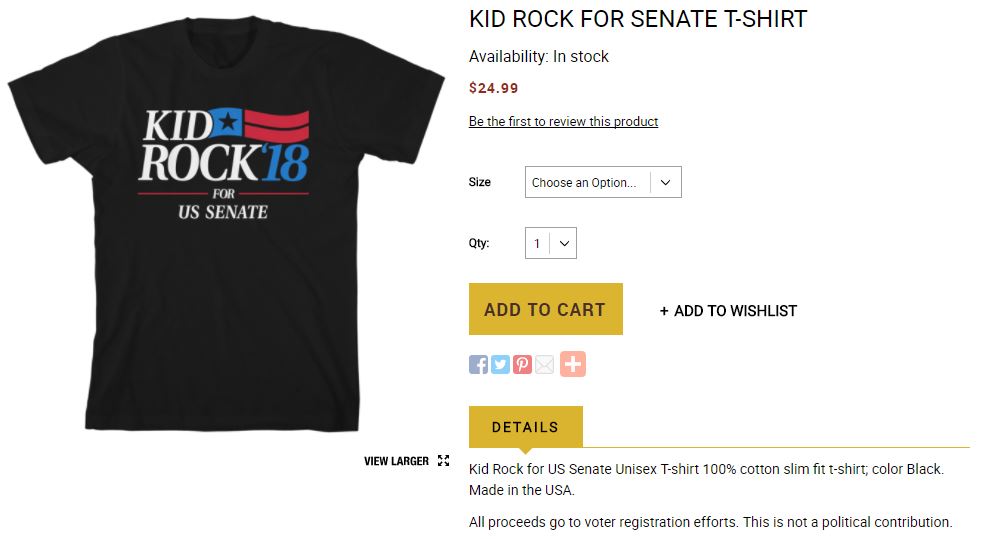 It’s unclear whether Kid Rock followed through with using the money for voter registration, although he has been known to give political speeches at his shows.

It would be easy for him to start a 501(c)(4) for that purpose, according to Adav Noti, the senior director for trial litigation and strategy at the Campaign Legal Center. But it would be difficult to tell if he had started a 501(c)(4) without knowing the name of the organization or where it was based.

We attempted to contact Kid Rock’s manager but didn’t hear back.

But because Kid Rock hedged about still possibly running for Senate, he kept the door open for having to follow FEC rules, Noti said.

But if he does decide to run, those reporting rules still apply.

Common Cause, a group focused on reforming elections and political spending, filed a complaint with the FEC on Sept. 1 about this very issue. The complaint alleged Kid Rock and Warner Bros. Records were breaking FEC rules and federal law "by facilitating and acting as a conduit for contributions to the Kid Rock campaign."

"I am starting to see reports from the misinformed press and the fake news on how I am in violation of breaking campaign law.

"#1 I have still not officially announced my candidacy.

Even if it turns out the whole campaign is a publicity stunt, as appears to be the case, Kid Rock will still have to respond to the complaint, Noti said. The musician’s response won’t be made public until the case is closed.

If Kid Rock tells the FEC it was a stunt and he was never serious, the agency may simply dismiss the case. If he starts a tax-exempt 501(c)(4), he’ll have to deal with the Internal Revenue Service.

But if by some stretch of the imagination he does end up running, he’ll have to report profits from the web store stretching back to July, regardless of any announcement, Noti said.

The FEC could take up to a year to decide to investigate in that scenario, Noti said. An investigation could take another year beyond that.