Cox made this bold claim in the headline of his July 3, 2018, press release: "Gavin Newsom separated families and deported children before he was against it."

"As usual Gavin Newsom wants it both ways. As San Francisco mayor, Newsom policy reported undocumented youth to ICE - he was for it before he was against it." 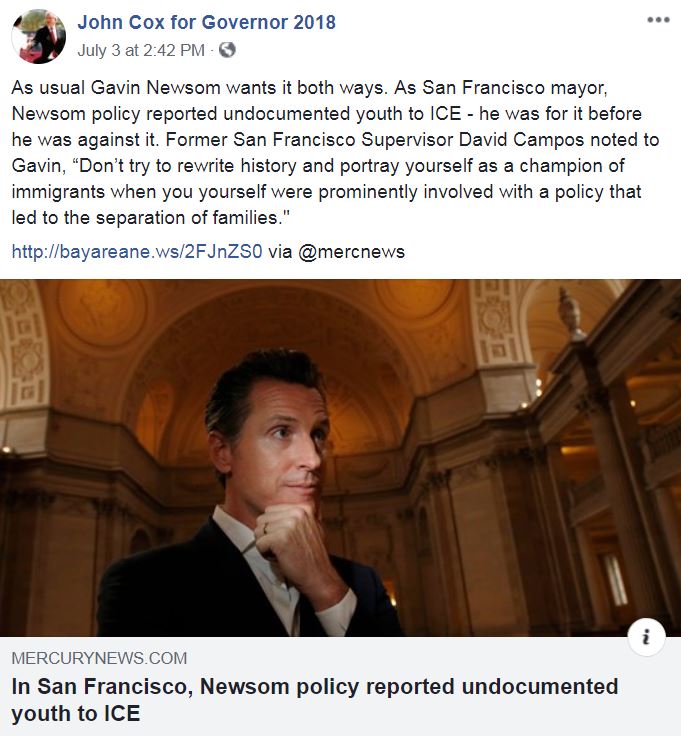 Cox made these charges after Newsom, at a late June rally in Los Angeles, sharply criticized the Trump administration for separating thousands of migrant families at the U.S.-Mexico border.

The part about Newsom opposing Trump’s approach is clearly correct.

But was Cox right about the rest? Did Newsom’s San Francisco policy separate families and deport children? And was it anything like Trump’s approach?

In July 2008, Newsom implemented a policy that referred undocumented youth arrested for felony crimes in San Francisco to U.S. Immigration and Customs Enforcement. The city had previously reported to ICE only undocumented adults charged with felonies.

When asked to support Cox’s statements, spokesman Matt Shupe pointed to news reports, including a 2009 New York Times article that said the policy led to dozens of juveniles being placed in deportation proceedings.

"It was a pretty drastic change," said Angela Chan, a San Francisco immigration attorney who represented a family whose 13-year-old son was referred to ICE, said in an interview with PolitiFact California. "Prior to that point, the focus was on rehabilitation and on the appropriate placement of the child and also on reunification with the family."

She said "dozens" of juveniles between the ages of 12 and 18 were reported to ICE each month, both on felony and misdemeanor charges. Chan added that the San Francisco board of supervisors passed an ordinance in 2009 overturning much of Newsom’s policy, but Newsom refused to implement it.

"Some kids were actually deported as a result of that policy," she said.

Chan said the 13-year-old she represented was nearly deported for punching a classmate and stealing 46 cents. She said her legal efforts blocked the deportation.

Newsom imposed this strategy after a June 2008 slaying of a father and his two sons by Edwin Ramos, an undocumented man and gang member from El Salvador, according to news reports. Ramos had previously served juvenile probation in the city for violent crimes but had not been deported. He was convicted on three counts of murder in 2012.

Newsom was criticized by San Francisco leaders and immigrant rights groups after he enacted what was considered a harsh policy.

"We went from being one of the more progressive counties in the country to probably one of the least, and the most draconian," Abigail Trillin, then-managing attorney with Legal Services for Children, a nonprofit legal group, told The New York Times in 2009. "It’s been a total turnaround."

Representatives for the nonprofit could not be reached for this article.

As mayor, Newsom defended the policy, saying many of the youth his administration reported to ICE had committed serious crimes.

"A lot of them have histories; a lot of them are second, third chances," he told The Times in 2009. "This is not as touchy-feely as some people may want to make it."

News articles show Newsom’s administration reported to ICE more than just those booked in jail. It also reported 372 suspected undocumented immigrants in the city’s probation database to the federal agency, according to emails reviewed by the Mercury-News for a March 2018 article.

'Doesn't equate with what's going on at the border'

"Don’t try to rewrite history and portray yourself as a champion of immigrants when you yourself were prominently involved with a policy that led to the separation of families," Campos said.

Campos, who is now chairperson of the San Francisco Democratic Party, added in an interview with PolitiFact California that Newsom should acknowledge the flaws of his past actions.

He said, however, that Cox is in no place to criticize Newsom on immigration, given Cox’s support for Trump.

"As bad as [Newsom’s policy] was," Campos said, "it doesn’t equate with what’s going on at the border."

In a written statement, Newsom’s campaign spokesman Nathan Click rejected the idea that the former mayor’s policy was anything like Trump’s. It did not address the details of his mayoral administration’s referrals to ICE.

"As Mayor, Gavin Newsom protected and promoted San Francisco's sanctuary policy and was a national leader fighting for the rights of undocumented immigrants," the statement said. "It’s the height of Trumpian dishonesty for Cox, an unabashed Trump supporter and backer of this president's cruel and inhumane immigration policies, to falsely compare Gavin Newsom’s nationally-recognized defense of San Francisco’s sanctuary policy with Trump's unconscionable family separation and zero-tolerance policy, which experts agree constitutes one of the worst state-sanctioned human rights committed by Americans in generations."

Fallout from that policy continues as the majority of what the Trump administration has said was "fewer than 3,000" children remain separated from their parents. About 520 had been reunited as of early July, according to data tracked by The Washington Post.

This week, however, the Trump administration failed to meet a court imposed deadline to reunite all of the youngest of the children with their families.

News reports show Newsom’s policy separated undocumented youth charged with felonies from their families. Some were even deported, according to a San Francisco attorney who represented immigrant families.

To a degree, this supports Cox’s statements. It shows Newsom imposed a policy that’s far more severe than the ones he advocates for today.

But what Cox failed to say is that the scale, circumstances and details of the policies are much different.

Trump’s policy this spring led to the separation of thousands of families who entered the country illegally, or in some cases attempted to seek legal asylum.

Crossing the border illegally, at least the first time, is considered a misdemeanor.

Newsom’s policy in 2008 was aimed at undocumented youth already in the country arrested on felony charges. Some arrested on lesser charges were also referred to ICE.

There’s also no evidence Newsom’s policy affected children as young as the toddlers and babies separated by the Trump administration.

Cox’s statements did shed light on Newsom’s use of an immigration strategy that strays significantly from the more liberal stances he champions today. But, in the end, we also found his claims lack context and unfairly conflate Newsom’s policy with Trump’s, despite some stark differences in detail and circumstance. 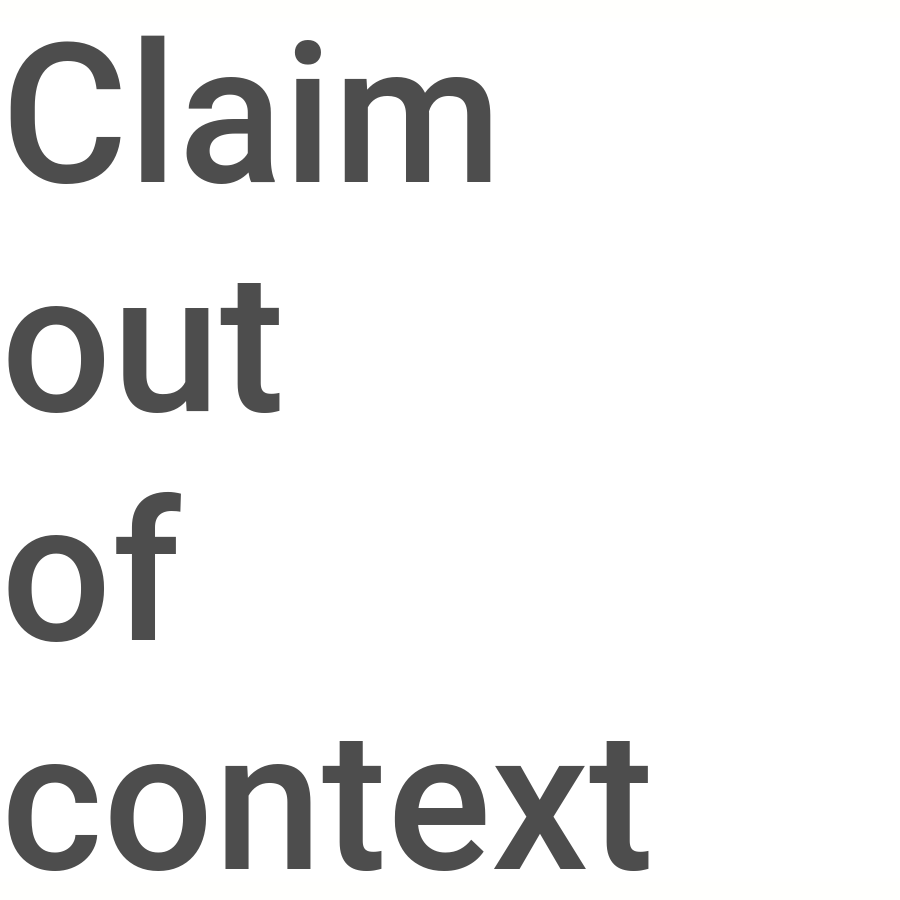 PolitiFact Rating:
Claim out of context
"Gavin Newsom separated families and deported children before he was against it."
John Cox
Candidate for California governor

The Washington Post, The children separated from their parents, by the numbers, July 9, 2018