Among the outcomes of President Donald Trump’s summit with Kim Jong Un was a video of cinematic proportions.

Trump showed a four-minute video to journalists in the Singapore press conference, who initially mistook it as North Korean propaganda. As it turns out, it was made in the USA.

The video plays like a low-budget movie trailer, depicting two epic heroes, Trump and Kim, on whom one choice falls: world peace or annihilation. North Korea resembles paradise, shown through a montage of glowing sunrises, sprawling meadows and glittering skylines, interspersed with vintage war footage of missiles and soldiers.

There are some galloping horses and images of Machu Picchu sprinkled in there, too. 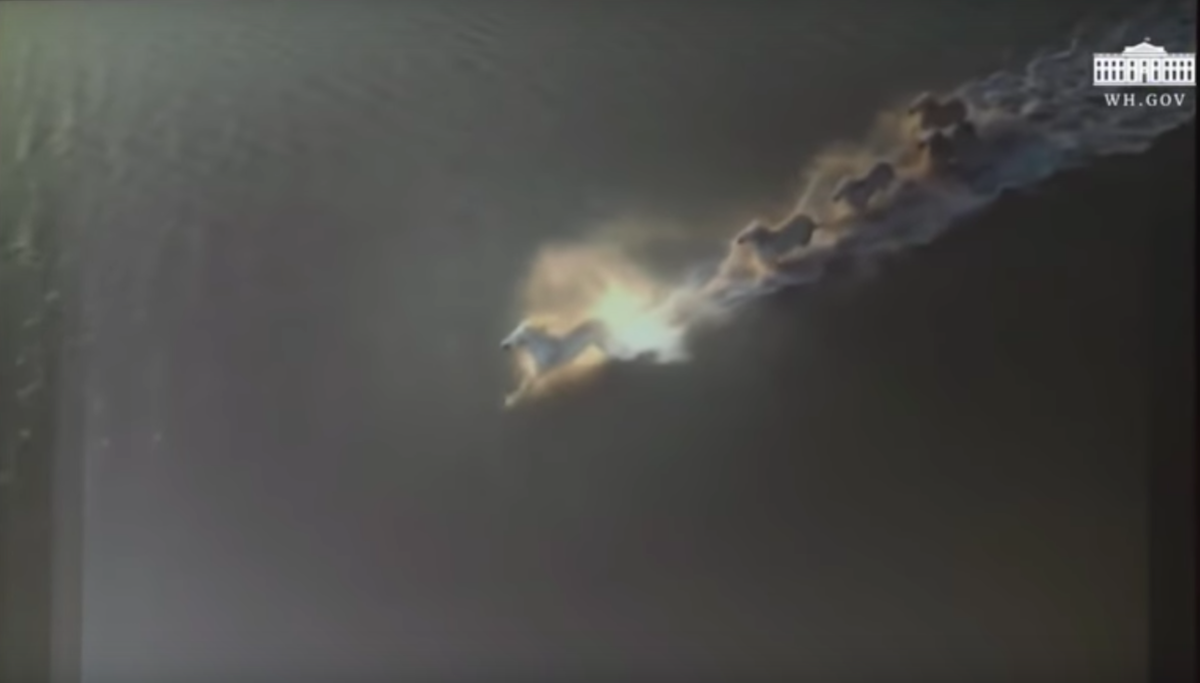 Trump told reporters he showed the video to Kim toward the end of their meeting:

"And I think he loved it. They were giving — we didn’t have a big screen like you have the luxury of having. We didn’t need it because we had it on a cassette and — an iPad. And they played it. And about eight of their representatives were watching it, and I thought they were fascinated."

So were we. We had a lot of questions about the video, so we started looking into who made it, why it was produced, and whether anything like this had ever happened before.

We were surprised to learn there used to be an agency dedicated to doing this sort of thing.

Destiny Pictures: It wasn’t our video

"This is Mark @DestinyPictures. We had nothing to do with Singapore video. Woke up to 100's of e-mails and calls from all over the world. Crazy--  Call?" Mark Castaldo, the studio owner, tweeted.

A disclaimer on the website also reads, "Destiny Pictures Had No Involvement In President Trump NK Summit Video."

"I think that whoever made the video just used/ inserted ‘destiny’ metaphorically and used it," Castaldo told Time.

So who was responsible? The U.S. government. Specifically, the National Security Council. The White House-run office created the montage "to help the president demonstrate the benefits of complete denuclearization, and a vision of a peaceful and prosperous Korean peninsula," NSC spokesman Garrett Marquis said in a statement.

Nicholas Cull, a professor of public diplomacy at USC Annenberg School for Communication and Journalism, said the NSC likely contracted production out to a small production agency or a friendly video editor.

Neither the White House nor National Security Council responded to our request for more information.

You’d have to go back several U.S. presidents to find anything like this kind of film diplomacy.

Cull wrote two books about the agency that used to make videos for diplomatic purposes.

The U.S. Information Agency, which fell under the State Department, produced videos for policy objectives from 1953 to 1999, when Congress cut its funding. At one point, they counted George Lucas among their editors.

"This movie is an example of amateur hour. It makes you really nostalgic to when you had Oscar-winning people on call — those were the days," Cull said.

The videos were sometimes shown in a diplomatic context like this one.

For example, the agency produced a video that included intercepted dialogue from the Soviet pilots who shot down Korean Air Lines Flight 007 in 1983, a flight from Anchorage to Seoul that flew through Soviet-prohibited airspace. The footage was shown to the United Nations and prompted an important vote against Russia.

Following the Iraqi invasion of Kuwait in 1990, the agency created a film called "A Line in the Sand" to show the strength of the allied forces assembled to liberate Kuwait in the hope that Saddam Hussein would compromise.

"The video was made for an audience of one," Cull said. "I interviewed the American official who passed it to the Iraqi ambassador. He said the man took it as one might 'a fresh turd.' "

Past presidents have also presented cassettes to foreign leaders.

On the eve of one of their summits, former President Ronald Reagan gave Soviet Premier Mikhail Gorbachev a videotape of "Friendly Persuasion," a Hollywood film about a Quaker who doesn’t want to fight in the American Civil War. The gift was meant to show Americans’ love for peace while arguing that even the most peace-loving people are willing to go to war, Cull said.

Matthew Wallin, fellow for public diplomacy at the American Security Project, had a hard time recalling a more recent precedent.

"Other administrations have certainly used videos for a variety of purposes, but usually it’s stuff surrounding the personality of the president to humanize them," Wallin said. "The Obama administration put together all sorts of selfie-style videos, the Bush administration used to put out videos in the life of their dog, Barney. This type of video is intended perhaps less to humanize but create an epic figure, hence the epic music."

First, the video takes a clear "Great Man" approach to international relations and history. Like any hero in a movie or film, the story becomes only about individual wills in conflict, foregoing all the subtleties of history, macroeconomics, race, culture and diplomacy. 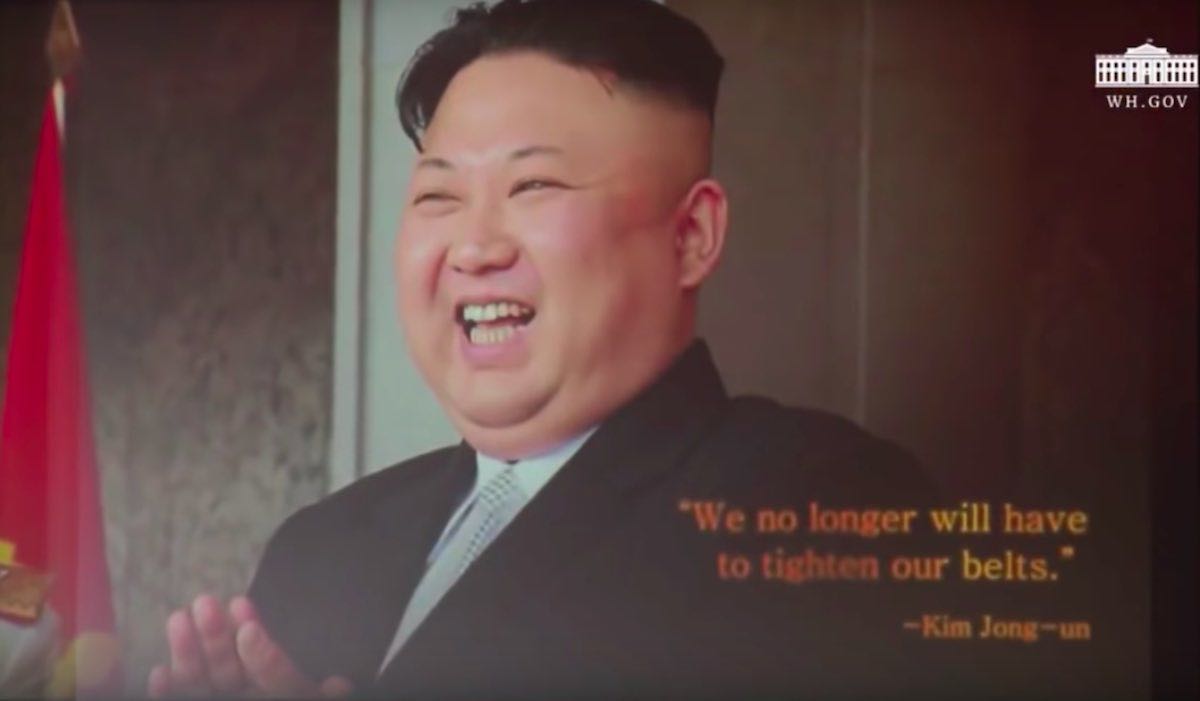 The video posits an either/or fallacy that is typical of propaganda.

"Either Kim Jong Un agrees to work with Trump and open up his country, or there will be war," Barclay said. "Of course there are a whole range of possibilities other than those two extremes, but propagandists like to boil things down to simple choices."

The video even includes images taken from North Korean propaganda, according to Cull.

The video recalls Trump’s own fascination with Hollywood. But Tom Hollihan, political communications professor at the University of Southern California, said it might call on the administration’s hypothesis that Kim is into it, too.

"Obviously someone gave the White House information that suggested that Kim Jong Un, like his father, was fascinated by American popular culture," Hollihan said. "They thus built a story arc around the idea that this would be his opportunity not only to improve conditions for his people but that by doing so he could himself become a global celebrity and a heroic persona."

Wallin was doubtful the video would have success.

"When you’re going into a high-stakes negotiation like this, it seems clear to me that both parties know what’s at stake and have a basic understanding of what the options are," Wallin said. "So it came off as strange to me that the Trump administration found it needed to dumb this down into a movie trailer."

Cull, however, said its success lies in the eye of the beholder.

"It may seem odd to us, but we were not the intended audience," Cull said. "It was meant to be the advisers around Kim and Kim himself, and we do not know whether this was a success or failure until we know what they thought. If they were impressed, it was a success." 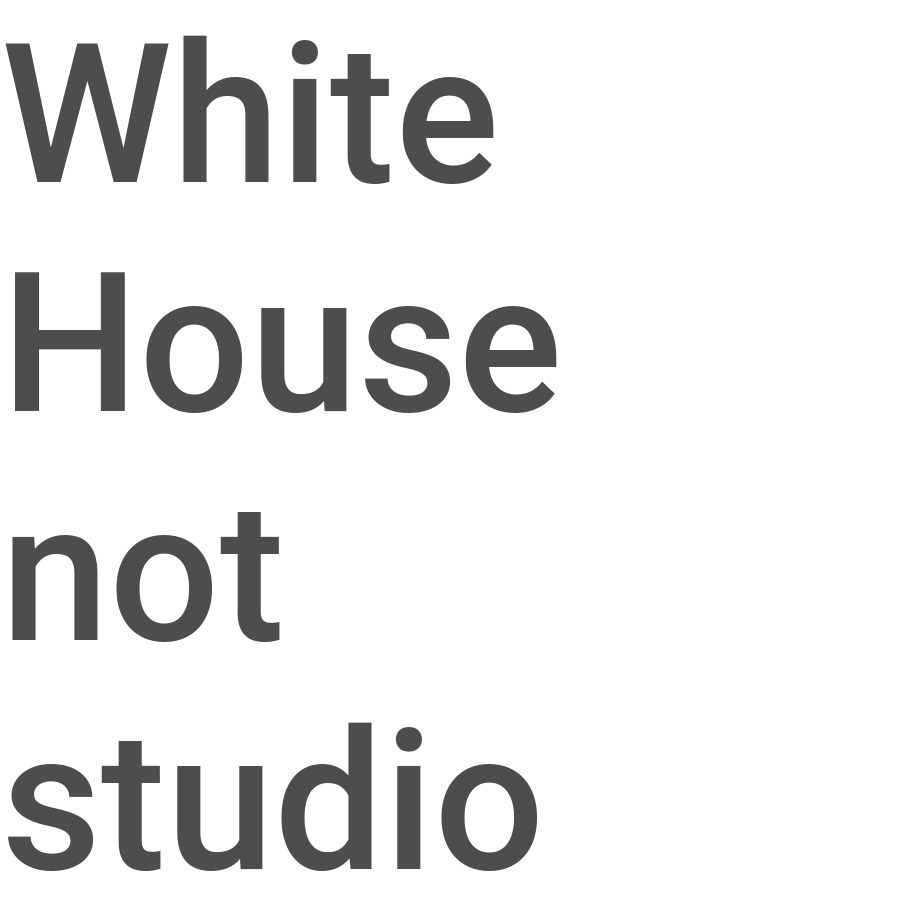