What Bernie Sanders has said about the Democrats over the years

Bernie Sanders takes the oath of office to become the mayor of Vermont's largest city, Burlington, on April 6, 1981. (AP)

The 2020 presidential nominating contest is shaping up as a battle between the progressive and moderate wings of the Democratic Party. But leading the charge on the progressive side is a candidate who has for decades publicly distanced himself from the party.

Although he caucuses with the Democrats in the Senate, and is running to be the party’s standard-bearer heading into the November election, Bernie Sanders is still officially an independent in Congress.

RELATED: How Sanders qualified to run as a Democrat for the presidential race

And for most of a long political career that goes back to 1972, he has not only proclaimed his independence, but also voiced pointed skepticism of the Democratic Party.

How does he really feel? We rounded up 11 quotes from various points in Sanders’ career about his own party identification — starting with the left-wing Liberty Union Party — and what he thinks of the Democratic Party.

1977, to the Associated Press, upon leaving the Liberty Union Party to become an independent:

The Liberty Union Party "certainly has not gone as far as I wanted it go to, and in that sense it's a failure."

"I am not now, nor have I ever been, a liberal Democrat."

1986, to a Cornell student writing a master’s thesis, during Sanders’ run for governor against a Democratic incumbent:

The Democratic Party is "ideologically bankrupt. … They have no ideology. Their ideology is opportunism."

"In Burlington we have a three-party system – Progressive, Republicans and Democrats — and that I think we are doing many good things for working people, poor people and elderly people in our community."

1988, discussing his support for Jesse Jackson in that year’s Democratic presidential primaries: 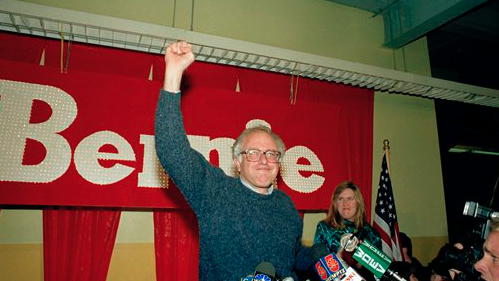 Bernie Sanders raises his arms in victory after winning the race for Vermont's lone House seat on Nov. 6, 1990. (AP)

1991, to the Associated Press, a few months after winning election to the U.S. House:

"I am extremely proud to be an independent. The fact that I am not a Democrat gives me the freedom to speak out on the floor of the House, to vote against both the Democratic and Republican proposals."

2013, in an interview with the Progressive: 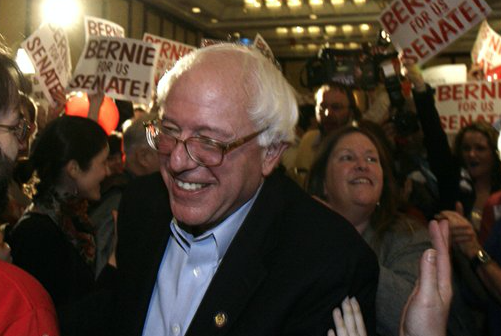 Bernie Sanders walks through the crowd as he celebrates his victory in the U.S. Senate race in Burlington, Vt., on Nov. 7, 2006.

"What we have today is, I think, a Republican Party which has moved from a center-right party over the last decades to a right-wing extremist party. I think you have a Democratic Party which is not as strong as it should be in standing up for the working class of this country and taking on big-money interests. And that’s been my view for a long time."

2016, in a presidential town hall in New Hampshire, after being asked, "In your heart are you a Democrat?":

2019, on a form required by the Democratic National Committee of all Democratic presidential candidates:

"I am a member of the Democratic Party. I will run a Democrat, accept the nomination of my Party, and I will serve as a Democrat if elected."

PolitiFact, "How Bernie Sanders runs in the Democratic primary when he’s an independent in the Senate," March 2, 2020

Bernie Sanders, interview with the Progressive, 2013 (accessed via Nexis)