Americans entered 2021 after a tumultuous post-election season filled with lawsuits and falsehoods about the 2020 election. Just six days into the new year, as the nation prepared to pass the baton from President Donald Trump to Joe Biden, we saw an unprecedented attack on the U.S. Capitol.

Statements about the Jan. 6 Capitol attack and Biden’s efforts to help the country recover from a pandemic fueled much of the political conversation in 2021. We fact-checked many claims about COVID-19, including about vaccines, as well as about immigration and the economy.

While PolitiFact every year selects the Lie of the Year, we also wanted to highlight fact-checks that drew the most readership.

We found that the 10 highest-read fact-checks were of statements found through our partnership with Facebook to debunk misinformation. Most of them were on the false side of our Truth-O-Meter, although two were Half True.

With that, here’s PolitiFact’s countdown to the most popular fact-check of 2021.

The Treasury made no such declaration. The department made a proposal to Congress which at the time said that banks would have to annually report the total inflows and outflows from  accounts, if the total was at least $600 in a year, or if the account’s value is at least $600. (The Treasury Department later raised the proposed threshold to $10,000, but this provision didn’t make it into law.)

Claim: A man who stormed the U.S. Capitol in a horned fur cap is an "Antifa thug." – Facebook posts

The man, Jacob Anthony Chansley, is a known QAnon supporter who has backed Trump. He did not have antifa ties.  Chansley led rioters through the Capitol using his bullhorn and ignoring orders from police officers, according to court records. He scaled the Senate dais and took Vice President Mike Pence’s seat and wrote on a notice that Pence was a "f—ing traitor" and "it's Only A Matter Of Time. Justice Is Coming!" On Jan. 7, Chansley called the FBI and told an agent that he came to D.C with other "patriots" from Arizona at the request of Trump. ​​In November, Chansley was sentenced to 41 months in prison.

Claim: Says Luc Montagnier said, "There is no hope and no possible treatment for those who have been vaccinated already. We must be prepared to incinerate the bodies." – Viral image

We couldn’t find any evidence that Montagnier, a French virologist who shared the Nobel Prize in Medicine for his role in discovering HIV, made the statement that appears in the Facebook post. There are no credible sources corroborating this online, nor any news coverage reporting on the scientist’s claims.

7. Why Haitians are crossing into the U.S. in Texas, and not somewhere closer 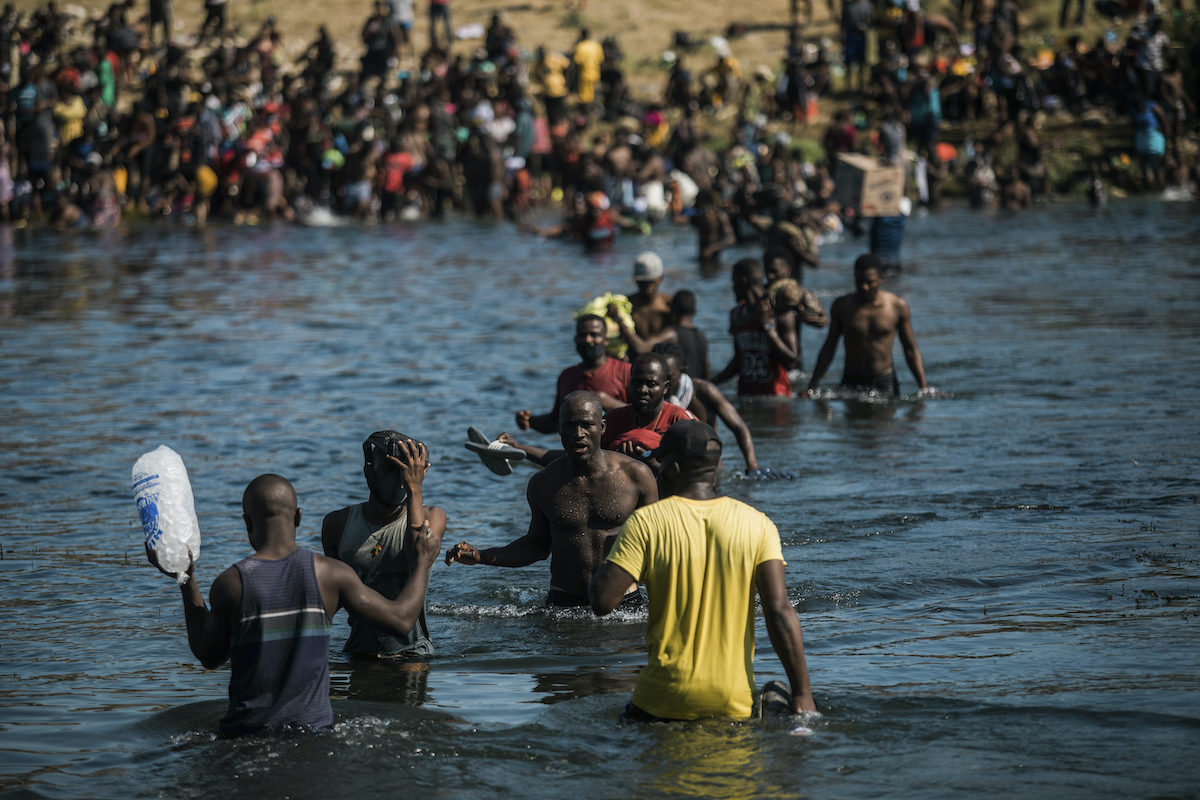 Migrants, many from Haiti, wade across the Rio Grande from Del Rio, Texas, to return to Mexico, Sept. 20, 2021, to avoid deportation from the U.S. (AP)
Claim: Haitian migrants took an implausible route to Texas-Mexico border area. – Facebook posts
Rating: Mostly False.
The Haitians who arrived in Texas did not take a direct route from Haiti. They left their country following the 2010 earthquake and went to South America to find jobs in Brazil and Chile. When opportunities dried up in those countries and conditions worsened, they began traveling north through Latin America toward Mexico.
6. Kyle Rittenhouse’s mother did not bring him to a Kenosha riot armed with a rifle

Claim: Kyle Rittenhouse’s mother "drove him across state lines and dropped him off in the middle of a riot armed with an assault rifle" in Kenosha. – Viral image

Rating: False
There is no evidence that Rittenhouse’s mother took him to Kenosha. The evidence is that Rittenhouse went on his own from his Illinois home to Kenosha, and that he retrieved the rifle he used in the shootings, which had been purchased by his friend, from the Kenosha home of the friend’s stepfather.
5. Keystone XL suspension probably won’t boost oil prices for Americans

Claim: Says President Joe Biden’s order stopping the Keystone pipeline "made oil more expensive for us to use." – Facebook posts

We found no evidence to support the claim that Biden’s order has made oil more expensive for consumers. Spot market prices for benchmark products fell slightly in the days after he issued the order on Jan. 20, his first day in office.

4. Be careful, getting fired over a vaccine mandate may cost you unemployment aid

Claim: "If your employer is mandating any pokes, do not quit. Make them fire you. That way you get unemployment benefits." – Facebook posts

Rating: False
Unemployment benefits are not guaranteed to people who get fired for refusing to comply with a company’s vaccine requirements. On the contrary, legal experts said that while state guidelines vary, it’s more likely that a worker in that situation would be denied such benefits for violating company policy.
3. How Biden’s Keystone XL pipeline executive order affects American jobs

Rating: Half True
That number is an estimate, and the claim lacks context about the longevity of Keystone jobs. TC Energy Corp., the Canadian company that owns the Keystone XL pipeline with the Alberta government, said more than 1,000 people were out of work because of Biden’s executive order signed in January. TC Energy estimated in 2020 that the pipeline would employ 11,000 Americans in 2021, but the majority of those jobs would have been temporary. A 2014 report found that the company would need only 50 employees to maintain the Keystone XL pipeline once it’s finished, 35 of them permanent.
2. Quotes by 4 Democrats twisted to make it look like they endorsed riots

Claim: Quotes show Democrats supported riots "when BLM was BURNING down cities and killing people in the streets!" – Facebook posts

Rating: Mostly False
Some of the quotes are legitimate, and were made during or around the height of the Black Lives Matter protests over the summer of 2020. Some statements received backlash, but none specifically indicated that they meant anything besides peaceful protest. Sen. Kamala Harris, in particular, condemned violent rioters and said she supported peaceful protesters during the summer of 2020. Other comments were made years ago and were not referring to any looting or violent civil unrest that occurred in 2020.
1. Yes, prices are higher under Biden, but recovery from the pandemic is key reason

Claim: Lumber, gas, wheat, coal and corn cost more in April 2021 "in Joe Biden's America" than they did a year earlier. – Facebook posts

Prices for lumber, gas, wheat, coal and corn were sharply higher in April 2021, about three months after Joe Biden became president, than they were in April 2020. The main reason was the nation’s recovery from the COVID-19 pandemic. In April 2020, the pandemic all but shuttered the economy and depressed prices across the board.

Mitch McConnell
stated on January 19, 2022 in a Senate hearing:
The Freedom to Vote Act is “a sprawling takeover of our whole political system.”