Members of the U.S. Secret Service Counter Assault Team walk through the Rotunda as they and other federal police forces responded as violent protesters loyal to President Donald Trump stormed the U.S. Capitol. (AP Images)

Asm. Randy Voepel, who represents communities in eastern San Diego County, defended the insurrection as an effort to push back "against tyranny," before later abandoning that position.

"This is Lexington and Concord. First shots fired against tyranny," Voepel told the San Diego Union-Tribune in a news article published Jan. 9. "Tyranny will follow in the aftermath of the Biden swear in on January 20th."

He made the comments days after the Jan. 6 insurrection which left five people dead, including a U.S. Capitol police officer. Since then, many have called to  impeach President Donald Trump for his role in encouraging his supporters to march on the Capitol and "take back our country."

"In response to a quotation I made to a local newspaper, I would like to follow up to state clearly and unequivocally I do not condone or support the violence and lawlessness that took place on Wednesday, Jan. 6, at our nation’s capital," Voepel’s statement read. "The loss of life, theft of government property, and blatant disregard for law and order is reprehensible and unnecessary, and I offer my prayers and condolences for the families reeling from the recent loss of their loved ones."

"The events that took place last Wednesday, as unacceptable as they were, are a sign of the deep division currently facing our nation," he continued. "That is why it is especially important that each of us work extra hard to heal the divisions between us."

Katie Talbot, a spokesperson for Assembly Speaker Anthony Rendon (D – Los Angeles) declined to say whether Voepel will face any consequences. In a written statement, Rendon called on all members of the chamber "to avoid inflaming passions."

"I would instead ask people — Members and their constituents — to be vigilant to protect our Constitution," the statement continued. "We need broad public involvement to counter those who weaken democracy with brute force and lies."

According to reporting from the Associated Press, lawmakers from at least seven states traveled to Washington D.C. to take part in the demonstrations, which are rooted in the baseless conspiracy theory that Joe Biden stole the presidential election. None were identified as California lawmakers.

Ashli E. Babbitt, 35, a San Diego woman and ardent Trump supporter, was shot and killed by an officer after she broke into the U.S. Capitol and then climbed up toward a broken section of an interior doorway that rioters were trying to breach.

On the day of the riots, Phil Reynolds, an elected member of the Santa Clara County Republican party, took to Facebook to say "The war has begun! Citizens take arms!" 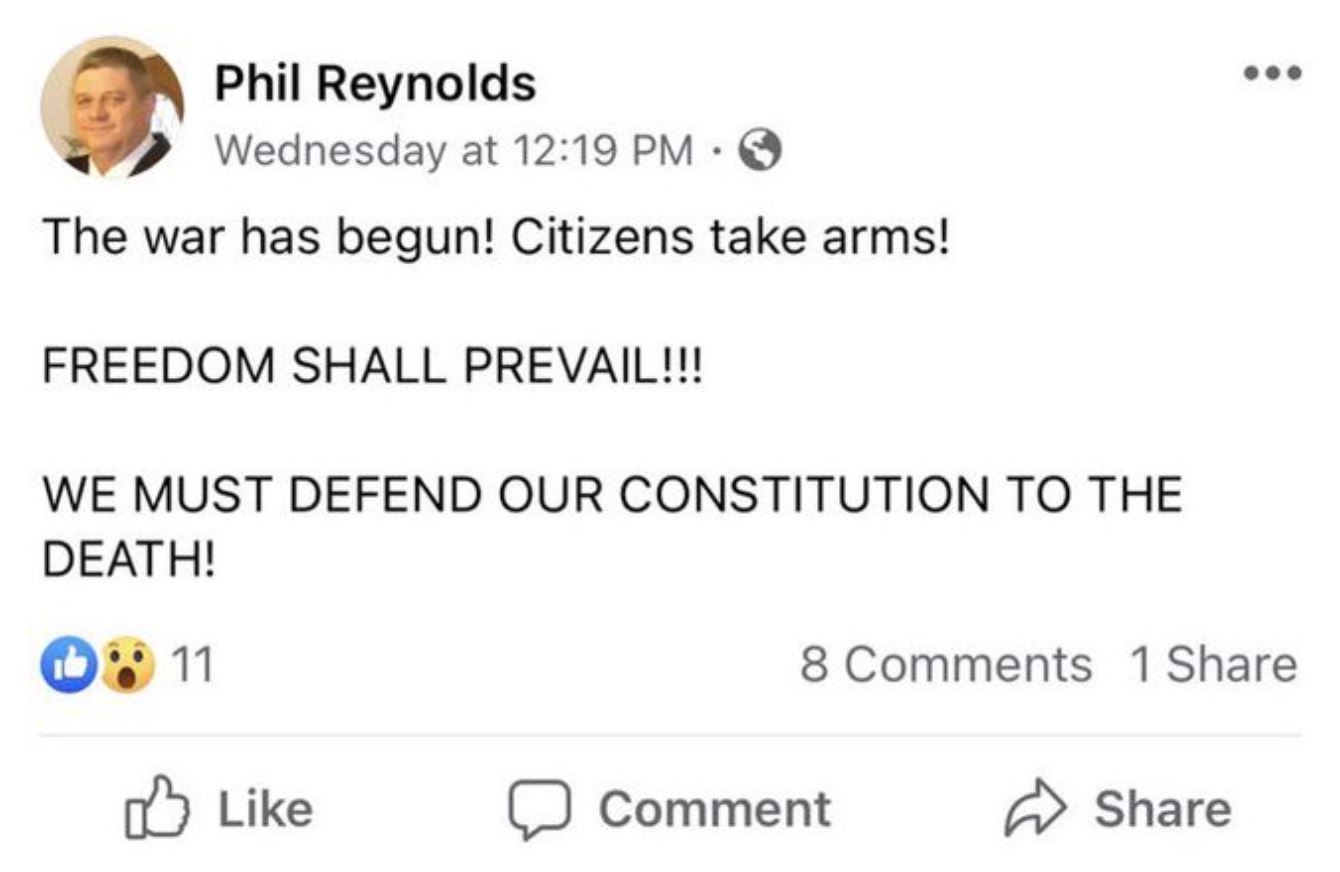 Those comments led to calls for Reynolds to resign, but the GOP party official told ABC7 News Bay Area that he has no plans to do so.

"I’m not going to retract my comments," Reynolds said. "They were not anything derogatory toward any individual. They were not inciting violence."

The county GOP party did not respond to questions about whether it plans to sanction Reynolds, who could not be reached for comment. In a Facebook post on Jan. 9, the local party released the following:

"The Santa Clara County Republican Central Committee categorically repudiates those who call for and participate in efforts to foment political violence or mob rule," the post read. "We are a Republic that works its problems out through discourse, laws, elections, and constitutional processes. Violence has no place in that environment."

Wesley Hussey, a Sacramento State University political science professor, said comments like those made by Voepel and Reynolds are politically damaging even in very Republican parts of California.

"Both cases are going to be a problem for Republicans," he said.

Hours after the deadly attack on the U.S. Capitol building, more than 100 Republicans in Congress, including seven from California, objected to certifying the electoral votes from Arizona and Pennsylvania. Supporters of the president allege election fraud and irregularities in the two swing states, despite a lack of evidence and legal challenges that went nowhere.

San Diego Union-Tribune, The Capitol siege was far from San Diego. Its fringe ideologies were right at home, Jan. 9, 2021