President Joe Biden and first lady Jill Biden wave as they arrive at the North Portico of the White House, Jan. 20, 2021. (AP)

Before becoming president, Joe Biden campaigned on a promise to undo much of the Trump administration’s changes to the U.S. immigration system, and to offer a path to citizenship for an estimated 11 million people living illegally in the United States.

Biden can achieve some of his immigration promises unilaterally, using executive power as President Donald Trump did. But other goals will require cooperation from Congress. Among them, granting citizenship to millions of immigrants and getting $4 billion to address the root causes that drive Central Americans to the United States.

Giving legal immigration status to so-called Dreamers, immigrants illegally in the country who arrived when they were children, is likely to be less controversial. Congress and the public have expressed wide support. But attempting to grant equal relief to a larger population of immigrants is expected to be more contentious, even when Democrats control both the Senate and House of Representatives.

Given the ongoing coronavirus pandemic and the ailing economy, comprehensive legal changes to the immigration system could take a backseat at least for Biden’s first year, said Veronica Vargas Stidvent, executive director of the University of Texas Center for Women in Law and a former special assistant for policy to President George W. Bush.

"Immigration reform tends to be on the backburner when the economy retracts," Stidvent said.

On his first day in office, Biden issued a proclamation to fulfill his promise to end Trump’s policy barring nationals of several Muslim-majority countries from entering the United States.

Biden’s administration also has the discretion to end Trump’s "zero tolerance" policy. The policy, formally announced by then-Attorney General Jeff Sessions in 2018, referred for prosecution all adults who illegally entered the country. That policy led to the separation of thousands of children from their parents as they arrived at the southwest border.

Another area of the U.S. immigration system that dramatically changed under Trump is the refugee resettlement program. Trump used executive power to reduce the refugee admissions ceiling every year he was in office. He ordered that no more than 15,000 refugees be let into the country in fiscal year 2021, the lowest cap ever set by a president in the refugee program’s four decade history.

Biden similarly can use his executive power to raise the refugee admissions cap. He has proposed increasing the annual admissions ceiling to 125,000, and higher over time. But Stidvent said that actually getting that many refugees into the country could be challenging due to a lack of remaining infrastructure.

Many refugee resettlement agencies have closed or downsized programs and services. The federal government would also need to build back the personnel and resources it needs to handle an influx of refugee arrivals, Stidvent said. 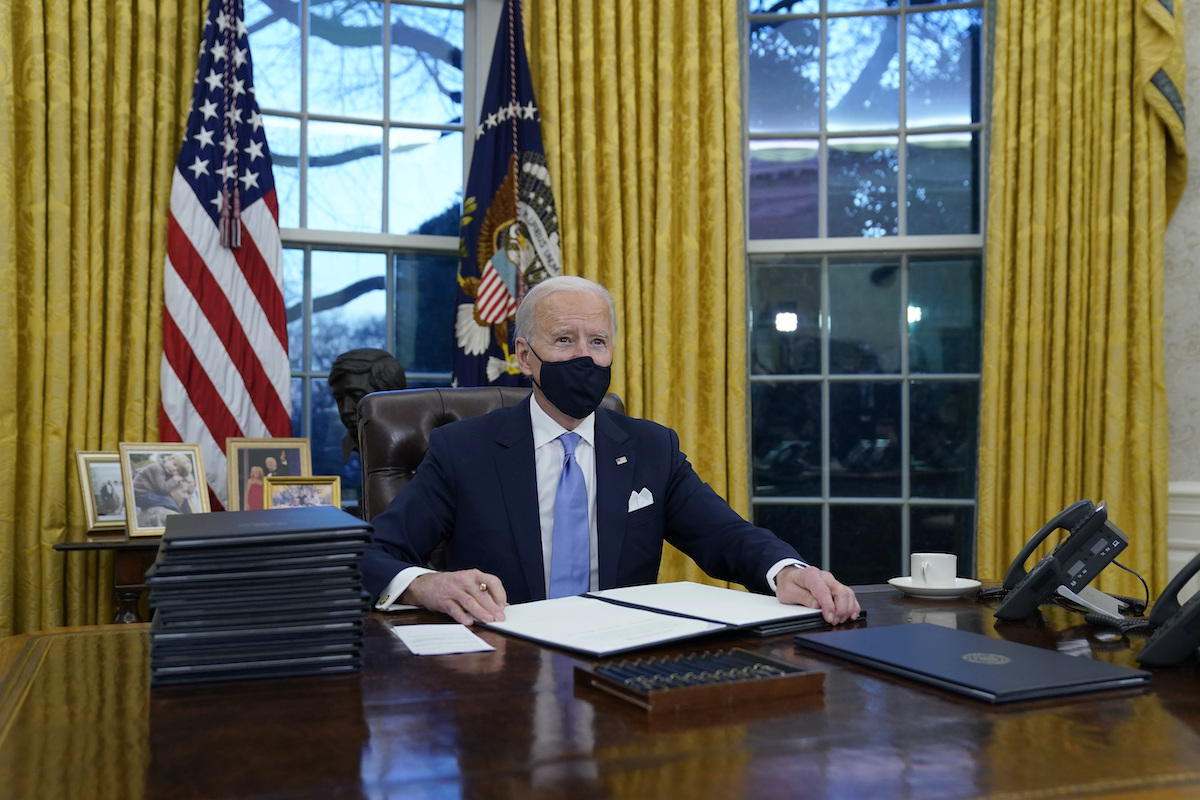 President Joe Biden looks up as he signs his first executive orders in the Oval Office of the White House on Jan. 20, 2021. (AP)
Promises related to deportations and detention

During the Trump administration, anyone who was illegally in the country was deemed a priority for deportation.

Biden, by contrast, has promised to protect from deportation veterans, members of the armed services and their spouses. The Department of Homeland Security could achieve this by deprioritizing such cases, said Lina Newton, a political science professor at Hunter College of the City University of New York.

Biden through an executive order Jan. 20 revoked Trump’s 2017 order expanding the categories of people prioritized for removal. Biden ordered his administration to review previous actions taken under Trump’s order and to issue revised guidance consistent with Biden’s policy. Biden’s action did not include a specific reference to veterans or armed services members and their families.

Starting Jan. 22, there will be a 100-day pause on deportations "for certain noncitizens ordered deported to ensure we have a fair and effective immigration enforcement system focused on protecting national security, border security and public safety," said David Pekoske, the acting secretary of the Department of Homeland Security.

Biden also promised to end for-profit detention centers. This might be more difficult to achieve.

One challenge involves terms of the contracts the federal government has with private companies.

Ending for-profit detention centers won’t mean an end to all immigration detention, said Richard Boswell, a law professor at the University of California Hastings College of the Law.

Immigration authorities would still be able to detain people in government-run facilities.

Biden's budget proposals can request funds to increase that personnel, but appropriating the funds would be up to Congress.

Likewise, Biden’s ability to deliver on his promise for a four-year, $4 billion assistance package for certain Central American countries will rely on Congress’ willingness to fund it. Biden argues that such investment is needed to address the factors driving Central Americans to the United States.

Pathway to citizenship for 11 million immigrants

This might be one of Biden’s most ambitious immigration policy goals. Presidents of both parties have long sought and failed to achieve major changes in immigration law that would allow millions of immigrants to get lawful permanent residence, and ultimately, the ability to apply for U.S. citizenship.

Senators passed immigration bills in 2006 and 2013. Both times, House Republicans did not address the proposals on the House floor. The 1986 Immigration Reform and Control Act, signed into law by Republican President Ronald Reagan, is commonly regarded as the last major legalization measure. The law allowed about 2.7 million people to get lawful permanent residence.

"When you are dealing with a legalization program, the most important thing is to not make it overly complicated with too many hurdles that have to be met," Boswell said. "At the end of the day, you don’t want to end up with a third of them denied."

Key factors to consider are date of arrival and whether the person is of good moral character, he said.

Also, the larger an immigration bill gets the more difficult it is to keep a majority happy, said Matt A. Barreto, a political science professor at the University of California, Los Angeles. "So a bill which is direct and to the point, and does not contain far-ranging and unrelated side provisions, will be much more efficient," said Barreto, who worked on the Biden campaign and directed its Latino polling and messaging research in the last few months of the election.

"I do anticipate that the Biden administration will be more sophisticated in making sure their policies can survive court scrutiny," Stidvent said.

Email interview, Matt A. Barreto, a professor of political science at the University of California, Los Angeles, Jan. 15, 2021

Phone interview, Veronica Vargas Stidvent, executive director of the University of Texas Center for Women in Law and a former special assistant for policy to President George W. Bush, Jan. 18, 2021

Phone interview, Richard Boswell, a law professor at the University of California Hastings College of the Law, Jan. 19, 2021