Lamar Smith
stated on September 21, 2013 in a flier mailed to constituents:
"In 2010, the non-partisan Government Accountability Office found that only 6.5 percent of the U.S.-Mexico border was under full control of the Border Patrol."

Continuing his call for more border security, U.S. Rep. Lamar Smith said in a flier recently mailed to his constituents, "In 2010, the non-partisan Government Accountability Office found that only 6.5 percent of the U.S.-Mexico border was under full control of the Border Patrol."

That’s not a lot of border. Is he right?

Kim Smith, a spokeswoman for the San Antonio Republican (whose district runs north into Travis County), emailed us a web link to a Feb. 15, 2011, GAO report describing the five levels of border security the Border Patrol used from 2005 through 2010. The agency has not announced a new official measure but has said it plans to do so this year.

No miles were classed under the lowest level of security. About 1,120 miles were described as "not acceptable for border security" -- two-thirds of these were "monitored," the third-highest level, and one-third were "low-level monitored," the fourth security level. 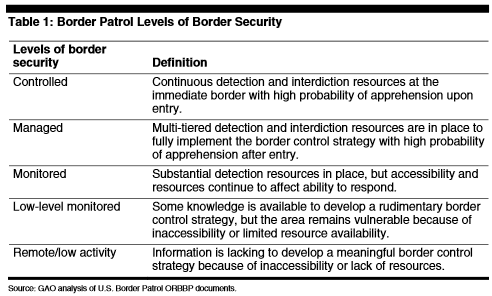 Edward Alden, a senior fellow at the Council on Foreign Relations nonpartisan think tank, told us by phone that "controlled," the highest level, meant agents and surveillance were directly on the border or within a few hundred yards. "The only places where the Border Patrol deems this necessary is in a very small number of what were historically high-traffic corridors, so San Diego, El Paso … mostly urban areas," he said.

"The reason you need to be on top of those areas," Alden said, is that "in an urban area, with El Paso and Juárez backed up together, if somebody gets over the wall, you know it’s a minute until they disappear into the streets of El Paso. The San Diego border, it’s a little farther, sort of a suburban area, but it’s pretty easy to disappear," he said.

"Managed," the second level of security, "can mean a series of cameras at various points, various distances from the border; it can mean physical patrols by the agents that two or three times a day go past the same area," Alden said.

"Most of the border’s unpopulated, and you’re miles and miles from the nearest road. … You’ve got a surveillance camera that spots somebody in Arizona crossing the border, they may have a two-day walk before they get to the road" -- less if they’re in a vehicle, he said, but still not requiring instant response.

Do any of the levels equate to "full control"?

A former head of the U.S. Immigration and Naturalization Service, Doris Meissner, now a senior fellow at the Migration Policy Institute, told us in an interview, "It obviously depends on what you define as full control," but after years of "incredible investment" along the border with Mexico, "crossings are dramatically down in almost all of the high-traffic areas ... Overall, the enforcement picture at the border is vastly improved from what it was ten years ago." In light of those facts, Lamar Smith’s statement "sounds misleading to me," she said.

Kay Bailey Hutchison
stated on December 2, 2009 in a campaign video
Says she has "quadrupled agents to secure our border."

PolitiFact has brushed on the border security buildup and drop in apprehensions before. We also found in a Sept. 6, 2013, fact-check that as many as 40 percent of undocumented U.S. residents didn’t get here by crossing a border illegally at all, but by overstaying their visas. The congressman’s flier notes the latter statistic alongside the border security claim in its section on "Supporting immigration enforcement."

At the border, complete control -- zero illegal entries -- is improbable, and isn’t the goal. Lamar Smith’s spokeswoman pointed out that the 2011 GAO report said, "Border Patrol stated that operational control does not require its agents to be able to detect and apprehend all illegal entries." In testimony to a House subcommittee Feb. 11, 2013, the GAO's then-director of Homeland Security and Justice, Richard Stana, said that the "resources that would be needed to absolutely prevent every single incursion would be something probably out of reasonable consideration."

Lamar Smith told us in an interview, "You make me think now, I wish I’d used the word ‘controlled,’ because ‘full control’ sounds so absolute that ‘controlled’ sounds to me to be less certain." But "the operative word is ‘control,’ I think, where they know they actually have a high probability of apprehending somebody who’s coming across," he said, adding that he also uses the 44 percent "operational control" figure when discussing border security."

Alden called Rep. Smith’s statement misleading because "operational control" -- the Border Patrol’s top two security levels, covering 44 percent of the border miles in 2010 -- meant the Border Patrol was detecting and responding to "90, 95 percent" of the illegal entry activity there, he said, pointing us to the appendices of the 2012 GAO report for details.

Using numbers in that report, a June 21, 2013, Washington Post news blog entry calculated "effectiveness" ratings for the nine border sectors -- the percentage of total estimated illegal entries in which the Border Patrol apprehended suspects or turned back suspects with a likelihood that they returned to Mexico: 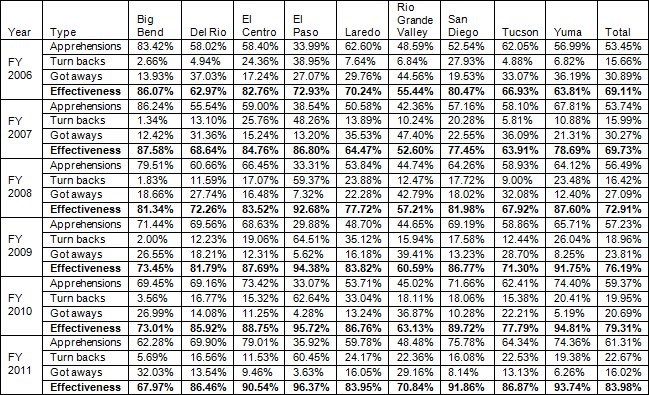 In fiscal 2010 and 2011, the nine Border Patrol sectors ranged from 63 percent to 96 percent effectiveness.

2010’s two highest-rated sectors accounted for 21 percent of the border’s nearly 2,000 miles and illustrate some of the physical differences Alden indicated.

El Paso’s 286-mile sector averaged 96 percent effectiveness across New Mexico and Texas terrain described in the report as "including mountains and arid desert with canyons," 88 miles of river border "and an urban metropolitan area." Of the sector’s 11 Border Patrol stations, seven were on the border and four in the interior.

Lamar Smith wrote, "In 2010, the non-partisan Government Accountability Office found that only 6.5 percent of the U.S.-Mexico border was under full control of the Border Patrol."

That report showed 6.5 percent of border miles in fiscal 2010 were under the Border Patrol’s top level of security, meaning agents and equipment were constantly present and monitoring the border -- a level of enforcement usually reserved for high-traffic urban areas.

But the rest of the border’s not a sieve. The same report said 44 percent of border miles were under what the agency considered acceptable levels of security.

We rate this claim, lacking such clarification, as Mostly True.

Washington Post news blog entry, "Border security is the key to immigration reform. So how do we measure it?," June 21, 2013