Republican Party of Florida
stated on October 29, 2015 in a Facebook post:
"How many concerts would Taylor Swift have to perform to pay off one day of interest on our national debt? She would have to perform every day for three years."

Pop superstar Taylor Swift is known for being generous to her fans. But is she charitable enough to help Washington pay interest on the national debt? 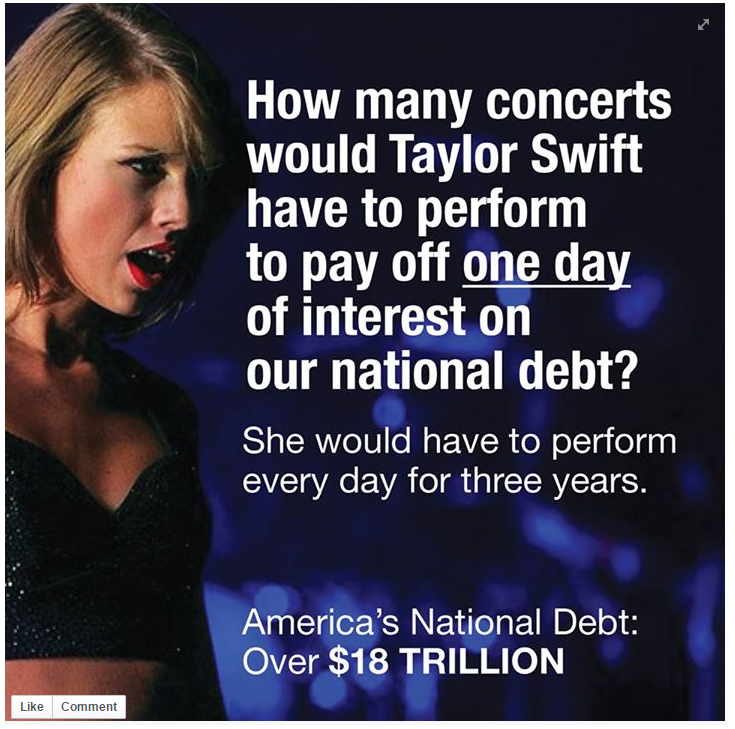 The #squad at the Republican Party of Florida asked (and answered) the question with a viral image on their Facebook page on Oct. 29, 2015, the same week Swift was in the Sunshine State for concerts in Miami and Tampa.

"How many concerts would Taylor Swift have to perform to pay off one day of interest on our national debt? She would have to perform every day for three years," the post read.

We just couldn’t shake it off. We wondered, would it take three years or more for the biggest pop star in the country to pay off the interest on the national debt, playing a concert every single night? We checked to see if it would be possible, even in our wildest dreams.

Because there’s no telling just how much Swift is personally raking in these days (beyond, you know, a lot), there’s going to be a lot of estimating here, possibly a blank space or two. But we do know the national debt is up over the $18 trillion mark these days, so she’s got her work cut out for her.

Just so we didn’t cause any bad blood, we reached out to the state GOP and asked them how they were figuring Swift’s tour schedule through 2019. They credited the stat to the conservative think tank the Heritage Foundation. We noted the original version was slightly different:

"How long would it take Taylor Swift to pay off our debt? Forbes estimates that T. Swift earned around $80 million in 2015 and performed 55 concerts. She would have to perform every day for three years to pay for one day of interest that accrued on our debt."

They also point out how hard other big names would have to work, like boxer Floyd Mayweather having to fight for every night for 331 years or Bill Gates having to fork over 229 lifetimes’ worth of personal income to pay the same bill. 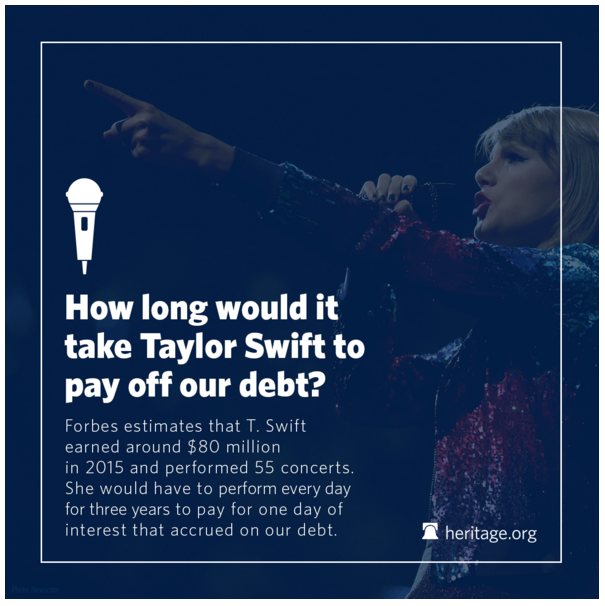 The foundation told us they figured out Swift’s workload by calculating that she took home 28.6 percent of the gross receipts from her March 2013-June 2014 Red Tour, then stretched it out as if she played for 365 nights straight. That ends up being $526,000 per show, or $192 million for a whole year of Swift concerts (and a whole lot of Instagrams).

So how much is the daily interest on our national debt? Heritage used the 2015 estimate for interest from the Office of Management and Budget, which was $229.2 billion for the year. One day of that is $628 million.

Break that down and Swift would have to play every night for just more than 3¼ years to pay for one measly day of interest on an $18 trillion debt.

Now, the Heritage Foundation told us they used the Red Tour because it has a full net estimate. But we here at PolitiFact Florida always like to note when everything has changed.

Swift is a megawatt star these days, and she has been practically printing money since this year’s 1989 World Tour began. The tour topped $185 million between May and mid October. That’s about about 60 shows, give or take, with 20-plus to go until Swift can take a breather.

Forbes and Billboard do generally use a third of gross receipts as a rough guideline — remember, those tours have to pay for all sorts of things besides the artist, like sets and costumes and roadies. The $80 million Forbes estimate for June 2014-June 2015 is hard to parse, because it includes all income, which could range from t-shirts to albums to streaming royalties.

We’ll note it’s really not possible to say what she makes from any given show, because every venue is different. The tour stood to make $2.75 million from her Halloween show in Tampa, with a $928,000 bonus if the show sold out. (We can’t confirm whether it did, but reports make it sound like it came close.)

In any case, we figure these days it's fair to say Tay Tay is worth closer to a very rough average of $1 million per show, especially when she's playing bigger arenas. That would really help her put a dent in the nation’s outstanding bills.

We could also cheat with some creative bookkeeping and use data from the Federal Reserve Bank of St. Louis, which puts 2015 debt interest at a slightly lower $223.3 billion. That works out to $612 million per day.

Do the simple math and our estimate knocks Swift’s theoretical slate of shows down to about 612 nights. That’s a little over 1½ years of concerts. But there’s always the chance she wouldn’t want to fork over all her earnings for the interest payments. She could use a little walking around money, you know? Also, she needs a little time to go home to cats Meredith Grey and Olivia Benson.

The Republican Party of Florida asked, "How many concerts would Taylor Swift have to perform to pay off one day of interest on our national debt? She would have to perform every day for three years."

This viral image was inspired by the Heritage Foundation, and while their math is based on old estimates, it stands up to scrutiny. We’ll note that Swift likely makes a lot more money these days, so she could probably pay the bill faster. But the point that it would take an inordinate amount of time to pay just a single day’s interest on the $18 trillion-plus national debt stands.

Daily Signal, "How Many Concerts Would Taylor Swift Have to Perform to Pay Off One Day’s Interest on the Debt?," Oct. 28, 2015