Hillary Clinton
stated on October 5, 2015 in her gun policy platform.:
"While 38 percent of (firearms) dealers that were inspected in 2011 were noncompliant with federal law, only 0.05 percent of inspected dealers had their licenses revoked."

"Due to lobbying efforts by the NRA, these bad actors are granted unique protections in our laws, and the country’s law enforcement agencies often face barriers when attempting to hold them accountable," reads the plan released Oct. 5. "While 38 percent of (firearms) dealers that were inspected in 2011 were noncompliant with federal law, only 0.05 percent of inspected dealers had their licenses revoked."

We were curious about her claim that less than a percent of firearms dealers found to be noncompliant had their licenses revoked by the Bureau of Alcohol, Tobacco, Firearms and Explosives, or ATF, the agency tasked with overseeing gun sales.

Clinton’s numbers are slightly off, but she’s right that it’s extremely rare for a noncompliant dealer to lose its license. Whether that means "bad actors" are getting away, however, remains up for debate.

Not a straight shot to revocation

Clinton’s spokesperson Josh Schwerin told us the campaign got its figures from a 2013 Justice Department audit of the ATF following the Sandy Hook shooting.

According to the audit, the ATF found 62 percent of more than 10,000 inspected gun dealers did not violate firearms law in 2011. Clinton’s campaign took this to mean that 38 percent of dealers were noncompliant.

But the actual figure is closer to 31 percent, because about 6 percent of gun dealers were categorized as "other" and an additional percent opted to give up their license.

Out of the noncompliant dealers, only 71 had their licenses revoked. That’s 0.05 percent of all dealers active that year (over 120,000), but 0.68 percent of inspected dealers. Clearly, both are small numbers.

Why do so few noncompliant dealers get their licenses revoked?

For starters, the Firearm Owners Protection Act of 1986 stipulates that the ATF can only take away licenses when the dealer is "willfully" violating the law. So rather than revoking licenses automatically, ATF gives dealers chances to redeem themselves.

If the ATF finds that a dealer has been noncompliant, it first issues a report of violations. More significant violations — for example, not properly logging gun acquisitions and gun sales — or repeated paperwork errors prompt a warning letter or a warning conference. In 2011, as with most years, 97 percent of noncompliant dealers agreed to make changes to become compliant.

"There’s a difference between people having a hard time trying to do the right thing versus people who don’t have any interest in doing the right thing at all," said Suzanne Dabkowski, a public information officer and industry operations investigator at ATF’s field division in Columbus, Ohio. "Most people do seem to want to do it correctly."

According to the ATF, it’s rare for a dealer to demonstrate a blatant disregard for the law — "willful" noncompliance. This can include serious violations like knowingly selling to straw buyers (someone buying a gun for someone else who wouldn’t be able to pass the background check) or minors or consistently ignoring ATF warnings, said Mike Bouchard, a former ATF assistant director for field operations.

Only in those cases does the ATF recommend revocation, and a separate process kicks in. The recommendation first goes through ATF internal review, including legal consultation. If the recommendation is approved, the dealer can request a hearing and make the case that its violations were not willful. Should the ATF decide to press on, the dealer can take the case to the U.S District Court.

With all this back and forth, revoking a license can take over two years, according to the Dept. of Justice audit. Meanwhile, dealers facing pending license loss can and do still sell firearms.

In her gun plan, Clinton promised to increase ATF funding and "aggressively enforce current law" to weed out rogue dealers.

It’s important to note license revocation requires an extremely high burden of proof, thanks to the "willful" violation requirement, according to Lindsay Nichols, senior attorney for the Law Center to Prevent Gun Violence.

For example, she said, if a dealer is selling guns without background checks, it could falsely claim that it just forgot to create the required record. Similarly, it would be very difficult for the ATF to prove that a dealer is abetting a straw purchase "unless there is video or audio footage," Nichols said.

Gun dealers, however, contend that the inspections regime ensures due process. Many violations reported by the ATF are paperwork mistakes that don’t endanger the public (i.e. writing "Y" instead of "Yes"), said Larry Keane, the senior vice president of the firearms industry’s trade association, the National Shooting Sports Foundation.

"The dealers have certain rights, and ATF has certain rights to shut them down if they’re bad apples," he said. "No one minimizes the paperwork violations. That still results in warning letters or more. ...The idea that dealers are selling guns to criminals willy nilly is just false."

Many of the most common violations are indeed paperwork errors, but the list also includes not obtaining identification, not reporting multiple handgun sales, and selling guns to someone likely to be prohibited from purchasing a firearm. Here’s a snapshot: 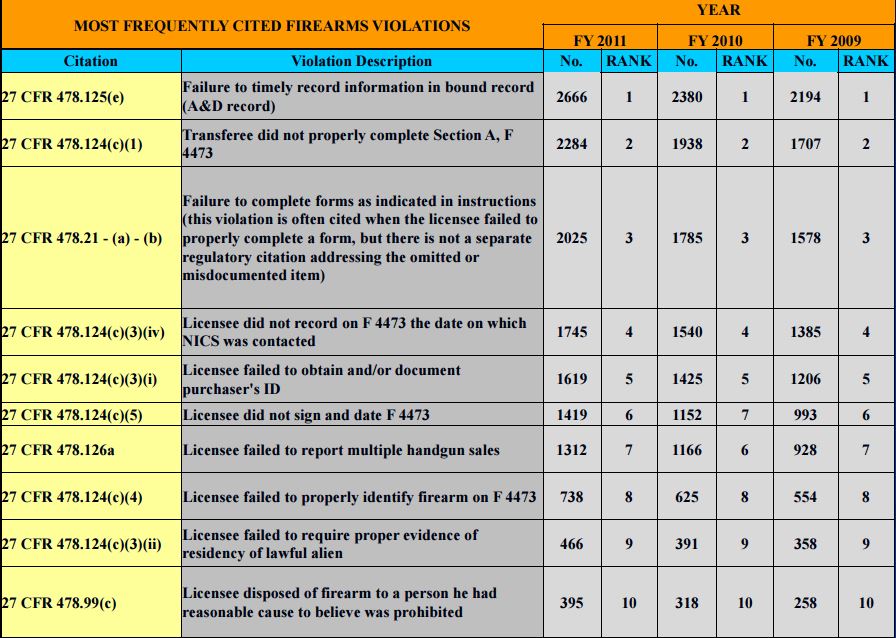 If bad dealers are getting away, said Bouchard, "it’s a resource issue."

ATF’s staff size, 2,500 agents, hasn’t increased in four decades unlike other law enforcement agencies. To conduct all the inspections due in a year, the agency would need to increase its manpower by 45 percent, according to the Dept. of Justice.

On top of that, by law, the ATF is not allowed to keep a centralized electronic database, and it must prioritize other duties (i.e. explosives inspections) over cyclical inspections of firearms dealers.

As a result, 58 percent of dealers haven’t been inspected within five years, the legal requirement. In practice, visits actually come only once a decade, reports the Washington Post.

"There are so few agents and inspectors to do all the work," said Bouchard.

Clinton said, "While 38 percent of dealers that were inspected in 2011 were noncompliant with federal law, only 0.05 percent of inspected dealers had their licenses revoked."

The numbers are slightly off. About 30 percent of inspected dealers had violated firearms regulations in 2011, and about 0.7 percent of them had their licenses revoked.

That’s because revocations are only allowed when the dealer is "willfully" violating the law, which some say is a huge legal obstacle. The inspections and revocations process gives noncompliant dealers the chance to demonstrate willingness to comply, and the vast majority say that they will.

Interview with Janice Kemp, spokesperson for the Bureau of Alcohol, Tobacco, Firearms and Explosives, Oct. 6 and 7, 2015

Email interview with Jon Vernick, co-director of the Hopkins Center for Gun Policy and Research, Oct. 6, 2015

USA Today, "The agency that enforces the nation's gun laws is falling behind on inspections of gun dealers," April 23, 2013