Editor’s Note: A week after we published our fact check, a Sacramento Superior Court judge ordered campaigns for and against Prop 64 to soften their claims about what the initiative would do. The No on Prop 64 campaign was ordered to change claims similar to Feinstein’s statement at the center of this fact check. Claims such as "marijuana smoking ads will be legal on all broadcast primetime shows" were dialed back to "could be allowed." On the Yes on 64 side, however, the judge ruled there should be "No change" to that campaign’s statement that "Nothing in 64 makes it legal to show marijuana ads on TV. Federal law prohibits it!" We continue to view Feinstein’s claim that Prop 64 "allows" recreational marijuana ads on TV as misleading. Had the senator said Prop 64 could open the door, someday, to recreational marijuana ads on TV, that might have been accurate. We continue to rate her statement Mostly False.

Californians will decide in November whether to legalize recreational marijuana through Proposition 64, a much-debated measure on the state’s ballot.

Prop 64 "allows marijuana smoking ads in prime time, on programs with millions of children and teenage viewers," Feinstein said on July 12, 2016, in a No On Prop. 64 campaign press release.

We know Prop 64 would allow Californians to legally smoke pot in their homes, yards and possibly in designated shops where it’s sold and regulated.

But would it also lead to marijuana ads on "prime time" TV? Or is Feinstein blowing smoke? We decided to fact-check the senator’s statement.

Prop 64 is backed by Democratic California Lt. Gov. Gavin Newsom and the California Democratic Party. Recreational marijuana is already legal in Colorado, Washington, Alaska, Oregon and Washington D.C. Several states in addition to California are set to decide on legalizing pot in November.

Feinstein’s office did not expand on her statement. Instead, it referred us to the No On Prop. 64 campaign.

The campaign pointed us to Prop 64’s chapter on advertising and marketing restrictions, specifically Section 26151.

It states: "Any advertising or marketing placed in broadcast, cable, radio, print and digital communications shall only be displayed where at least 71.6 percent of the audience is reasonably expected to be 21 years of age or older, as determined by reliable, up-to-date audience composition data."

Wayne Johnson, spokesman for No On Prop. 64, said the 71.6 percent threshold is so low that only a few shows, such as Saturday morning cartoons, would be prohibited from airing marijuana ads.

"It’s a ridiculous standard," Johnson said. "It only applies to the tiniest handful of shows." 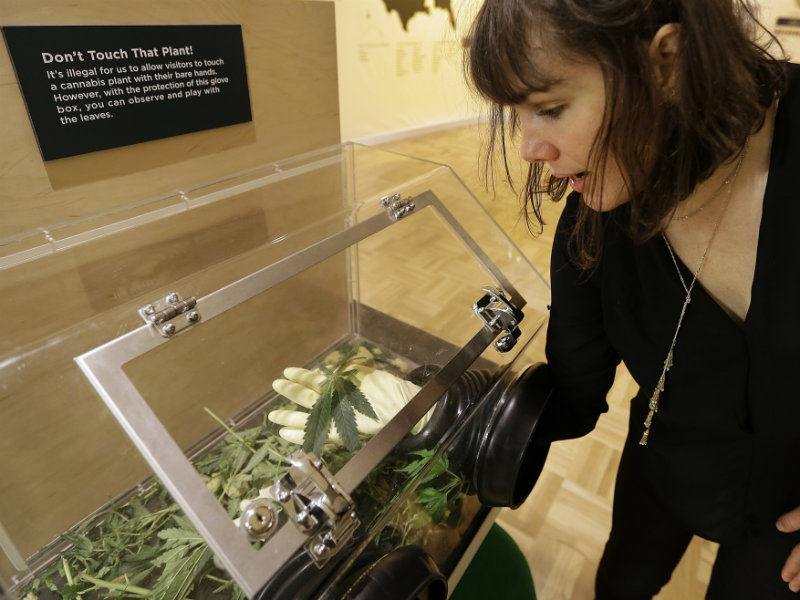 In this photo taken on Thursday, May 26, 2016, Sarah Seiter, curator of the exhibit "Altered State: Marijuana in California" handles a cannabis leaf with gloved hands at the Oakland Museum in Oakland, Calif.  Ben Margot / AP

TV and legal experts say Feinstein’s statement ignores federal law, which classifies marijuana as an illegal drug and prohibits advertising it on television.

"If Prop 64 passes, nothing will change in terms of what radio and television stations can legally broadcast," said Joe Berry, president of the California Broadcasters Association. "The federal government licenses the radio and TV stations in California. The federal government’s position is that marijuana is an illegal substance. So, it’s illegal to advertise that substance."

Berry added: "The stations themselves are federally licensed. So, there is a risk to the license for the station at license renewal."

They point to Section 843 of the Controlled Substances Act, which specifically prohibits using "communications facilities" to transmit advertisements for the sale of Schedule I drugs, which includes marijuana, heroin and ecstasy, among others. The law was passed by Congress and signed into law by President Nixon in 1970.

It defines "communications facilities" as any and all public and private instrumentalities used or useful in the transmission of writing, signs, signals, pictures, or sounds of all kinds and includes mail, telephone, wire, radio, and all other means of communication."

Others say the legality of advertising marijuana on television -- particularly in states that have legalized the drug -- remains cloudy, at best.

"There is no (Federal Communications Commission) rule that prohibits such advertisements in states with legalized cannabis," Kathleen Kirby, a media lawyer based in Washington D.C., told PolitiFact California in an email.

A spokeswoman at the FCC could not point us to one, and declined to elaborate on the subject.

Kirby said several of her clients in states where pot is legal have been approached to run marijuana advertisements.

"I don’t say no, but I counsel," regarding the lack of clarity, Kirby told the American Bar Association in an online article.

Kirby noted in the December 2015 article that all of her clients had decided to hold off on the ads.

She added in her email to PolitiFact California that federal law "would need to change to make accepting such ads risk free. The feds have more or less signaled that they will look the other way, but you never know with changes in administration or even changes in federal prosecutors."

No TV ads in other states

In recent years, federal drug enforcement authorities have taken a ‘hands-off’ approach on the sale and cultivation of marijuana in states that have legalized and regulated the drug. That doesn’t necessarily mean they’ll look the other way on federal advertising rules, said Douglas Berman, a law professor at Ohio State University and editor of the Marijuana Law, Policy and Reform blog.

A local TV station in Colorado had planned to run the nation’s first marijuana TV advertisement in 2015, but backed away over concerns about federal rules.

Stations have yet to air any marijuana ads on television, Berman said.

Those ads would be treated "from a federal regulatory perspective as equivalent to if you were broadcasting (ads for) heroin," the law professor added.

The Yes on Proposition 64 campaign filed a lawsuit in Sacramento Superior Court in early August demanding what they described as "false and/or misleading statements" -- including the claim about marijuana ads on TV at the center of this fact check -- be removed from the official ballot arguments submitted by the measure’s opponents.

Efforts to change federal law are underway. But it’s unclear if, when and how much the law will change.

Berman said California’s provisions, if approved through Prop 64, could pave the way for advertising on TV, but only if the federal rules change first.

"It ain’t happening anytime soon," he said. "Certainly, it’s not something that’s going to automatically happen based on how California votes this fall."

Proposition 64 includes a provision that marijuana advertisements "shall only be displayed where at least 71.6 percent of the audience is reasonably expected to be 21 years of age or older."

If Feinstein had said Prop 64 helps pave the way for marijuana ads on TV, that might have been accurate.

But experts say Feinstein’s claim, as she stated it, is misleading. The federal Controlled Substances Act bans TV stations from advertising illegal substances, including marijuana.

There’s an element of truth to Feinstein’s statement: The FCC doesn’t have a rule expressly prohibiting marijuana television ads in states that legalize the drug. And federal authorities could choose to ignore the Controlled Substances Act.

Still, the experts we spoke with say California’s Prop 64 will not lift the legal cloud of uncertainty by itself. Feinstein’s statement goes too far.

We rate her claim Mostly False.

American Bar Association Journal, "Can marijuana ads be shown on TV in states where it's legal? Broadcasters aren't so sure," Dec. 1, 2015